25 classmates were hurt in a horrific crash. The recruits who remain fight through pain 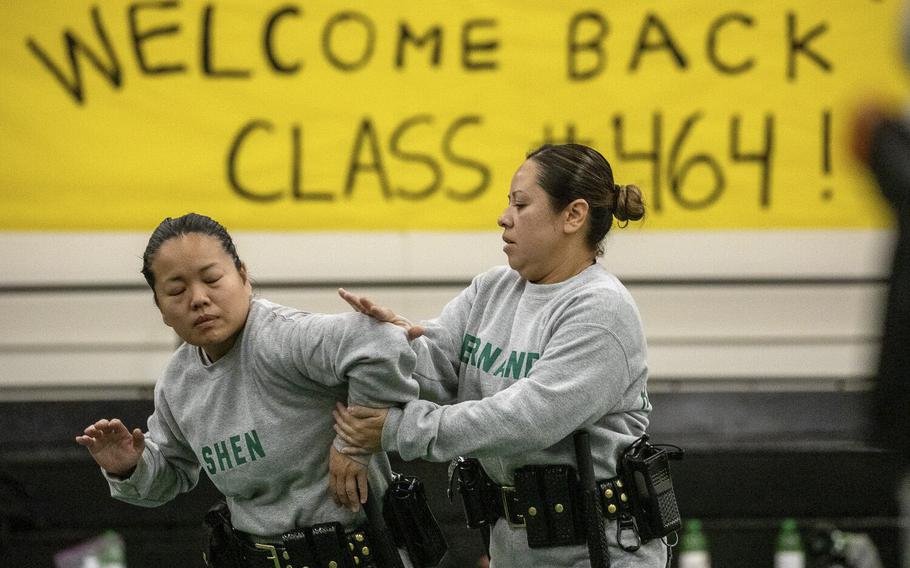 Los Angeles County Sheriff recruits Class 464 go through defensive tactics class at STAR Center Academy in Whittier, Calif., on Nov. 30, 2022, after returning to the academy after a crash that landed 25 of them in the hospital earlier in November. (Irfan Khan/Los Angeles Times)

(Tribune News Service) — Academy Class 464 is smaller than it was three weeks ago.

The loss is most evident when the law enforcement recruits stand in formation. There are empty spaces where nine classmates should be.

Where they would have been if an SUV hadn’t veered into the wrong lane during an academy training run last month in South Whittier. If it hadn’t struck dozens of the young hopefuls before crashing into a lamppost. If it hadn’t sent several of them to the hospital.

After the Nov. 16 crash, three recruits remain hospitalized. One is in a coma; another just woke up. Six others are recovering at home.

The remaining classmates this week returned to the Sheriff’s Training Academy and Regional Services, or STARS, Center. The Sheriff’s Department granted The Times access to the academy Wednesday but requested that the recruits not be interviewed due to the ongoing investigation.

The driver, Nicholas Gutierrez, was arrested on suspicion of attempted murder of peace officers but was released the day after the crash. Gutierrez’s lawyer said the 22-year-old fell asleep at the wheel on his way to work.

No case has been presented to the district attorney’s office, according to a spokesperson, so Gutierrez has yet to be charged with a crime.

At the academy, the recruits’ schedules have been filled with meetings with well-wishers, including the outgoing Los Angeles County sheriff and students of law enforcement academies across Southern California. The recruits, they hope, are getting their lives back on track.

“Their mindset is, ‘Hey, I’m doing this for my fellow recruits who are in the hospital, for my recruits that aren’t going to be here or may not make it through this class,’” said Lt. John Haynes, who heads the force training unit at the academy. “To see that is just impressive.”

Haynes, who has been with the Sheriff’s Department for 26 years, refers to the recruits as kids, “because they feel like mine.”

“We’ll go through a career, and some of us will never see what these kids have seen,” Haynes said.

On Sept. 22, 76 recruits started the training program at the STARS Center. There were recent college graduates, military veterans — four from the Marine Corps — and some in search of a career change. They made up Class 464.

To secure their spots, they underwent aptitude, physical agility and psychological tests. Investigators combed through their lives, interviewing neighbors, family members and former teachers and supervisors. Once cleared, they were eligible to enter the academy.

The men and women would spend 22 weeks there, before graduating and launching their careers in law enforcement. The majority were recruits for the L.A. County Sheriff’s Department, although smaller police departments had also sent candidates to be trained.

In the first few weeks, the class learned about military and police traditions. They wore uniforms and got into military formations. They prepared for weapons inspections. Most important, over the 40-hour workweeks, they focused on being a team.

“They have to learn how to work together as one unit first before they can learn anything else,” said Capt. Pat Macdonald, who leads the Sheriff’s Department’s training bureau. “Because in this profession, you’re counting on your partners all the time.”

Eight weeks into Class 464’s time at the academy, that training was put to the test.

On the morning of Nov. 16, the recruits were on a four-mile training run. They were building up to their “Colors Run,” which would be dedicated to a fallen officer and would help them earn patches for their uniforms.

Dressed in green shorts and white T-shirts, the recruits were running in formation around 6:30 a.m., accompanied by six instructors and two black-and-white radio cars. They were a mile into their run and had just passed Fire Station 96 on Mills Avenue when those at the front of the group spotted a Honda CR-V approaching.

“Vehicle from the front,” they called back.

The SUV veered to the wrong side of the road and into the group. The runners at the front were able to get out of the way before the SUV struck others and crashed into a lamppost.

Macdonald was three-quarters of a mile away when he received the call that a vehicle had driven through the members of the class. He arrived at the scene within minutes. There were bodies everywhere.

“I’ve been on the department almost 28 years, and I’ve never seen anything like this, to where it looked like bodies fell out of the sky, and so many people were in need of medical attention at one time,” Macdonald recalled.

The recruits, who had taken a CPR test earlier that week, had already sprung into action, rendering aid to classmates who were more severely injured.

“They immediately had to shift from ‘I’m on a run’ to ‘I have to save my partner’s life.’ And ‘my partners’ [lives],’ plural,” Macdonald said. “We couldn’t have asked them to do any more than they did in such a small time being in law enforcement.”

Twenty-five recruits were injured, five of them critically, with head trauma and broken bones. One was placed on a ventilator and listed in grave condition. The weekend after the crash, Sheriff Alex Villanueva swore him in as a full deputy.

The class received psychological services and took Thanksgiving week off. After reevaluating, the recruits returned Monday.

“Their dream is to be deputy sheriffs,” Macdonald said, “and they all wanted to come back.”

Before the sun rose Wednesday, 65 recruits assembled on a green mat inside the academy gym. Dressed in gray sweats, with their last names printed on the front and back, they stood in formation, facing a yellow sign that read “Welcome back class #464!”

The bleachers were littered with green water bottles, each stamped with a recruit’s name, platoon and blood type. There were zip-close bags with bananas and protein bars.

The women, more than a dozen of them, had their hair pulled back in tight buns. The men’s hair was closely cut.

“Everybody line it up, two rows, let’s jog it around,” the defensive tactics instructor, Arin Davidian, shouted.

The class was warming up to spend the morning reviewing defensive tactics. The crash had delayed a scheduled test, and the instructors wanted to make sure the recruits were ready.

“Obviously, we’re easing them back into it. We understand that we still have a job to do, but it’s going to be a slow process,” said Robert Mason, the lead staff instructor for the class. “In talking to a lot of the recruits, they don’t want training to change. By us doing that too, it’s keeping their minds off of it. ... It’s still there, it’s never going to go away, but this definitely helps.”

On Monday, the recruits were greeted with applause and balloons. Other law enforcement academy recruits arrived to offer support and give the class a display case of police patches. The Louisville, Ky., police department uploaded a video of its academy class finishing the remaining three miles of the STARS recruits’ run in honor of Class 464.

The recruits had their first physical training session Tuesday.

“There were a couple of people you could tell [the crash] was on their mind. It was the first time we got back in our PT gear and all the stuff that we did the day of the incident,” Mason said.

There were other reminders: the empty spaces in the formation, the gym that had served as a gathering place for recruits and family members after the crash, the two recruits in the bleachers, crutches beside them. There were also the speaker who dropped by to offer her support and a sergeant whose son had been killed by a different wrong-way driver in a different accident.

But on Wednesday, the recruits seemed focused on the task at hand. They grabbed their belts, loaded with handcuffs, batons and firearms. Their instructors did a weapons inspection to ensure that guns and magazines were empty of ammunition before class started.

Davidian, dressed in green tactical pants, walked them through control holds to use when apprehending a suspect. They practiced on their partners. At times they smiled at one another or flashed a thumbs up.

The click of handcuffs echoed throughout the gym as each person was “apprehended.” By the end of the training, many were drenched in sweat.

“Great job — this is what I like to see,” Davidian said as they huddled up. “Everyone’s come back together.”

The academy’s halls are decorated with framed photos of recruit classes dating back to 1989.

Early next year, Class 464 will pose for its photo. Recruits who started with the rest of the class will be missing — maybe nine, maybe more. But those separated from their class will be kept on as county employees until they are rehabilitated and can return to finish the academy.

“When they’re healthy, we’ll bring them right back,” Macdonald said.

And if they can’t? No one is talking about that now.

For the foreseeable future, the recruits will not be running on the streets of Whittier. The Colors Run, though, will continue.

But this one won’t honor a fallen law enforcement officer.

This one will be dedicated to Academy Class 464.