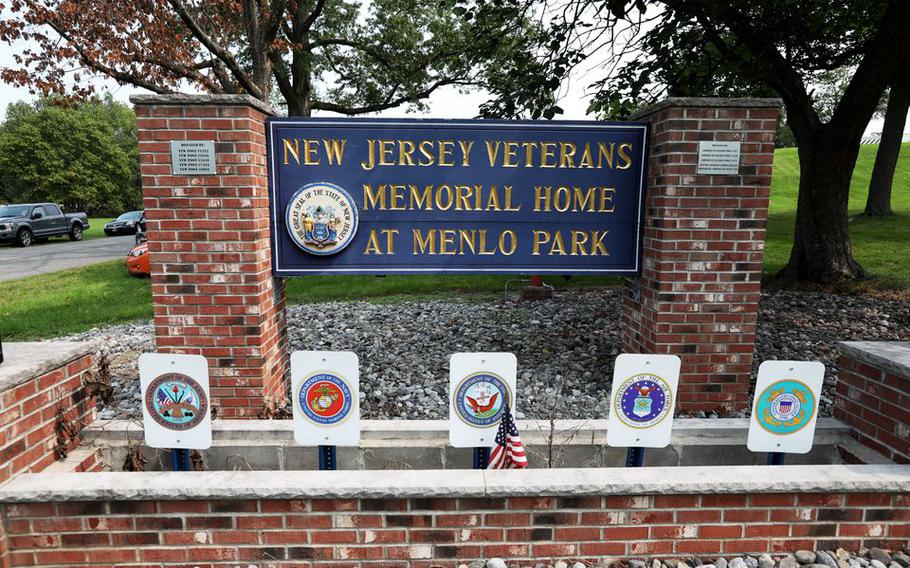 The entrance of New Jersey state-run Menlo Park nursing home for veterans, where at least 65 residents and one staff member died as a result of the coronavirus in Edison, N.J. September, 16, 2020. (Ed Murray/NJ Advance Media)

Gov. Phil Murphy on Wednesday ordered state Department of Military and Veterans Affairs to seek an outside vendor “who can manage systemic changes and provide qualified, administrative staff to help lead these initiatives.”

The move comes after the U.S. Centers for Medicare and Medicaid Services last week cut off federal funding for new admissions at the Veteran’s Memorial Home at Menlo Park after major shortcomings in care and deficiencies in pandemic infection control led to a declaration that residents at the nursing home in Edison were in “immediate jeopardy.”

CMS said on Tuesday that the facility was “currently not in substantial compliance,” threatening fines and other penalties, and warned it could see permanent termination of all Medicaid and Medicare funding by March if the situation at Menlo Park is not corrected.

“Denial of payment for all new admissions began on Nov. 22, because the ongoing quality concerns have not been addressed,” said CMS spokesman Bruce Alexander.

Veterans Affairs officials say they are contesting the CMS findings.

In response to crackdown by federal regulators, the Murphy administration last week deployed a so-called “Mission Critical Team” to Menlo Park, including a nurse consultant and an administrator with expertise in running long-term care facilities.

In the governor’s action late Wednesday afternoon, Murphy separately directed the Department of Military and Veterans Affairs, or DMAVA, to issue a request for proposals bring in a vendor who would be responsible for improving operations at all three of the state’s veteran’s home homes, including initiatives to train leadership, and to review current job descriptions, policies, and procedures to revise them as necessary.

Under that plan, the vendor will be required to provide a qualified team of administrative staff, including a chief executive officer and a chief nursing officer.

“Improving the care our veterans are receiving in each of the three state-run veterans homes remains a crucial priority of my administration,” said Murphy in a statement. “Sending a Mission Critical Team into Menlo Park to guide and advise facility staff was an important step in working towards this goal, but is certainly not the only step we must take.

He said by seeking experienced leadership to oversee systemic reforms and bring seasoned staff on board, “we will harness the expertise and impartiality of an outside vendor to ensure the implementation of thorough, long-lasting reforms in these homes.”

The vendor would immediately assume the role of interim CEO while working to find a replacement for the position. Changes will be made at Menlo Park before occurring at the other two veterans homes in Paramus and Vineland.

The Department of Military and Veterans Affairs is not only responsible for the veterans’ services, but also is in charge of the 8,400 members of Air and Army National Guard, as well as programs for military families and the Brigadier General William C. Doyle Veterans Memorial Cemetery.

State Sen. Joseph Vitale, D-Middlesex, who has long pushed for better care in the state’s nursing homes and has been sharp critic of the management of the veteran’s homes, applauded the governor’s move, calling it absolutely critical.

“Our veterans held up their end of the bargain, it’s our time to hold up ours,” he said.

Vitale along with state Sen. Joseph Cryan, D-Union, had been pushing for the state to step back from its control of the veteran’s home.

“Our veterans deserve experts who understand all aspects of long-term care management and can bring that expertise into these homes to give New Jersey’s veterans the quality of care they deserve in honor of the sacrifices they have made on behalf of this nation,” Cryan said.

But Glenn Osborne, a longtime resident of Menlo Park and the president of the residents’ council there, expressed doubt that the move would work.

“The two groups that will suffer are the nursing staff — especially the good dedicated staff — and the most important people, the veterans,” Osborne told NJ Advance Media.

Brig. Gen. Lisa J. Hou, the Adjutant General of New Jersey and Commissioner of the New Jersey Department of Military and Veterans Affairs, said the department was “moving aggressively to ensure the highest standards of care for the veterans, veteran spouses, and Gold Star Families in our care.” and welcomes what she characterized as the “anticipated support.”

The issues at Menlo Park surfaced after state health evaluators conducted an inspection in August and September of the 312-bed nursing home, which cares for military veterans and their spouses. Those inspection reports outlined major charges of improper care and abuse.

In one incident, a registered nurse who apparently did not know how to remove a Foley catheter — a skill taught in nursing school — simply cut it with a scissor. The resident had to be taken to the emergency room to remove the rest of tube that had been placed in the bladder to drain urine, and then transported to a hospital to be treated for a urinary tract infection.

When a certified nursing aide with experience in the procedure was asked why she had not spoken up while watching the nurse cut the catheter, she was said to have replied: “She is an RN. She is supposed to know,” the inspectors said.

The RN was subsequently suspended and then terminated.

And the facility reportedly failed to conduct contact tracing to contain what became a massive COVID-19 outbreak that began last Thanksgiving, inspectors charged. Menlo Park was cited for failing to “ensure that staff who were exposed were tested prior to working at the facility,” and failing to ensure that federal, state, and infection control guidelines were followed.

The state veteran’s homes had among the highest death rates in the country from the pandemic. COVID claimed the lives of more than 200 residents and staff in all three veteran’s homes, according to the state, although one attorney who represents dozens of families who sued the state suggests the number of fatalities may actually be more than 240.

The facilities went through earlier major changes following its well-publicized failures during the pandemic. Elizabeth Schiff-Heedles, the former CEO of Menlo Park, was fired in October 2020 as part of a wide-ranging shakeup by Murphy in response to the deaths there.

Jay Boxwell Jr., state commander for the Veterans of Foreign Wars of New Jersey, said he is glad Menlo Park is getting some sorely needed attention, but was leery of privatizing the operation. He pointed to the privatization that took place at the two county-owned nursing facilities in Middlesex County — which Vitale touts as a model worth emulating — saying that while the operation improved, but residents complain the operator takes the vast majority of their monthly income to support the facility. That shouldn’t be allowed at the veterans homes, which relies on far less of the residents’ income, he said.

Boxwell said the department of Military and Veterans Affairs must maintain a hand in the operation to ensure these facilities are “veteran-centric.”

“They must understand the unique needs of the veteran population, and you maintain the social comradery that is required for a veteran population,” he said. “We are a unique culture. We understand each other issues — that is what bonds us together. These were outstanding facilities before COVID.”

The VFW continues to meet with the Hou, the department commissioner, about its wish to redesign the rooms at Menlo Park so they are single-occupancy only and provide negative pressure ventilation, to curb the spread of airborne disease. He said left a meeting with Hou on Wednesday, encouraged that she said she supports the project.

In the past year, the Murphy Administration paid $68.8 million in settlements with the families of 190 deceased veterans home residents who had sued for gross negligence and incompetence by administrators during the height of the pandemic.

In August, Menlo Park employees filed suit against the state, saying the decision to penalize people for wearing masks and failing to prevent the spread of the coronavirus put their lives at risk.

Paul da Costa, who represented many of the families and now the employees, said he was heartened by the actions being taken by the state, “although it certainly was needed long ago.”

He added that the statements in the governor’s press release “contains some disturbing admissions, which my clients and I have been asserting for the last two years: that the administrators tasked with running these veterans’ homes were not qualified, not skilled and clearly incompetent.”

“He also questioned why the department of Military and Veterans Affairs will still oversee the outside contractor, “given its track record.”