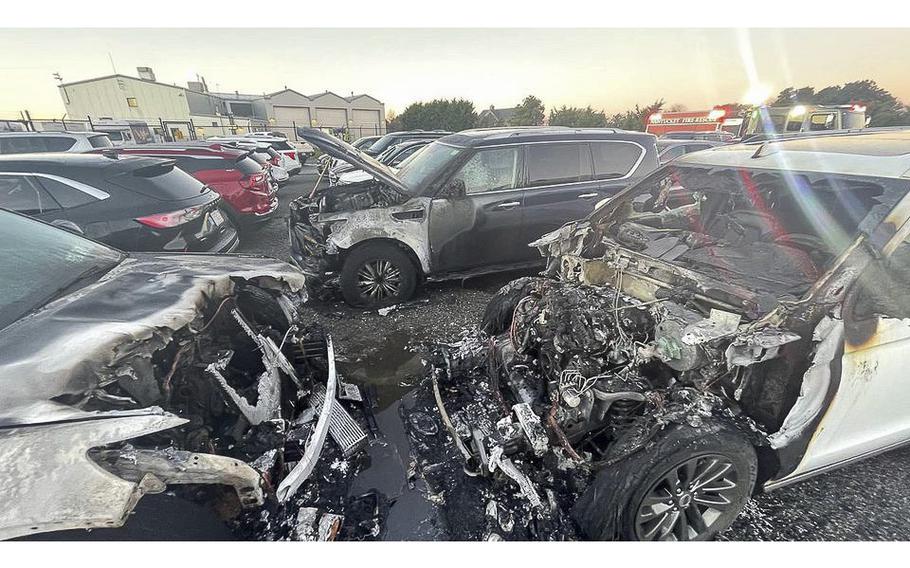 Multiple cars that were reportedly rented by members of President Joe Biden’s Secret Service. team burst into flames at the Nantucket Memorial Airport on Monday, Nov. 28, 2022, following Biden’s visit to the island for Thanksgiving. (Luis Fieldman via TNS)

Footage captured by the Nantucket Current showed at least five cars with significant damage in a video posted to Twitter on Monday morning. There were no reported injuries and the fires happened just 40 feet away from the airport’s 25,000-gallon jet fuel tanks, the outlet reported.

The investigation into the cause of the fire is ongoing but the Current reported that one vehicle, a Ford Expedition, was under a safety recall due to a faulty battery junction box that has caused fires.

The local news outlet reported that the vehicles towed from the scene were a Chevy Suburban, Ford Explorer, Infinity QX80, Ford Expedition, and a Jeep Gladiator.

The cars were reportedly owned by Hertz and were used by the president’s Secret Service before they caught fire, according to the Nantucket Current.

The Nantucket Airport tweeted that it had closed the area for a brief period of time Monday morning and that the fire’s cause was unknown.

Airport staff reportedly spotted the fire before 5:30 Monday morning and Nantucket police and fire responded to the incident.