Macron to promote nuclear tech in US visit, while France’s plants fade 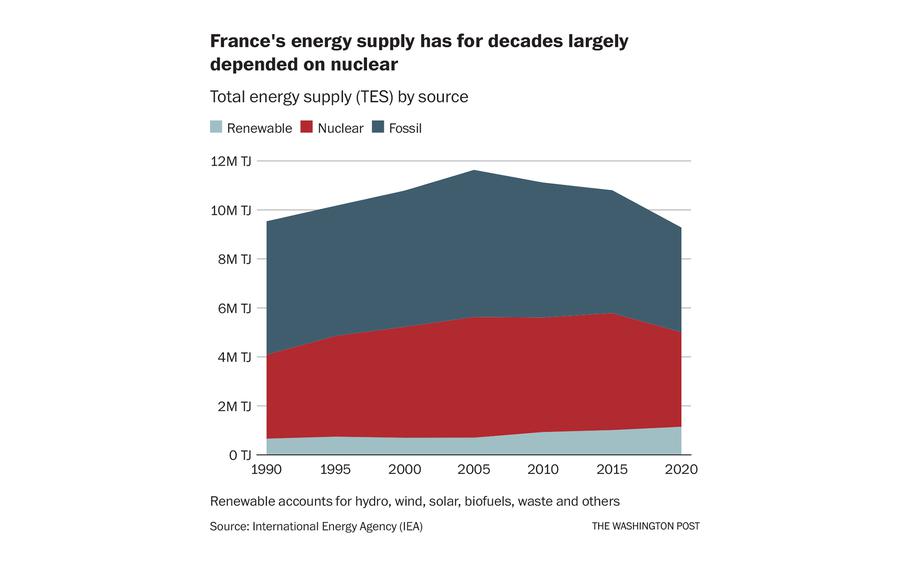 PARIS — As French President Emmanuel Macron makes the rounds in Washington starting Wednesday for the first state visit of the Biden administration, high on his agenda are his plans for a nuclear energy “renaissance.” His entourage includes the major players from France’s nuclear energy industry, who will be looking to the French leader to help boost the development and export of their technology, including smaller and more versatile reactors.

But there could hardly be a more awkward time to promote French nuclear know-how.

While Macron was preparing to head to Washington, France was relying on planes going in the opposite direction to prevent its nuclear-reliant power grid from collapsing. U.S. and Canadian contractors have been flown in to help, after safety concerns forced the closure of half of the country’s nuclear power plants. Last week, 23 out of 56 were still offline, due to concerns over corrosion cracks and an accumulation of pandemic-related inspection delays.

This year could have been an opportunity for the French nuclear industry to demonstrate the promise Macron has talked about. In February, he announced that country intends to build up to 14 new reactors by 2050. Days later, amid the Russian invasion of Ukraine, Europe began turning away from Russian fossil fuels. Countries that had already chosen to abandon nuclear energy were suddenly interested again.

But instead of bolstering its position as an energy exporter, France has had to import electricity from Germany - the country hit hardest by the shift away from Russia. And Britain, which normally depends on France for energy to get through winter, is talking about having to encourage people to keep their ovens and dishwashers off to avoid blackouts.

Other French neighbors, including Belgium, Switzerland and parts of Italy, may be at an even bigger risk as a result of the French reactor problems, said Clement Bouilloux, country manager for France at energy consultancy EnAppSys.

“Everyone was relying on the French nuclear power plants,” he said.

The situation has tarnished France’s reputation as a nuclear power leader, and may have contributed to the country missing out on key contracts. Only weeks ago, France’s state-owned energy company EDF lost the first part of a $40 billion contract for Poland’s first nuclear power plant to U.S. company Westinghouse.

While the U.S. and France are aligned in their response to Russia’s invasion of Ukraine, they are often competitors when it comes to civilian nuclear energy.

But with Russia and more recently China having emerged as dominant forces in that market, French officials say that transatlantic partnerships would benefit both them and the U.S.

“We have a strong base,” said a French official, speaking anonymously for protocol reasons, “and we have the same challenges.”

Energy consultancy Enerdata said in an assessment last year that while the United States “had an historic leadership in the sector,” its nuclear energy industry has “become sluggish in comparison to Russia and China.”

Almost 90 percent of the world’s new reactors in the past five years have been Chinese or Russian designs, according to the International Energy Agency. The two countries also control more than 60 percent of the globe’s converted uranium that is needed for nuclear power production.

But amid the lingering effects of the pandemic and Russia’s ongoing invasion of Ukraine, “domestic economic slowdowns and international sanctions will be a stress test for the export potential of Russia and China,” Sung-Mi Kim, an international security researcher, wrote in a recent analysis for Chatham House.

Bolder efforts by the United States - still the only country in the world that has more operational power plants than France - could speed up research and development on rival technology, and potentially yield room for cooperation.

But it could also imply fiercer competition between Western allies. When U.S. Energy Secretary Jennifer Granholm announced Westinghouse’s selection to build the Polish nuclear plant last month, she celebrated it as “a clear message to Russia” - and a project that will sustain or create more than 100,000 jobs for U.S. workers.

France largely earned its reputation as a leading nuclear energy nation amid the oil crisis in the 1970s, when most of its more than 50 reactors were built, said Alexandre Danthine, a senior associate with Aurora Energy Research.

But as the existing power plants kept producing sufficient amounts of cheap electricity, interest in constructing additional reactors faded. Technological know-how disappeared as workers retired or moved abroad, and the 2011 Fukushima nuclear accident in Japan raised questions over whether any new nuclear plants would ever be built in France.

The industry’s steady decline has only been reversed over the past years, as Macron began pushing nuclear as a way for Europe to achieve energy independence without having to increase carbon emissions.

Macron has acknowledged that the French industry has “fallen behind,” but he has defended its ability to recover, striking deals on nuclear energy cooperation in recent months with countries including India and Britain.

Macron is scheduled to attend a nuclear energy session on Wednesday, alongside four cabinet members and several executives from France’s major nuclear energy firms and its public regulator, the Élysée said last week.

A French official added Monday that one area where France anticipates possible “mutual interests” is the development of small modular reactors (SMRs).

SMRs produce less energy than traditional nuclear plants, but could be produced quicker and at greater scale.

That could help to counter some of the key criticisms of nuclear energy, which are that the construction of large nuclear power plants is expensive and can take decades, while other renewable energy sources - including wind turbines and solar panels - can be operational within months or years and are increasingly cheap.

Critics often point to France’s large pressurized water reactors, or EPRs, which are supposed to offer advances in safety and efficiency over conventional reactors while producing less waste. But the first such plant in France has repeatedly been delayed since construction began in 2007.

France is still betting on EPRs - it aims to build at least six more by 2050 - but the smaller modular reactors appear to be the most promising field of international growth.

A Franco-U. S. cooperation wouldn’t be without precedent. France’s nuclear expansion was largely possible because France struck a deal to use American technology, he said.