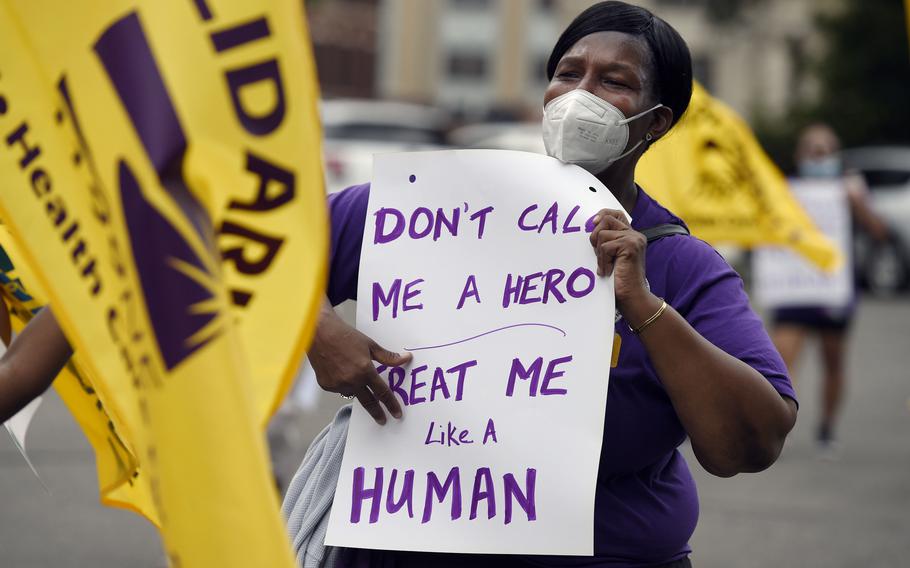 Clarissa Johnson, of Hartford, Conn., marches with long-term care members of the New England Health Care Employees Union during a rally to demand new laws to protect long-term caregivers and consumers, on July 23, 2020, in Hartford, Conn. A Connecticut program that offered “hero pay” to essential workers at the peak of the coronavirus pandemic got so many applicants that state lawmakers had to go back into session Monday, Nov. 28, 2022, to provide extra funding and put new limits on who could get the biggest bonuses. (Jessica Hill/AP)

HARTFORD, Conn. — A Connecticut program that offered "hero pay" to essential workers at the peak of of the coronavirus pandemic got so many applicants that state lawmakers had to go back into session Monday to provide extra funding and put new limits on who could get the biggest bonuses.

The Connecticut General Assembly voted to revamp the distribution formula for the Premium Pay Program for private sector workers.

Initially, the state had expected to award about $30 million in bonuses to people who had to go to work, in person, in jobs in health care, food distribution, public safety and other essential services.

But after getting 155,730 applications from eligible people, lawmakers realized they would have to either put more money in or slash benefits.

"This is the first time we've ever done a program like this in the history of Connecticut, to my knowledge. And guessing what that's going to be is hard to do," said Democratic state Rep. Sean Scanlon. "Once we became clear that we did have more oversubscription to the program than there was, we figured out a solution to it."

Half the states have collectively budgeted about $2.7 billion for extra pay to public or private-sector workers by using federal American Rescue Plan funds, according to an Associated Press analysis of the most recent data released by the U.S. Treasury Department. Connecticut's program does not rely on the federal funds.

Some states have targeted the extra pay to workers most likely to come into close contact with people, such as public health and safety employees and teachers. Others have distributed money more widely. The "essential employee premium pay program" in Massachusetts provided $500 to any individual earning between about $13,000 and $39,000 annually, or earning up to nearly $80,000 for a household of four.

Under the revamped Connecticut plan, which cleared both chambers of the General Assembly on Monday evening, funding will be boosted by $76.6 million and a new tiered system will be imposed for the program, which has stopped accepting new applications.

Meanwhile, the benefit for eligible part-time workers would drop from $500 to $200.

There's been debate among state and city officials across the country about who should receive pandemic bonuses, especially after the U.S. government allowed so-called hero pay for frontline workers as a possible use of federal pandemic relief funds.

"If you wanted to benefit the heroes, you needed to define better what a hero is," said Rep. Vincent Candelora, the Republican leader of the Connecticut House of Representatives, who criticized Connecticut's plan for being underfunded and making "no sense" as to who receives the money.

In Minnesota, checks of $487.45 were cut for qualified frontline workers this fall after the state approved more than 1 million applications. State officials had originally estimated the final pool of qualified workers would be around 667,000, with payments of about $750 apiece, but applications exceeded expectations.

Missouri had originally budgeted $24 million to give bonuses to state employees working in institutions such as prisons, mental health facilities and veterans nursing homes. The program, which expired in 2021, ended up costing nearly $100 million.

Vermont twice increased funding for its hazard pay program, which originally included health care employees who worked during the early days of the pandemic and later was expanded to include retail and grocery workers, child care providers, janitors, trash collectors and others.

If Connecticut's revamped bonus program for private sector essential workers clears the General Assembly, as expected, the issue of pandemic pay is not over. Gov. Ned Lamont has yet to reach an agreement with union leaders on how to distribute a second pot of money for state workers. An arbitrator is scheduled to meet with both sides Dec. 16.