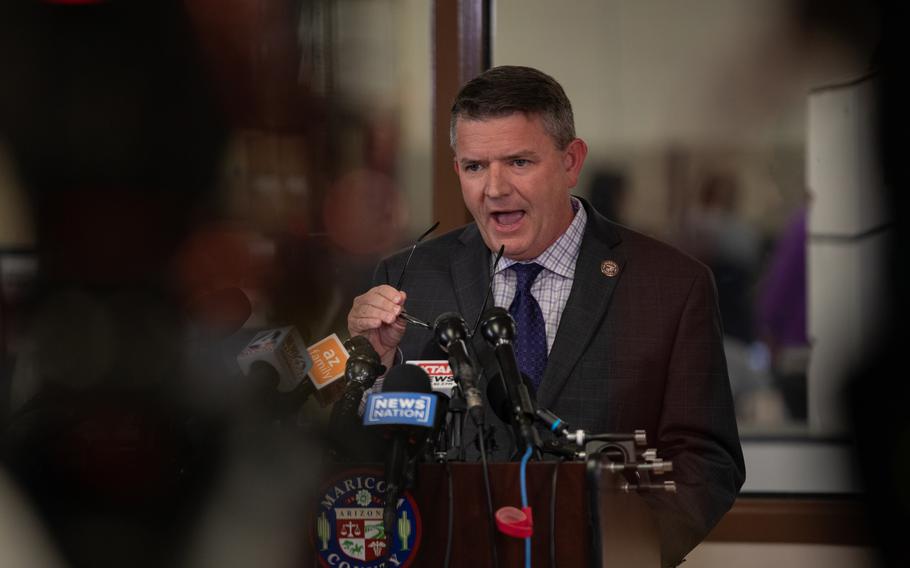 Bill Gates, chairman of the Maricopa County Board of Supervisors, on Nov. 14. (Caitlin O'Hara/The Washington Post)

PHOENIX — Maricopa County, facing a storm of GOP criticism over its handling of the Nov. 8 election, said in a report issued Sunday that problems with printers that surfaced on Election Day did not violate the Arizona Constitution or other guidelines intended to ensure free and fair elections. The county instead blamed prominent Republicans for making their own supporters suspicious of a secure alternative allowing voters who encountered mechanical issues to cast ballots.

The report comes in response to a request from the Arizona attorney general's office election integrity unit for an account of the Election Day problems before the county is set to certify its results on Monday. State certification is set for Dec. 5.

Tom Liddy, head of Maricopa County's civil division and a lifelong Republican, wrote in a five-page letter accompanying the report that "all voters were still provided reasonable, lawful options for voting." But some Republican voters might have spurned one option — a secure box known as "Door 3" — because GOP leaders, including the state party chair, told voters not to use it, according to the report.

The county's response aims to undercut claims circulated in recent weeks by Republican candidates in Arizona who have refused to accept the results of the election, in contrast to unsuccessful GOP contestants in other states. The posture of these GOP candidates has made Arizona something of a final frontier for the false claims of systematic election fraud popularized by former president Donald Trump after his 2020 loss.

Much of the in-state battle is pitting Republican officials against other Republicans who are questioning the results. The county's election board is controlled by Republicans and is led by Bill Gates, a Republican.

Kari Lake, the GOP nominee for governor who was projected nearly two weeks to lose her race to Democrat Katie Hobbs, has refused to concede, pointing to the problems in Maricopa County, home to Phoenix and more than half the state's voters. Mark Finchem, the GOP candidate for secretary of state who lost by more than 100,000 votes, has said the issues justify a "new election."

The mechanical glitches also feature prominently in a lawsuit filed last week by the GOP candidate for attorney general, Abe Hamadeh, who trailed his Democratic opponent by just 510 votes in the final tally and whose contest was headed to an automatic recount.

Hamadeh has asked an Arizona judge to order various county officials to correct procedural and tabulation errors that he claims they made. He also asserts that the final vote count will make him the winner. His Democratic opponent, Kris Mayes, over the weekend asked the judge to toss the lawsuit, which she described as a "fishing expedition to try to undermine Arizona's election."

Further afield, GOP activists have used the problems to argue that officials in Maricopa County, which was also targeted by Trump following his defeat in 2020, should be thrown out of their jobs.

The bulk of the issues arose on Election Day after printers at least 43 of Maricopa County's 223 polling sites produced ballots with ink that was too light to be read by vote-counting machines, the report states. The problems began 20 to 30 minutes after polling locations opened at 6 a.m. and went on for hours as technicians searched for a solution.

Around 11:30 a.m., about five-and-a-half hours into voting, the county issued guidance to make changes to machines that print ballots at voting locations. Settings were ultimately changed at 71 voting locations.

The faulty ink forced voters to wait in line, travel to another location or deposit their ballots in the secure so-called "Door 3" boxes that were transferred to downtown Phoenix and counted there. An Arizona judge denied an emergency request from Republicans to extend voting hours on Election Day, finding that no one was prevented from casting a ballot.

According to an analysis by The Washington Post earlier this month, the voting locations that experienced problems on Election Day in Maricopa County do not skew overwhelmingly Republican.

The county's report indicates that a "root cause analysis" of the problems remains ongoing. But the report maintains that all printers used on Nov. 8 "had updated firmware, were installed with uniform settings, and used the same settings that were used in prior elections," including during the primary in August.

The report notes that the problems affected a tiny fraction of voters, none of whom were disenfranchised because they were still able to deposit their ballots in the secure boxes, which have been used for decades. Ballots deposited in "Door 3" boxes accounted for 1 percent of total ballots issued to voters in the midterm elections, according to the county report.

Liddy writes that numerous counties in the state rely entirely on such a system, in which ballots are tabulated not at individual polling places but at a centralized site.

"It cannot be the case that the limited use of the Door 3 ballot box for some voters in Maricopa County violates the Constitution, while the required use of a ballot box by every voter in over half of the state's counties does not," he argues.

The county's report blames influential Republicans for sowing doubt about the secure boxes, which it describes as a "legal, secure, and reliable voting option."

A spokesperson for Ward did not immediately respond for comment.

Andrew Kolvet, a spokesperson for Kirk, said there was confusion on Election Day. "Instead of owning their mistakes, they're now trying to pass blame onto other people who were doing their best to bring clarity in a morning unnecessarily full of chaos and confusion," Kolvet said.

Bowyer, through a spokesperson, accused county officials of shirking responsibility for the Election Day problems. Arizona voters, he said, "should not have been forced to drop their ballots into Box 3 in large numbers."

County officials also examined the scope of ballots cast by voters who had checked into one polling location through an electronic device but then went to another location to vote — perhaps after encountering the mechanical glitches. Those who are now questioning the results have raised concerns about whether the number of check-ins matches the number of votes cast — a possible discrepancy raised in last weekend's letter from the attorney general's office.

The check-in and check-out processes were covered during poll worker training and in written guidelines provided to election workers, the county report states. All told, there were 206 voters who had checked in at one location and then voted at a second location. Of those, 84 had properly checked out of the first voting location and checked in at the second location, and were issued standard ballots.

The remaining 122 voters did not check out at their first location and were given a provisional ballot when they arrived at a second voting center.

Elections officials determined the provisional ballots should count for 109 of the 122 voters, given the printer issues traced to the first locations. Ballots for 11 voters were not counted because elections officials could not verify that a printing issue took place at the voters' first location, or there was a discrepancy between the number of voter check-ins and the number of ballots counted at the first location. Ballots for two voters were not counted because they were not properly put into envelopes and dropped into the on-site ballot box.

Monday is the deadline for the county boards to canvass the results. In her capacity as secretary of state, Hobbs has indicated her office is prepared to go to court if county governing boards do not fulfill their legal obligations on certification.

State officials, in turn, are scheduled to certify the results on Dec. 5. A spokesperson for Gov. Doug Ducey (R) told The Post last week the governor "will do his job" when it comes to certifying the results. "He certified the election results in 2020 and he has every intention of doing so this year," the spokesperson said.

Representatives for Republican Attorney General Mark Brnovich, who demanded the Maricopa County response, did not respond to The Post's inquiry last week about how he intends to approach his role as a witness in certifying the results.