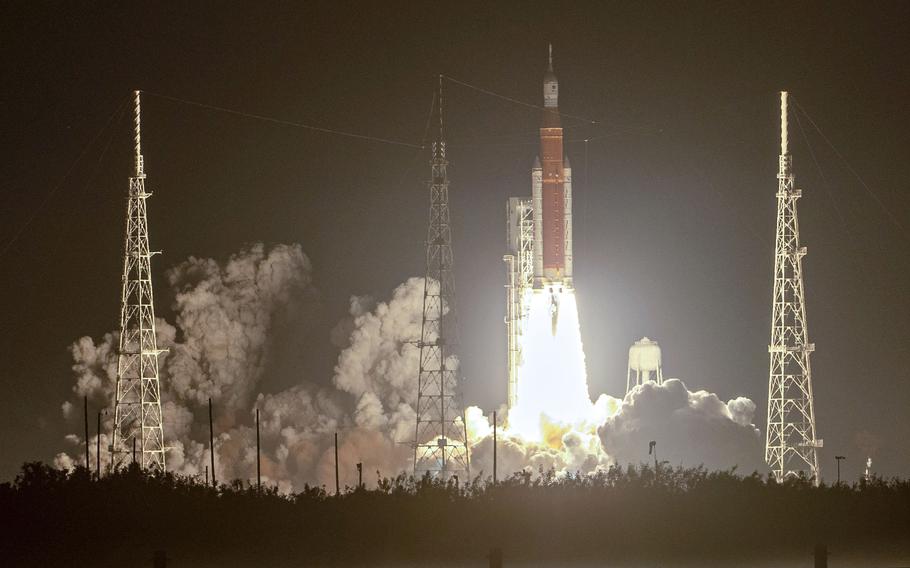 Artemis I, NASA's Space Launch System (SLS) rocket with the unmanned Orion spacecraft aboard, blasts off from Launch Pad 39B at Kennedy Space Center on Nov. 16, 2022. (Jonathan Newton/The Washington Post)

Ten days after launching from the Kennedy Space Center, NASA’s Orion spacecraft on Friday entered a distant orbit around the moon, completing yet another key milestone in a mission that space agency officials say has gone exceedingly well so far.

Orion’s thrusters fired at 4:52 p.m. Eastern time for a minute and a half, putting the craft into an orbit some 40,000 to 50,000 miles above the lunar surface. That orbit will place Orion on a path to break the record for the farthest distance from Earth traveled by “a spacecraft designed to carry humans to deep space and safely return to Earth.” The current record of 248,655 miles was set by Apollo 13 in 1970, NASA said in a statement.

The distant orbit, which requires little fuel to maintain, will allow Orion to test its systems to see how the vehicle performs. The orbit is so vast, however, that the craft will complete only about half an orbit in six days before it begins its return flight to Earth.

The flight, without any astronauts on board, is the first step in NASA’s Artemis program, which seeks to return astronauts to the lunar surface for the first time since the Apollo missions of the late 1960s and early ‘70s.

Using cameras mounted on the outside of the spacecraft, Orion has been beaming back dramatic images and live video from its journey. including spectacular images of Earth, seen hanging in the distance, more than 200,000 miles away, in the vast, inky darkness of space.

“The mission continues to proceed as we had planned, and the ground systems, our operations teams and the Orion spacecraft continue to exceed expectations,” Mike Sarafin, NASA’s Artemis I mission manager said earlier this week. “And we continue to learn along the way about this new deep spacecraft.”

He said the Space Launch System rocket, even more powerful than the Apollo-era Saturn V, performed so well that the results were “eye-watering.” Its massive thrust, however, caused some damage to its mobile launch tower, including blowing the doors off the tower’s elevator. But, on the whole, “the structure itself held up well,” Sarafin said.

One of the main tests will come as the spacecraft re-renters Earth’s atmosphere, traveling at about 25,000 m.p.h. The friction with the thickening air will produce temperatures as high as 5,000 degrees Fahrenheit.

The spacecraft is expected to splashdown in the Pacific Ocean off the coast of San Diego on Dec. 11.

While there are no real-life astronauts on board the Artemis I mission, there is a mannequin, named “Moonikin Campos,” that is riding in the commander’s seat of the Orion spacecraft. It’s outfitted with a suit and sensors to provide feedback on what the ride will be like for future astronauts.

The name “Moonikin” was chosen through a public contest. Campos was chosen in honor of Arturo Campos, a former NASA engineer who played a key role during the recovery of the Apollo 13 spacecraft after the mission went awry.

Two mannequin torsos are also riding along. Named Zohar and Helga, they are made from materials that NASA says “mimic human bones, soft tissues and organs of an adult female.” (Women are believed to be more sensitive to radiation exposure than men.)

They have sensors to measure radiation, as well. Zohar has a radiation vest, but Helga doesn’t.