Two runners had cardiac arrests. A cardiologist was racing behind them. 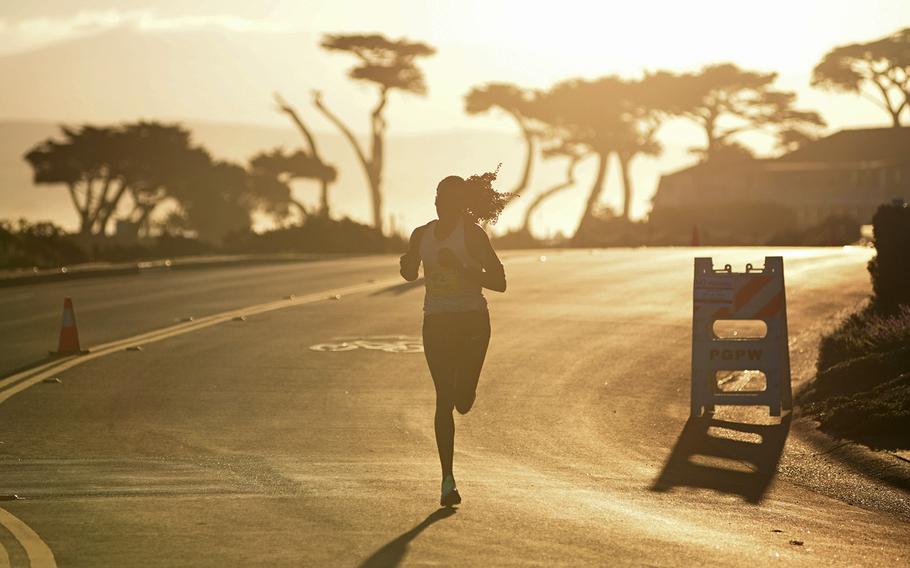 Joyline Chemutai runs in the Monterey Bay Half Marathon in California. During the marathon, two runners, men in their 50s and 60s, collapsed on the course. (Andrew Tronick/Big Sur Marathon Foundation)

Steven Lome, a cardiologist and distance runner, had never witnessed anybody experience a cardiac arrest during a road race. Nor did he expect to use his professional skills outside work.

But while running the Monterey Bay Half Marathon in California on Nov. 13, Lome saw not one, but two runners collapse on the course, and he performed cardiopulmonary resuscitation (CPR) on both. The two runners, men in their 50s and 60s, survived and are expected to make full recoveries, Lome recounted in a Twitter thread.

"I just thought it was such a crazy, crazy odds, random event that there were two cardiac arrests, and both happened to be right in front of me," he said in a phone interview.

The incidents, which have received national attention, offer lessons and reminders for runners of all abilities. While sudden cardiac arrests are uncommon among road race participants - according to a 2012 study published in the New England Journal of Medicine, the incidence rate is .54 per 100,000 participants, with the rate significantly higher during marathons compared with half marathons. The majority of those cases of cardiac arrest (71 percent) were fatal. There were about 5,000 finishers at the Monterey Bay Half Marathon.

Cardiologists also emphasize the importance of listening to your body and understanding risk factors and potential warning signs. Both the runners have a family history of heart disease. The fact that both survived can partially be attributed to the quick action of passersby who performed CPR and the availability of automated external defibrillators (AEDs).

"It was actually an amazing response," Lome said. "It was quite a team effort."

• Get certified in CPR and AED

When Lome saw the first runner, 67-year-old Greg Gonzales of Vancouver, Wash., collapse about 30 feet in front of him around the third mile of the race, he assessed that it "wasn't just a simple fainting spell or trip."

Lome started chest compressions "within a minute" of Gonzales collapsing and said someone had called 911. He added that within a few minutes, paramedics arrived with a defibrillator. The American Heart Association recommends hands-only CPR, which instructs the person giving chest compressions to push hard and fast in the center of the patient's chest. Push to the beat of the song "Stayin' Alive" by the Bee Gees, Lome said. "That's because that's the proper beat."

Gonzales woke up two or three minutes after being shocked by the AED, Lome said.

Gonzales said in a phone interview that the last thing he remembered about the race was speeding up an incline around the third mile. When he regained consciousness, he was in the back of an ambulance.

"I felt good, other than terrific chest pain, and they indicated the chest pain was from rib fractures due to the chest compressions," Gonzales said.

Lome continued with his race after helping Gonzales and finished the half marathon in 2 hours 30 minutes 32 seconds. Then he saw the second runner, 56-year-old Michael Heilemann of San Anselmo, Calif., collapse right past the finish line. Lome started chest compressions. A race volunteer brought an AED "within one to two minutes," he said.

Heilemann woke up after one shock, Lome said.

"The finish line is a relatively common area for cardiac events," said John Ellison, the medical director for the Monterey Bay Half Marathon and the Big Sur International Marathon.

Ellison credited the people around for saving the lives of the runners. "The ultimate treatment for cardiac arrest isn't CPR, it's defibrillation, it's getting electricity in the chest to restart the heart," he said. "And the CPR is important to preserve brain function and keep that blood flowing in the meantime."

Both Gonzales and Heilemann are runners with family histories of heart attacks or heart disease.

Heilemann said his father, who died three years ago from heart disease, experienced a cardiac arrest when he was 56. His uncle and cousin also died of heart disease.

Both men said they felt healthy heading into the race. But a healthy lifestyle "does not make you immune from your risk factors," sports cardiologist Jonathan Kim said.

• Listen to your body

He overlooked the pain and wrote it off to other things such as indigestion or soreness from lifting weights. Gonzales said that looking back, he should have gone to the doctor.

These signs should not be ignored. "Even though you're running like me, trying to work out like me, if there's any issues like that, get a hold of your internist or your doctor right away," Gonzales said.

Studies have shown that exercise can reduce the risk for heart disease, but it's important that you talk with your doctor before participating in an endurance event, particularly if you have risk factors.

"A lot of people run marathons and do just fine," Kim said. "But if you've never done it before, you want to kind of think about what your risk factors may be, and ensure all of that has been addressed and controlled for."

• Don't train when you have a respiratory illness

While Lome's tweet about the two runners with cardiac arrest prompted speculation on social media that the incidents might be related to covid, experts said there's no evidence to support that.

Kim, who is the director of sports cardiology at Emory University, says the fact that there were two runners who experienced cardiac arrest during the same race is "probably more of a coincidence" as opposed to an indication that there has been an increase in cardiac events because of the pandemic.

"We have not personally observed an uptick in cases of myocarditis, or cases of sudden cardiac arrest in athletes as a consequence of covid," he said.

He did advise against training when you have a respiratory viral infection.

"Respect the virus, whether it's covid or you just have a bad cold or the flu, you should not train through a viral syndrome," Kim said. "That's something we preached in my field before covid, and certainly we continue to preach post-covid."

Heilemann said he has not tested positive for the coronavirus, and Gonzales said he tested positive in January and had fatigue symptoms until July but had been able to train normally since then.

"I believe this half marathon was the hardest I've ever trained for a half marathon," Gonzales said. "I felt great."

Both runners said they plan to race and finish the Monterey Bay Half Marathon next year.