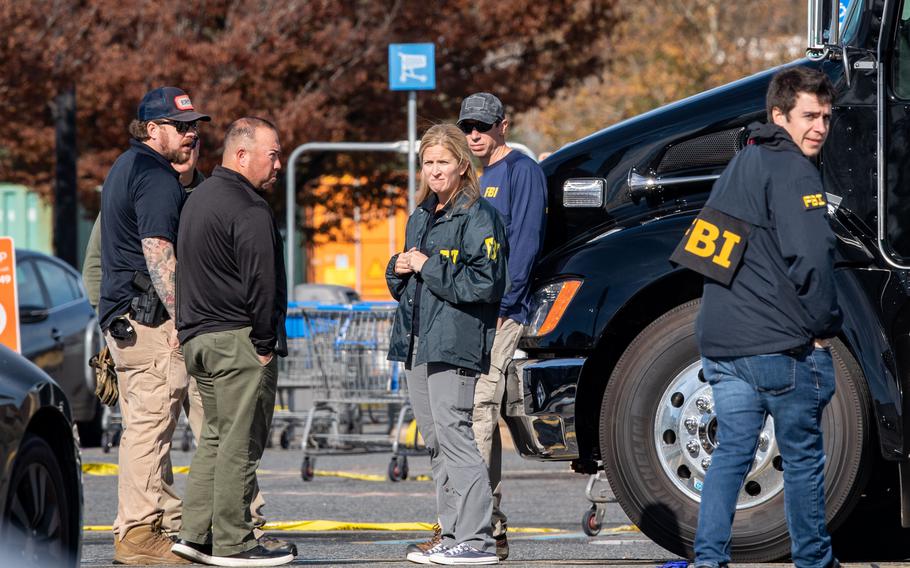 Members of the FBI gather in the parking lot of the Walmart in Chesapeake, Va., on Thursday. (Mike Caudill/The Washington Post)

CHESAPEAKE, Va. — Police here said they spent Thanksgiving Day examining why a Walmart supervisor shot and killed six co-workers — focusing at least in part on an alleged “manifesto” he wrote — as families, friends and co-workers of the victims grieved on what should have been a joyous holiday.

A somewhat clearer picture began to emerge of the gunman — identified by authorities as 31-year-old Andre M. Bing — though neither police nor those who knew him could provide definite answers as to what motivated the Tuesday night rampage. Chesapeake Police Department spokesperson Leo Kosinski said investigators were “actively investigating the allegation that the suspect wrote a manifesto,” first reported by WAVY-TV 10 in Portsmouth, Va., though he provided no details.

One former colleague said Bing, an overnight supervisor who joined the company in 2010, confided in her he had “anger issues.” Another said he was “overly aggressive” and seemed to have little social life outside of work. A mother of one of the victims claimed Bing seemed to have it out for her son — even attempting to fire him this year. But others described Bing as friendly and said they never imagined he would carry out such an attack, which police say ended when Bing took his own life.

“We are actively looking into a motive right now and we want to make sure we get it right before we release it,” Kosinski said.

Relatives of the dead were facing empty seats at their holiday meals, and the nation was left to process yet another episode of high-profile gun violence. The shooting came days after a man was accused of fatally shooting five people at a Colorado LGBTQ nightclub and less than two weeks after a 22-year-old University of Virginia student was accused of killing three student-athletes returning from a school trip. According to the Gun Violence Archive, there have been at least four mass shootings every week in 2022. The group defines a mass shooting as an episode where four or more people, not including the assailant, are injured or killed.

Virginia Gov. Glenn Youngkin (R) referenced the two recent attacks in his state in a Thanksgiving tweet, writing, “On this day that we offer thanks for our many blessings, [wife] Suzanne and I ask all Virginians to take a moment to lift up in prayer the families of the victims in Chesapeake and Charlottesville, along with the many heroes who serve and protect.”

Brian Pendleton, 39, one of the six employees killed, was supposed to work at Walmart on Thursday after Thanksgiving dinner, said Michelle Johnson, his mother. “I am in the kitchen now, trying to do Thanksgiving for everybody as best I can,” Johnson said Thursday morning. “But it is such a different day.”

Johnson said her son, who had a brain condition called congenital hydrocephalus, had worked at Walmart for more than 10 years. This year, she said her son told her that Bing tried to have him fired — leaving Pendleton confused, because of his longtime service to the company. Johnson told her son to contact Bing’s supervisor and ask for his job back.

“When he did that, they reinstated Brian,” she said. “I just don’t understand how this all slipped through the cracks. It was so evident that this man had something — I feel like he had something against my son.”

The Washington Post could not immediately corroborate that account, and it was not clear whether Bing had the authority to fire someone. Walmart did not respond to a request for comment on whether Bing had attempted to have Pendleton fired.

Johnson said that her son “loved his job,” but she now wondered whether more could have been done to protect him. “He did have some issues with [Bing] at one point, but we thought everything was resolved,” she said.

Bing, who had no apparent criminal record, entered the store Tuesday night armed with a handgun and several magazines and opened fire, authorities said. He targeted co-workers in a break room, according to police and witness accounts.

Friends and relatives remembered the victims as caring, hardworking people. In addition to Pendleton, there was Tyneka Johnson, 22, a fashionista who dreamed of attending college. There was Randall Blevins, 70, who skipped retirement to keep working and enjoyed wrestling and hockey. There was Kellie Pyle, 52, who had just moved back to her hometown and reconnected with her high school sweetheart. There was Lorenzo Gamble, 43, whose mother had put him in charge of both the banana pudding cake and banana pudding for his family’s Thanksgiving dinner.

Another victim, a 16-year-old employee, has not been identified because he is a minor.

Nathan Sinclair, a former Walmart employee who worked the second shift, said Bing had a less-than-stellar reputation among colleagues. “He was known in the store for being hostile at times,” Sinclair, 21, said in a phone interview. “He talked to you like he ran the store. . . . There’s always people in jobs that aren’t liked — Andre was one of them.”

Sinclair, who worked at the Walmart from January until the first week of November and lives in Chesapeake, said he sometimes had to interact with Bing near the end of his shift, but he tried to avoid chatting with the man as much as he could.

“He had too many moments where he’d be overly aggressive,” Sinclair said.

Sinclair said he was told Bing had been written up at least twice by Walmart supervisors, though he did not know the details and The Post could not immediately verify the information. Walmart did not immediately respond to a question about Bing having been disciplined previously.

At work, Bing was either focused on getting his job done or playing games on his phone, Sinclair said. Although he was not fond of Bing, Sinclair described him as a “hard worker.” Other associates sometimes made fun of Bing’s clothes or hair, Sinclair said.

“Andre was kind of picked on a little bit by some associates at the store,” Sinclair said. “There were definitely other employees that made fun of him.”

Sinclair said Bing shared that he lived by himself and would often play video games when he was not working. “He didn’t have a social life,” Sinclair said. “It was work, home. Home, work. It didn’t seem like he had much of a support system, if any.”

Janice Strausburg said she worked at different Walmarts for about 13 years before quitting this year to become a Lyft driver. She said she worked with Bing for about five years at the store where the shooting occurred.

Strausburg said she and Bing talked often, but they drifted apart after he gossiped about her to co-workers. She said she couldn’t recall the nature of his comments.

Bing was “grumpy but sometimes pleasant,” Strausburg said, and he once confided to her that he had anger issues.

“I think it was because of demons,” she said of the Tuesday night attack. “Mental issues.”

Michelle Henry, who worked at the Walmart between 2016 and 2018, said she knew Bing when he was still an associate. She described him as a hard worker whom people got along with. “Andre was just a normal everyday guy. I’ve laughed with him many times,” she said. “I can’t believe he did this.”

She said she never heard Bing talk about family, but he did talk about friends outside of work.

“The only explanation I can think of is bad mental health,” Henry said. “Those were good people he killed. They didn’t do anything bad to anyone.”

Efforts by The Post to locate relatives of Bing have been unsuccessful.

The aftermath of the shootings cast a pall over Chesapeake, a city of about 250,000 people in the southeastern corner of Virginia.

Zachary Adkins, 32, and his girlfriend sat in his car feet away from the police tape lining the Walmart parking lot. They had been driving around and decided to stop and pay their respects.

“We just thought it was the right thing to do, “ he said. “It’s sad so close to the holiday. We’re having a big family dinner. These people don’t get to go to that.”

Matt Cilento, who worked as a police officer in Chesapeake from 2000 to 2007 and now operates a towing business, said that after the shooting, a few of his employees wanted to do something to honor the victims. They decided to build crosses, which they delivered on Thursday to the Walmart parking lot, next to the many flowers placed there by mourners.

The Washington Post’s Laura Vozzella contributed to this report.