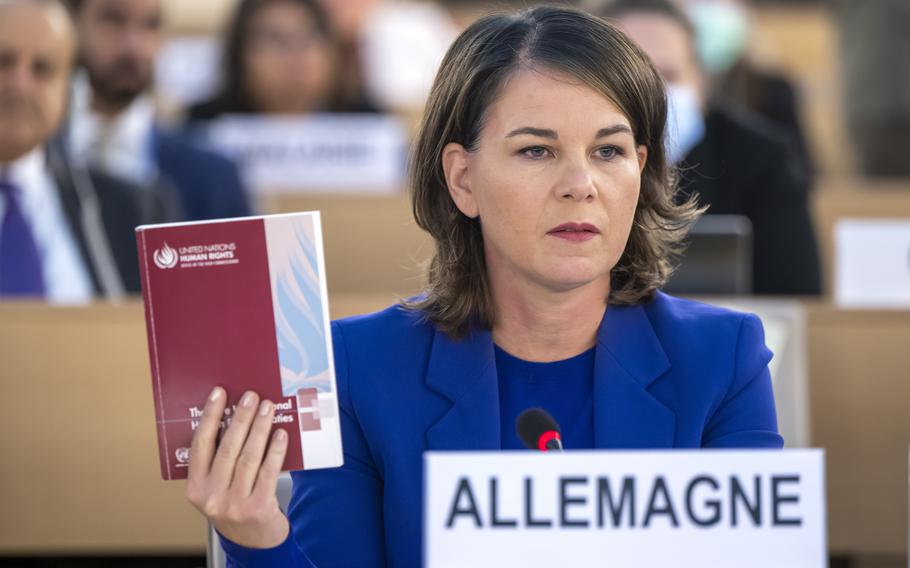 BERLIN — The U.N. Human Rights Council voted Thursday to condemn the bloody crackdown on peaceful protests in Iran and create an independent fact-finding mission to investigate alleged abuses, particularly those committed against women and children.

A resolution put forward by Germany and Iceland was backed by 25 countries, including the United States and many European, Latin American, Asian and African nations. Six countries opposed the move — China, Pakistan, Cuba, Eritrea, Venezuela and Armenia — while 16 abstained.

The United Nations' top human rights official had earlier appealed to Iran's government to halt the crackdown against protesters, but Tehran's envoy at a special Human Rights Council on the country's "deteriorating" rights situation was defiant and unbowed, blasting the initiative as "politically motivated."

The protests were triggered by the death, more than two months ago, of 22-year-old Mahsa Amini while in the custody of the morality police for violating a strictly enforced Islamic dress code.

Thursday's session in Geneva is the latest international effort to put pressure on Iran over its crackdown, which has already drawn international sanctions and other measures.

German Foreign Minister Annalena Baerbock, who was on hand, said the situation presented "a test of our courage."

"The United Nations were founded to protect the sovereignty of every state, but a regime that uses this power to violate the rights of its own people is violating the values of our United Nations," she said.

"On many occasions, we have called upon Iran to respect these rights to stop the violent crackdown on protesters, the bloodshed, the arbitrary killing, the mass arrests, the death penalties," Baerbock said. "The only answer we received was more violence, more death."

Khadijeh Karimi, deputy of Iran's vice president for Women and Family Affairs, criticized the Western effort as part of a "politically motivated move of Germany to distort the situation of human rights in Iran."

"The Islamic Republic of Iran deeply regrets that the Human Rights Council is abused once again by some arrogant states to antagonize a sovereign U.N. member state that is fully committed to its obligation to promote and protect the human rights," Karimi said.

She trumpeted her government's efforts to foster the role of women in the workplace and higher education and accused Western countries of turning a blind eye to rights abuses in places like Yemen, Palestinian areas, or against indigenous peoples in Canada — which the Canadian government has acknowledged.

Karimi acknowledged the "unfortunate decease" of Amini and said "necessary measures" were taken afterward, including a creation of a parliamentary investigative commission. She accused Western countries of stoking riots and violence by intervening in Iran's internal affairs.

The U.N. human rights chief, Volker Türk, expressed concerns that Iran's government has not been listening to the world community.

"The people of Iran, from all walks of life across ethnicities, across ages, are demanding change. These protests are rooted in long standing denials of freedoms, in legal and structural inequalities, in lack of access to information and Internet shutdowns," he said.

"I call on the authorities immediately to stop using violence and harassment against peaceful protesters and to release all those arrested for peacefully protesting, as well as crucially, to impose a moratorium on the death penalty," he added.

The proposal by Germany and Iceland aimed to ratchet up scrutiny that for years as been carried out by the 47-member-state council's "special rapporteur" on Iran, whose efforts have been shunned by the Islamic Republic's leaders. Western diplomats say Tehran has led a quiet push in Geneva and beyond to try to avoid any further scrutiny through the new council resolution being considered on Thursday.

The council will now set up a "fact-finding mission" to investigate rights violations "especially with respect to women and children" linked to the protests that erupted on Sept. 16. It also demands that Tehran cooperate with the special rapporteur, such as by granting access to areas inside Iranian territory, including places of detention.

The team would be expected to report back to the council in mid-2023.

Several Western diplomats expressed anger at China's last-minute attempt to nix the planned probe from the resolution. Beijing's representatives had said the fact-finding mission "obviously would not help solve the problem" and "may will further complicate the domestic situation in Iran."

But that effort was ultimately defeated, with just five other nations backing China's proposed amendment.

The U.S. envoy to the Geneva-based council, Ambassador Michèle Taylor, said it was important to pass the resolution creating a fact-finding mission "because of Iran's demonstrated unwillingness to investigate numerous credible allegations of human rights abuses by members of its security forces and other officials."

Taylor said she was "personally appalled" by China's attempt to sink the proposal.

"Some who have defended the Iranian authorities have sought to cast this merely as a cultural issue," she said. "Let us be clear: no culture tolerates the killing of women and children."

Amini remains a potent symbol in protests that have posed one of the most serious challenges to the Islamic Republic since the 2009 Green Movement protests drew millions to the streets.

Activists said Iranian security forces on Monday used heavy gunfire against demonstrators in a western Kurdish town, killing at least five during an anti-government protest at the funeral of two people killed the day before.