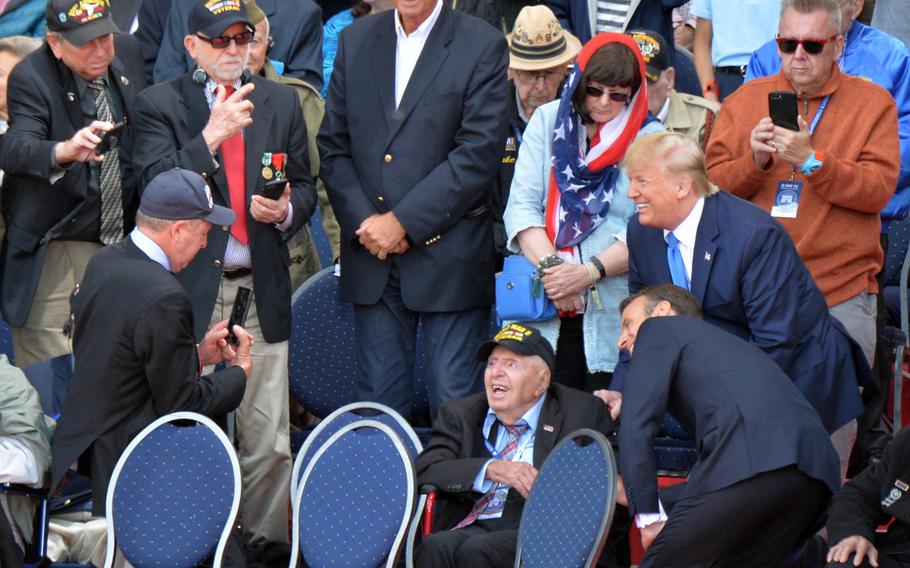 Presidents Donald Trump of the U.S. and Frances Emmanuel Macron pose with a World War II veteran during the 75th anniversary of D-Day ceremony at Normandy American Cemetery in Colleville-sur-Mer, France, June 6, 2019. (Michael Abrams/Stars and Stripes)

The court’s order means that the Treasury Department may quickly hand over six years of tax records from Trump and some of his companies to the House Ways and Means Committee.

There were no recorded dissents in the court’s order.

Lawmakers have said they need Trump’s tax returns from his time in office to help evaluate the effectiveness of annual presidential audits. Trump has argued that Democratic lawmakers are on a fishing expedition designed to embarrass him politically.

Time is not on the side of Democrats who run the committee. The demands for the records will almost surely expire in January, when Republicans take control of the House as a result of the recent midterm elections.

“Delaying Treasury from providing the requested tax information would leave the Committee and Congress as a whole little or no time to complete their legislative work during this Congress, which is quickly approaching its end,” House general counsel Douglas N. Letter said in a filing to the court.

Trump’s lawyers said that was all the more reason to grant the request to block the release of the records. “The Congress has only a few days left on its legislative calendar,” lawyer Cameron T. Norris said in his filing. “Though a few days is enough time to improperly expose the most sensitive documents of its chief political rival, it’s not enough time to properly study, draft, debate, or pass legislation.”

Last month, the full U.S. Court of Appeals for the D.C. Circuit declined to review earlier rulings finding that lawmakers are entitled to the documents in the long-running legal battle. That court also refused to put the release of the papers on hold while Trump’s lawyers sought Supreme Court review.

The Supreme Court generally has been unreceptive to assertions from Trump - who is again running for president - that he should be allowed to keep records private and that he was immune to investigation while in office. The justices in 2020 upheld Congress’s right to subpoena that information as long as certain conditions were met, and last year they declined to block the release of Trump’s financial records to New York state investigators.

In arguing against the release of the records, Trump’s legal team strongly questioned the committee’s premise for seeking the information.

“The Committee’s purpose in requesting President Trump’s tax returns has nothing to do with funding or staffing issues at the IRS and everything to do with releasing the President’s tax information to the public,” Trump’s filing to the Supreme Court states.

It adds: “If allowed to stand, it will undermine the separation of powers and render the office of the Presidency vulnerable to invasive information demands from political opponents in the legislative branch. Review is of the utmost importance, and the Court should preserve its ability to grant it - not just for one ‘particular President,’ but also for ‘the Presidency itself.’”

The references to a ‘particular President’ and ‘the Presidency itself’ are from a previous Supreme Court ruling involving Trump.

But this litigation is unique because Trump defied modern tradition for presidential candidates and occupants of the Oval Office by refusing to make his tax returns public. Democrats began the legal battle to get them after taking over the House in 2019.

Solicitor General Elizabeth B. Prelogar, representing the Biden administration, told the Supreme Court that even if there were political elements to the congressional committee’s request, the judicial branch should not get involved.

“Throughout our Nation’s history, congressional requests for information have been driven by mixed legislative and political motives,” she told the court in a filing. “But time and again, this Court has rejected attempts to invalidate otherwise appropriate legislative requests based on evidence of additional motives.”

She said lower courts evaluated the committee’s request in line with the standards set by the Supreme Court in Trump v. Mazars, the 2020 decision that sided with Congress in Trump’s attempt to block release of his records.

“This Court’s longstanding precedent forecloses applicants’ attempt to have the courts look behind the request’s stated legislative purpose to the subjective motives of individual legislators,” she wrote. “Under the particular circumstances of this case, the Chairman’s request for applicants’ tax information is both within the Committee’s authority and consistent with the separation of powers.”

She said the judges in the lower courts took different approaches in finding there was no separation of powers violation in the committee’s request, “but all of them reached the same conclusion - and none of them regarded the case as particularly close.”

Although the case has taken years to move through the courts, those judges have consistently ruled that lawmakers established the “valid legislative purpose” required for disclosure.

The appellate court said Trump’s status as a former president figured into its decision; since all previous presidents going back decades had voluntarily released their tax returns, the request was “minimally intrusive.” But even if Trump were still president, the court found that the request would not violate the separation of powers. The court also was unmoved by Trump’s argument that his tax returns might become public.

“Congressional investigations sometimes expose the private information of the entities, organizations, and individuals that they investigate,” the panel wrote. “This does not make them overly burdensome. It is the nature of the investigative and legislative processes.”

It also dismissed concerns that allowing the request would inflame tensions between Congress and the president - or a former president.

“While it is possible that Congress may attempt to threaten the sitting President with an invasive request after leaving office, every President takes office knowing that he will be subject to the same laws as all other citizens upon leaving office,” the court’s order said. “This is a feature of our democratic republic, not a bug.”

The case is Trump v. Committee on Ways and Means.