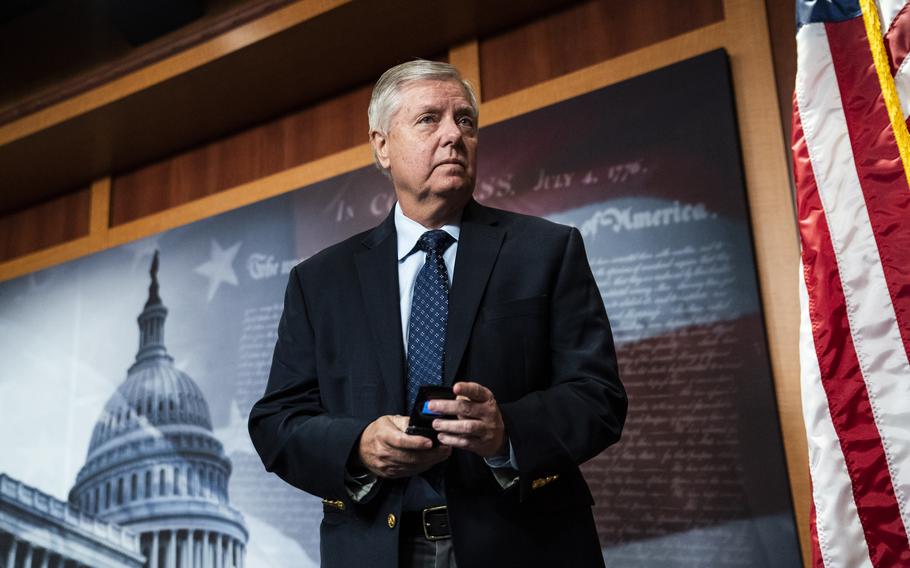 Sen. Lindsey O. Graham (R-S.C.) on Capitol Hill on Dec. 10, 2021. After unsuccessfully challenging a subpoena, he has testified before a grand jury in Georgia that is examining possible interference with the result of the 2020 presidential election in the state. (Jabin Botsford/Washington Post)

ATLANTA — After months of failed legal challenges, Sen. Lindsey O. Graham (R-S.C.) appeared Tuesday before a special grand jury investigating efforts by former president Donald Trump and his allies to overturn Trump’s 2020 election loss in Georgia, the latest high-profile witness in a probe that is believed to be nearing a conclusion.

A sheriff said that Graham entered the courthouse around 8 a.m.

Graham’s testimony follows an extended legal challenge to block his appearance that went all the way to the U.S. Supreme Court, which this month declined to overturn lower court rulings requiring him to appear.

The South Carolina Republican and Trump confidant was first subpoenaed in July by the Fulton County district attorney’s office, which sought to question Graham about phone calls he made to Brad Raffensperger, the Georgia secretary of state, in the weeks after the 2020 election, and other issues related to the election.

Trump personally urged Raffensperger to “find” enough votes to overturn his defeat in the state, where Biden claimed victory by fewer than 12,000 votes. Trump has insisted that the election there was marred by fraud, although multiple legal inquiries have found no evidence of that.

Raffensperger later told The Washington Post he felt pressured by other Republicans, including Graham, who he said echoed Trump’s claims about voting irregularities in the state. He claimed that Graham, on one call, appeared to be asking him to find a way to set aside legally cast ballots.

Graham and his attorneys have strongly rejected that characterization, describing the senator’s interactions with Raffensperger as “investigatory phone calls” that were meant to inform his decision-making on whether to vote to certify the election for Biden and to inform other Senate work.

In court filings, Graham has claimed that his actions were legitimate legislative activity protected by the Constitution’s “speech or debate clause” and that he should not be required to answer questions from a grand jury.

In September, U.S. District Judge Leigh Martin May ruled that Fulton County prosecutors could not question Graham about portions of his calls that were legislative fact-finding.

But May cleared the way for prosecutors to question Graham about his coordination with the Trump campaign on post-election efforts in Georgia. The judge also said Graham also could be asked about his public statements about the 2020 election and “any alleged efforts to ‘cajole’ or encourage” Georgia election officials “to throw out ballots or otherwise alter Georgia’s election practices and procedures.”

A three-judge panel of the U.S. Court of Appeals for the 11th Circuit later upheld that lower court ruling. The Supreme Court rejected a final appeal by Graham this month, paving the way for his appearance this week. Graham’s attorneys have said he has been told he is a witness, not a target, in the Fulton County investigation.

Graham’s testimony came as the grand jury appears to be nearing a conclusion in its work. Jurors have heard testimony from several Trump lawyers, including Rudy Giuliani, John Eastman and Boris Epshteyn. Georgia Gov. Brian Kemp (R), who also unsuccessfully sought to quash a subpoena in the case, appeared before the panel last week.

The 23-person grand jury is authorized to meet until May 2023. But Willis said earlier this year that she hoped the panel would wrap up its work by the end of this year. The panel does not have the power to issue indictments, but would make its recommendations in a report to Willis, who would then weigh potential charges.

During a court hearing in Florida last week where Flynn was challenging his subpoena, Assistant Fulton County District Attorney Will Wooten told a judge there are “very few” witnesses remaining.

“The likelihood is that this grand jury is not going to be hearing testimony much longer,” Wooten said, according to CNN.

Bailey reported from New Orleans and Brown from Atlanta. The Washington Post’s Ann E. Marimow and Tom Hamburger contributed to this report.