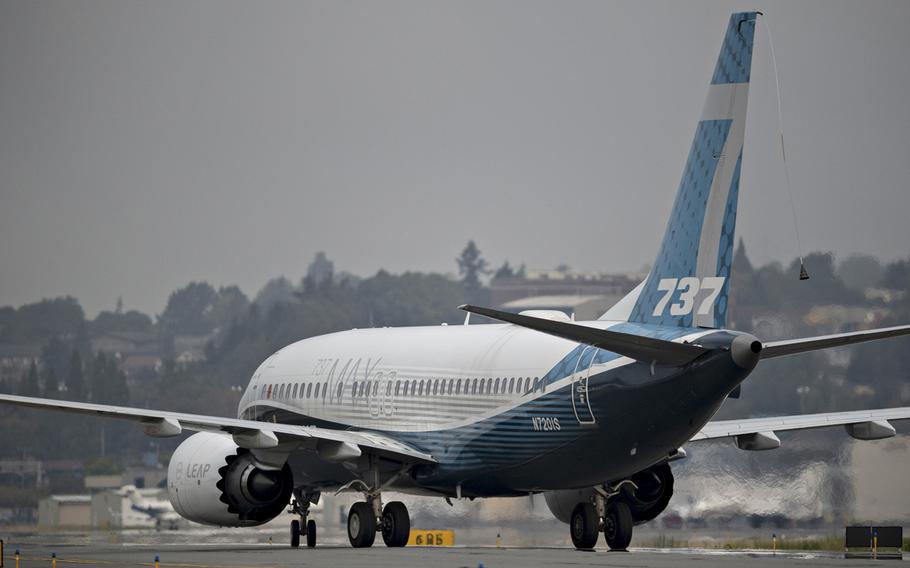 A Boeing 737 Max taxis after landing during a test flight in Seattle on Sept. 30, 2020. (Chona Kasinge/Bloomberg )

But the emotional in-person and virtual meeting, which lasted five hours and included more than 100 family members around the world, only served to underscore how far apart the two sides remain on the central demand made by families earlier this year in a Texas court: The Justice Department should throw out its deal not to prosecute Boeing if the company meets certain conditions.

After a sometimes-tearful recounting of the devastation caused by crashes in Indonesia in 2018 and Ethiopia in 2019, representatives of the families voiced frustration that the meeting had been, according to Naoise Connolly Ryan, "a complete disappointment."

Ryan, whose husband, Mick, was killed on the Ethiopian Airlines flight, said in a statement the Justice Department was "inflicting new wounds" by sticking with its "sweetheart agreement that provided immunity to the company responsible for our loved ones' deaths."

During the session, the Justice Department reiterated arguments it made in federal court, including that throwing out key elements of the deal would create uncertainty over similar agreements in the future - ultimately undercutting government efforts to hold defendants accountable. The department has also said it would confer with families on its evaluation of Boeing's compliance with the agreement.

A department spokesman declined to characterize the meeting, but in a statement said it "will continue to learn from this and other cases to ensure that victims remain at the forefront of our work." It cited revised guidelines that require going "above and beyond what the law requires with respect to engagement with victims and others significantly harmed by crime."

Boeing admitted to conspiring to defraud federal regulators as part of a deferred prosecution agreement signed in the final days of the Trump administration. The Justice Department, in turn, agreed not to prosecute the company for that conspiracy if it meets the terms of the deal, including making payments to families, Boeing's customers and the government, as well as strengthening the company's compliance with fraud laws.

U.S. District Judge Reed O'Connor ruled last month that the 346 people killed in the two crashes have rights as crime victims under federal law, which include a "reasonable right to confer" with the government in the case. That did not happen before the Boeing deal was reached. O'Connor is deciding the consequences for that violation.

The Justice Department has argued its agreement with Boeing should not be undone, citing safety and other concerns.

"The Government would lose its leverage to ensure that Boeing follows through with the regulatory, compliance, and other reforms that are critical to preventing future violations that could endanger public safety," the Justice Department argued in a Nov. 11 court filing.

In response, Michael Stumo, whose daughter Samya Rose Stumo was killed in the Ethiopia crash, said, "They get leverage for safety by putting people responsible in jail." He said the families had pointed questions, including, "Why are you wasting our time if we can't make a difference in the prosecution of Boeing?"

The Justice Department noted in its filing the agreement "is now two-thirds of the way through its life span, and most of the obligations it imposes on Boeing are now fully or substantially met." The department declined to describe the resources it devoted to ensuring Boeing's compliance.

Boeing, meanwhile, said in a filing it has "honored its obligations under the agreement scrupulously for nearly two years, including making all required payments" and complying with its reporting obligations. The company said is not responsible for the Justice Department's approach to victims.

Boeing said it has made changes to enhance quality and safety. Despite the families' "unspeakable losses," the company added, they are not entitled to overturn the agreement.

"Boeing was and is entitled to rely on that contract," the company said.