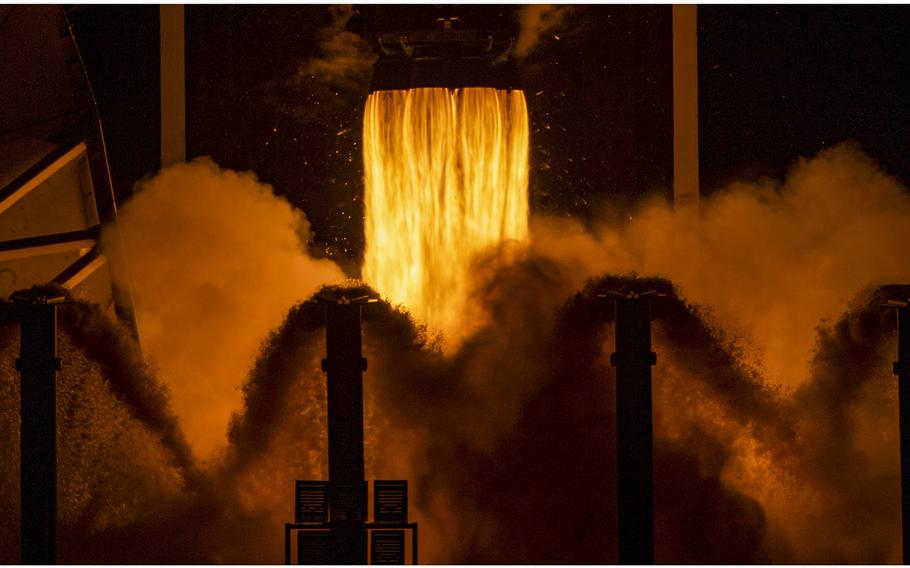 The SpaceX launch of the Inspiration4 crew from the Kennedy Space Center in Florida on Sept. 15, 2021. (Jonathan Newton/Washington Post)

When SpaceX launched 49 Starlink communications satellites into low orbit in February, the goal was to connect remote locations on Earth to the internet. But a space storm dashed those plans, causing 38 of the satellites to fail and costing the commercial space company millions.

In a study published in the journal Space Weather, researchers from the National Oceanic and Atmospheric Administration's Space Weather Prediction Center and SpaceX explain how weather on the sun made such a big impact 93 million miles away.

Space weather affects Earth thanks to the magnetic field that forms a shield between Earth and space. That magnetosphere is regularly buffeted by winds, flares, mass ejections and particles emitted by the sun, causing disturbances known as geomagnetic storms. These storms are responsible for phenomena such as the Aurora Borealis, or Northern Lights. They can also wreak havoc on GPS systems, power transmissions and satellite communications.

Although the February storm was relatively minor, it caused a disturbance in Earth's upper atmosphere that produced significant drag and made it impossible for the satellites to begin their orbit-raising maneuvers, the researchers write. Instead of reaching orbit, the satellites fell toward Earth, burning up as they reentered its atmosphere.

The Space Weather Prediction Center does not produce specific warnings about satellite drag or variations in atmospheric density for commercial satellite launches. Both factors can keep satellites from reaching orbit, and in a worst-case scenario could cause them to collide with space junk and other objects orbiting Earth.

In the paper in Space Weather, the scientists recommend stronger forecasting and alert systems while highlighting gaps in space physics that could affect prediction accuracy.

"This information will certainly become essential when dealing with space traffic coordination in an increasingly crowded space environment," they write.

In the future, the scientists say, they'll upgrade their models and begin providing new alerts. Space weather will ebb and flow, the study suggests, but public-private cooperation must remain a priority to prevent further losses.