53 rescue dogs survived a plane crash. Now you can adopt them. 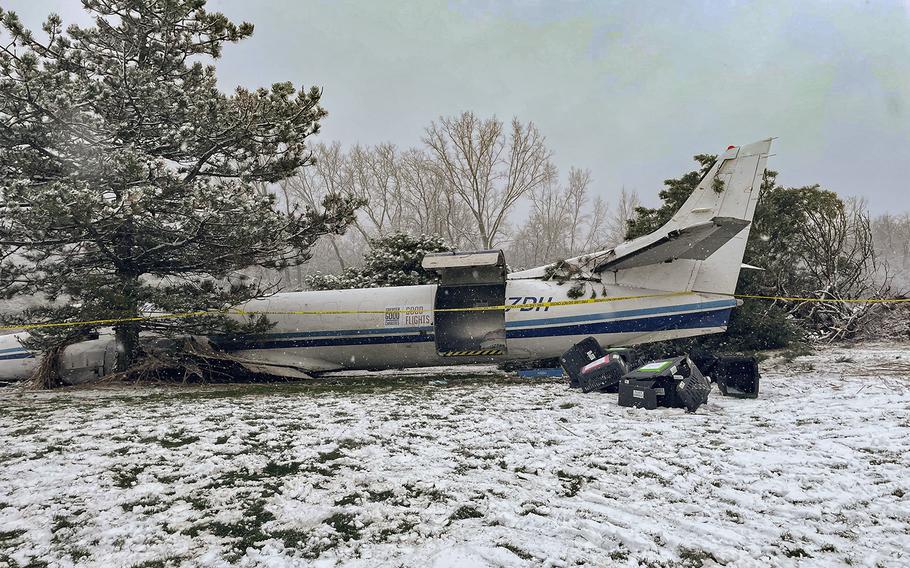 A turboprop plane that crash-landed on a golf course in Pewaukee, Wis., while transporting 53 rescue dogs from New Orleans on Tuesday, Nov. 15, 2022. (Humane Animal Welfare Society)

Tony Wasielewski pulled crate after crate from the wreckage of a plane that was supposed to carry 53 rescue dogs from New Orleans to Waukesha, Wis., on Tuesday morning. Instead, it crash-landed on a snow-covered golf course just outside of Milwaukee.

As the deputy fire chief went to grab yet another crate, one of the rescues - roaming the fuselage after freeing herself during the crash - leaped into his arms and slathered him with kisses.

Wasielewski, 47, didn't know it yet, but less than 48 hours after leaving the crash site, he would welcome that dog into his family.

It all started around 9 a.m. Tuesday when several employees at the Western Lakes Golf Club in Pewaukee, Wis., watched a twin engine turboprop airplane crash onto the green of the fifth hole, Jason Hoelz, the club's general manager, told the Milwaukee Journal Sentinel. The plane then shot through some trees - snapping off the wings - before plowing through a marsh, skidding across the second hole fairway and ramming into a tree on hole No. 3, where it came to rest.

"This was a relatively catastrophic landing," Matthew Haerter, assistant chief at Lake Country Fire and Rescue, said Tuesday at a news conference, just hours after it happened.

Everyone and every dog aboard the plane survived, although all three of the people and some of the pups suffered minor injuries. About 300 gallons of jet fuel spilled onto the golf course and into a marsh, triggering cleanup efforts from the state Department of Natural Resources, Haerter said.

For now, it's unclear what caused the crash. The Federal Aviation Administration and National Transportation Safety Board are investigating.

Upon collision, golf course employees rushed to the wreckage, pulling the pilot, co-pilot and another person from the plane before offloading the dog crates. When firefighters arrived, the employees used golf carts to ferry them to the crash site.

Maggie Tate-Techtmann, a director for the Humane Animal Welfare Society, told The Washington Post that Tuesday's flight was one of HAWS's regularly planned trips shepherding at-risk adoptable dogs from southern states to shelters in the Waukesha region. Tate-Techtmann said they usually organize two such trips a month, although most are done by van.

On Tuesday morning, HAWS had assembled a large team of employees and volunteers at the Waukesha County Airport to welcome the incoming dogs discombobulated by a roughly 1,000-mile trip. Learning about the crash, they scrambled to the golf course, about six miles away. Once there, staff veterinarians examined all of the dogs and relayed 21 of them to HAWS and the rest to other shelters in the area, as had been the plan. 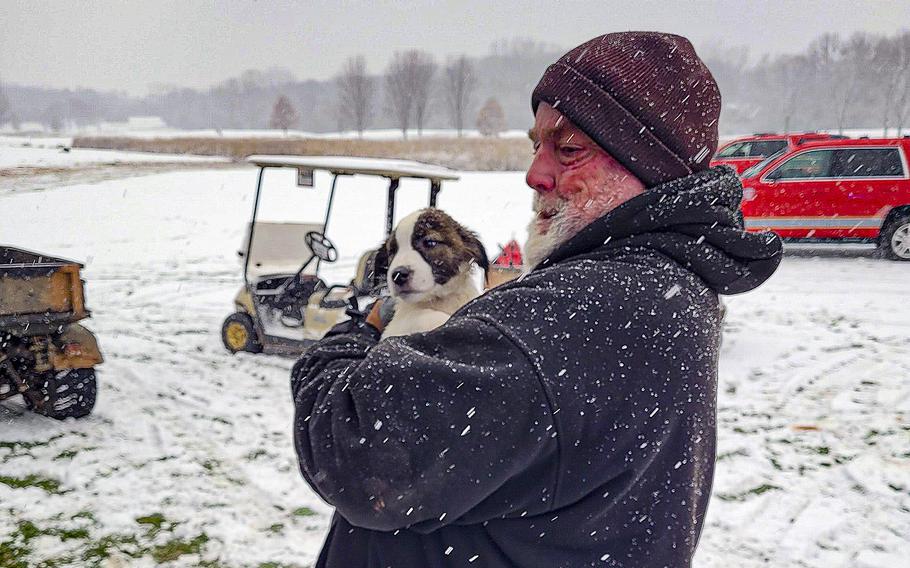 An employee of the Western Lakes Golf Club holding one of the 53 rescue dogs pulled from the wreckage of a plane that crash-landed on the club’s golf course in Pewaukee, Wis., on Tuesday, Nov. 15, 2022. (Humane Animal Welfare Society)

"It is a lot of just comforting them and caring for them," Tate-Techtmann said at Tuesday's news conference. "Every animal is different just like we are, so we're all going to react a little bit differently."

Within hours of the crash, HAWS employees started a campaign to raise money to "help cover the unforeseen medical and other costs that resulted from the incident." By Thursday afternoon, they'd raised more than $6,500, surpassing their goal of $5,000.

On Wednesday, the shelter started adopting out seven of the 53 dogs "that we're now affectionately calling the Western Lakes Loves." By the end of Thursday, they had upped that number to 19, Tate-Techtmann said.

"It is very remarkable that all of them are doing as well as they are," she added.

At least one has already found a home: Wasielewski's.

But it took a minute. After the anonymous pooch thrust herself into the deputy chief's arms and licked him, he held her for a bit. But then Wasielewski handed her off to continue his work pulling crates from the wreckage and carrying them to HAWS vehicles.

About an hour later, Wasielewski saw the dog again. This time, someone was walking her near the golf club's maintenance shed to the HAWS vans. She spotted him and tried to come over.

That was the first time the thought popped into his head: "Uh-oh, I might be getting another dog."

Wasielewski said his wife had wanted another to join the two they already had at home.

After working the plane crash, Wasielewski went home and told the story about the nameless dog to his wife, who went online to help him identify her. They made a Wednesday appointment at HAWS, where workers retrieved the dog he now knew was named CeeCee.

"As soon as the lady opened up the door, she bypassed my wife, jumped in my arms and started giving me kisses," Wasielewski said.

He adopted CeeCee, renaming her after his favorite reggae musician. Marley has since joined her two new sisters: Minka, an 11-year-old yellow Lab, and Maci, an 8-year-old Cane Corso mix.

"They've basically taken her in like she's one of them. It's actually mind-boggling how she's getting along with everyone," Wasielewski said.