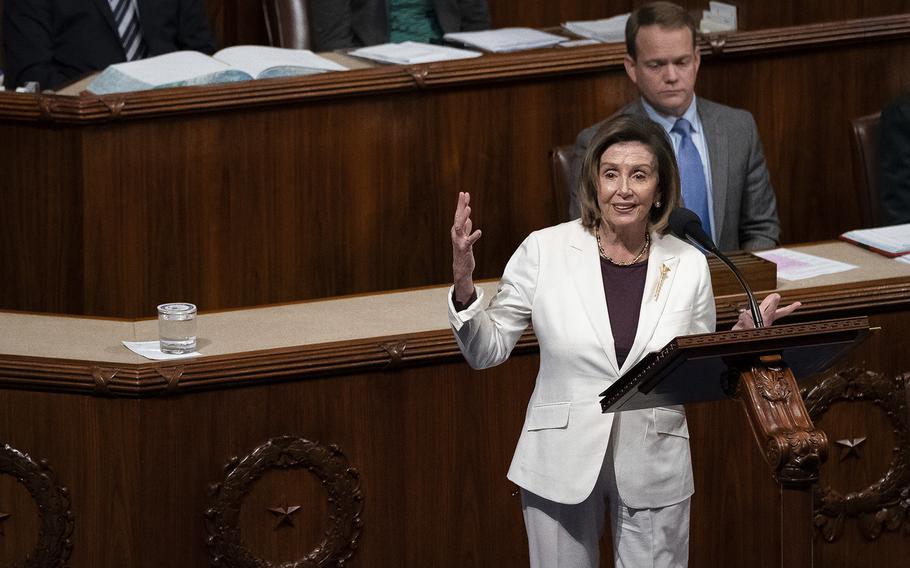 WASHINGTON — Dealing with trauma she likened to "survivor's guilt," House Speaker Nancy Pelosi says the aftermath of the October attack on her husband Paul by an assailant looking for her has left the California Democrat's family shaken.

"If he had fallen, slipped on the ice or was in an accident and hurt his head, it would be horrible, but to have it be an assault on him because they were looking for me is really - they call it 'survivor's guilt' or something," Pelosi said Thursday in her most detailed comments to date on the attack's aftermath. "But the traumatic effect on him, this happened in our house."

"It made our home a crime scene," she added.

Pelosi told reporters that her husband "is doing okay," but that he's facing a long recovery and noted that the trauma extends beyond herself and her husband - her children and grandchildren are dealing with it, too.

The speaker, who announced Thursday that she won't seek a leadership position in the next Congress, also addressed the Republicans who mocked her and her family in the attack's aftermath.

"If your spouse were in a situation where other people would make a joke of it, think it was funny, be collecting money for bail for the perpetrator, putting out a conspiracy theory about what it was about - it's so horrible to think the Republican Party has come down to this, and no real rejection of it by anybody in the party," she said. "It's so sad for our country."

During a campaign event, former Arizona GOP gubernatorial candidate Kari Lake drew laughter from a crowd after joking that the Pelosi home "doesn't have a lot of protection." Virginia Gov. Glenn Youngkin (R) also made light of the situation at a campaign rally the day the news broke, saying that while "there's no room for violence anywhere ... we're going to send [Nancy Pelosi] back to be with him in California."

Sen. Ted Cruz (R-Texas) shared a Twitter thread from a far-right activist challenging the notion that the alleged assailant was a militant right-winger - even though the attacker's blog appears to have been deeply drawn into election falsehoods and political conspiracy theories.

On Thursday, Pelosi thanked her GOP colleagues who stood by her, saying most of them "have been lovely to me."

"I feel very comforted by many of my Republican members here," she said. "So I don't paint everybody with the same brush."

Paul Pelosi, 82, underwent surgery on his skull after police say after hammer-wielding David DePape, 42, broke into the Pelosis' home, shouting "Where is Nancy?" - a chant reminiscent of what was heard during the Jan. 6, 2021, attack on the U.S. Capitol by a mob of Trump supporters who wanted to stop the certification of the 2020 presidential election results.

The attack at the Pelosi home comes after a dramatic increase in threats against lawmakers and government officials in recent years. Three men were convicted in November of aiding in a plot to kidnap Michigan Gov. Gretchen Whitmer. In a separate case, a man was convicted in late October of threatening to kill Rep. Eric Swalwell (D-Calif.). Earlier this year, a man with a gun was arrested near Supreme Court Justice Brett Kavanaugh's home after making threats against the justice.

Nancy Pelosi revealed in a Nov. 7 interview with CNN - her first televised sit-down after the attack - that Capitol Police woke her in Washington to alert her to what happened.

The Capitol Police officers "said we have to come in to talk to you," Pelosi said in the interview. "And I'm thinking, my children, my grandchildren. I never thought it would be Paul because I knew he wouldn't be out and about, shall we say."

"Paul was not the target, but he's the one who was paying the price," she said to CNN. It's a sentiment she echoed Thursday when describing the how hard it has been when the violence hit so close to home.

"People tell me that people - if you were in an accident, you would go miles around to avoid going past that accident scene," she said. "Or if, if you had a serious health issue, you wouldn't go near the hospital where you were treated because it would bring that trauma back."