Biden to mark his 80th birthday, sort of 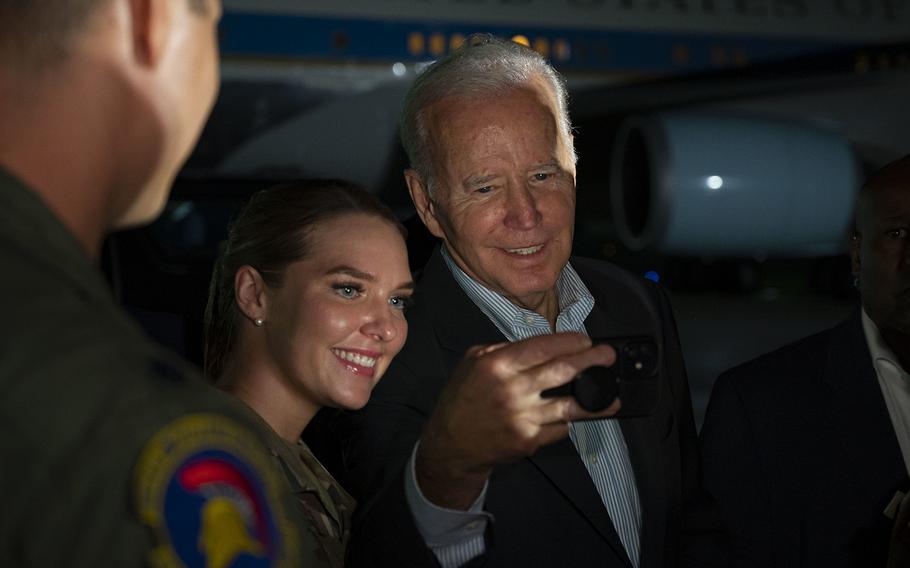 President Joe Biden takes a picture with a service member while visiting Andersen Air Force Base, Guam, on Nov. 16, 2022. Biden will turn 80 on Sunday, Nov. 20, but the White House has few plans to mark the landmark birthday in any major public way. ( Lauren Clevenge/U.S. Air Force)

It is a day that has been met with a hint of dread. The nation's oldest president is hitting a new, and most unwelcome, milestone on Sunday, and no one really wants to celebrate. Even President Biden himself.

"Somebody said my birthday is coming up," he said recently. "And I said, 'No, that must be somebody else.' "

When he was asked separately during a radio interview what an 80-year-old Biden would tell a 50-year-old Biden, he immediately responded: "That I'm still 50!"

The White House has few plans to mark the landmark birthday in any major public way. Any celebration will be eclipsed, by design or not, by the wedding festivities of Biden's granddaughter Naomi at the White House on Saturday.

At a time when Biden's age has come up again and again in focus groups and surveys, the fact that he is now the first Oval Office octogenarian is something few in the president's orbit are eager to highlight. It comes as he considers whether to run for reelection - which, if he wins, would place him at 82 during his inauguration and 86 at the end of a second term.

At the same time, any appearance of urgently trying to downplay his birthday or ignore it could carry its own peril. Biden's decision to downplay the occasion runs counter to some of his predecessors, who have embraced such moments while in office.

When Ronald Reagan - until Biden, the nation's oldest president - turned 70, celebratory moments unfolded throughout the day. House Speaker Tip O'Neill and other congressional leaders sang to him in the Oval Office. Nancy Reagan helped plan a party in the East Room that featured Frank Sinatra and Jimmy Stewart.

Reagan, whose advanced age was a dominant issue during the presidential campaign, took the approach of embracing his age, with a tinge of humor. "I want to thank you for starting out the celebration of my 31st anniversary of my 39th birthday," he joked.

President Barack Obama marked his 50th birthday with burgers with staff for lunch and a bash at the White House that included performances by R&amp;B artist Ledisi, jazz musician Herbie Hancock and legendary singer Stevie Wonder.

If Reagan's hosting of Sinatra and Stewart nodded to an old-fashioned America, Obama's guest list signaled his identification with a cooler, more youthful part of the culture, as attendees included rapper Jay-Z, comedian Chris Rock and basketball icons Charles Barkley and Grant Hill.

Some presidents did not need a milestone birthday to mark the occasion: Franklin D. Roosevelt, for his 52nd, held a toga party at the White House, dressing as Caesar while first lady Eleanor Roosevelt went as the Oracle of Delphi.

When Dwight D. Eisenhower turned 70, he had an outdoor party, planted a commemorative red oak, and listened as a crowd of 6,000 sang, "Happy Birthday, Dear Ike." "There were times when, stirred emotionally, he could not trust his voice," reported the New York Times.

By his own account, Eisenhower was moved not only by emotion but also by fear of aging. "The idea of retirement is sometimes terrifying," he confided that day. (He also said, "No one should ever sit in this office over 70 years old, and that I know.")

Biden is in a different position from those predecessors. His age - and by implication the notion that he may have lost a step - is a major part of Republican attacks on him as he weighs reelection. It has already played into the private discussions of some Democrats that he should step aside for a new generation.

Even so, Biden is not the first president to shy away from celebrating. Thomas Jefferson is said to have remarked that he only believed in celebrating one birthday - that of the country, on the Fourth of July.

"I have declined letting my own birthday be known, and have engaged my family not to communicate it," he wrote in 1803.

James K. Polk, the first president to turn 50 while in office, did not even realize it was his birthday until he heard a church sermon that day, historians say.

Biden, in contrast, has found himself fending off questions about his age throughout his presidency. Kevin O'Connor, Biden's physician, has deemed Biden "fit for duty" but also noted last year that the president's gait had become "stiffer and less fluid" since the 2020 election, highlighting a case of spinal arthritis and the lingering effects of a foot fracture.

Biden has said it is fair for people to ask about his age, but he also seeks to minimize any concerns by jogging onto stages, touting his accomplishments and telling voters: "Watch me."

Andrew Bates, the deputy White House press secretary, pointed to that phrase, along with a string of accomplishments during Biden's first two years, including the better than expected midterm results. "Keep watching," he said.

Biden has been prickly about the age issue for some time. During an event in Iowa during his presidential campaign, an 83-year-old farmer pointedly questioned his age, telling the then-77-year-old candidate, "I'm 83, and I know damn well I don't have the mental faculties I did 30 years ago."

"I'm not sedentary," Biden said, growing angry. "You want to check my shape, man, let's do push-ups together here, man. Let's run. Let's do whatever you want to do. Let's take an IQ test. Okay?"

But he also has at times used his age as a punchline.

"The very first president to attend the White House correspondents' dinner was Calvin Coolidge in 1924. I had just been elected to the United States Senate," Biden said in April, during this year's version of that dinner. "I remember telling him, 'Cal, just be yourself. Get up there and speak from the heart. You're going to be great, kid.' "

Biden has often told a story of Satchel Paige, the baseball player who pitched a winning game at age 47 and was approached by reporters afterward. He even told the story to Pope Francis last year.

"They come in and said, 'Satch, no one's ever pitched a win at age 47. How do you feel about pitching a win on your birthday?' " Biden told Francis, according to video of the event. "And he looked at them and he said, 'Boys, that's not how I look at age. I look at it this way: How old would you be if you didn't know how old you were?' "

Biden then looked at the Pope, who is nearly six years older Biden.

Biden likes to mark other people's birthdays, if not his own. A few weeks ago, he recorded a video excitedly wishing comedian and TV host Joy Behar a happy birthday as she beat Biden to turning 80.

In 2016, when Obama turned 55, Biden tweeted at him, "A brother to me, a best friend forever," with an image of friendship bracelets.

When they were in office, Biden and Obama often gave each other birthday gifts. "It's hard, but since we both love golf, we usually give each other something having to do with golf," Biden told TMZ in 2013. "I gave him a real unique golf bag last time, and he gave me this real cool deal to practice putting. It's a little gadget. It's really great."

When Harris turned 57 last year, Biden walked to her office and presented her with flowers and a framed photo of them together.

As for Biden's own birthday last year, Biden's brother Jimmy gave him a purebred German shepherd, which the Bidens named Commander.

During one birthday when he was a senator, he asked the then-majority leader, Sen. Bob Dole, R-Kan., to postpone a few votes so he could take the Amtrak train back to Delaware and see his family, however briefly.

"My daughter is really upset I'm not going to be able to be home for the birthday cake she made for me," Biden recalled telling Dole.

So he took the train home, getting off around 6:30 p.m. His wife and daughter were standing on the platform with the cake and candles.

"I blew them out. Gave me a kiss," Biden recalled last year, while marking Amtrak's 50th anniversary. "Walked across and got on the southbound."