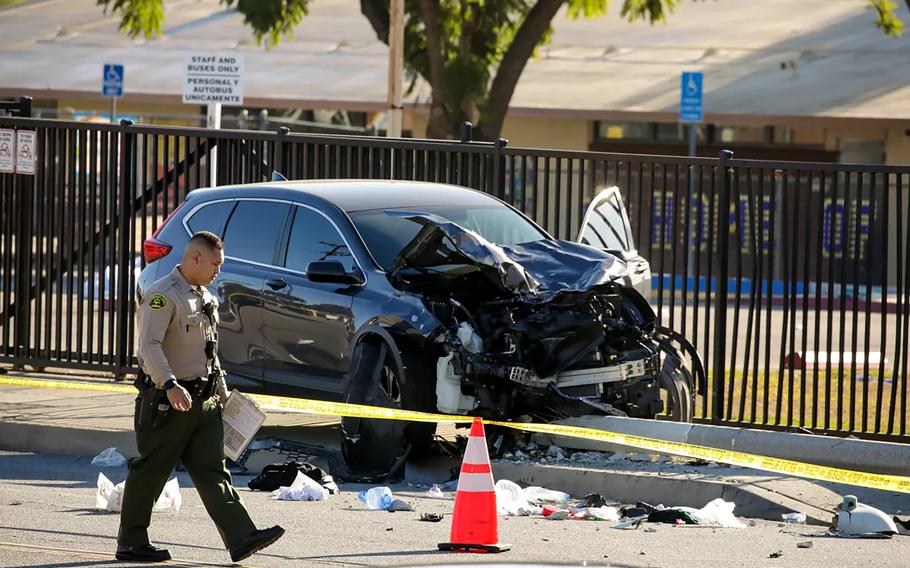 An SUV that struck Los Angeles County sheriff’s cadets during a morning run Wednesday, Nov. 16, 2022, rests at the base of a toppled light pole in Whittier, Calif. (Irfan Khan/Los Angeles Times/TNS)

LOS ANGELES (Tribune News Service) — Authorities arrested a 22-year-old man on Thursday after a vehicle plowed into a large group of Los Angeles County Sheriff’s Department cadets who were out on a training run in South Whittier, injuring more than two dozen of them, five critically.

Nicholas Joseph Gutierrez was arrested on suspicion of attempted murder on a peace officer in connection with Wednesday’s crash, authorities said.

Twenty-five sheriff’s recruits were injured in the early morning crash, authorities said. The status of their conditions was unclear early Thursday.

The recruits were running in four columns and were joined by drill instructors and two black-and-white radio cars at the time the crash occurred about 6:30 a.m. Wednesday near the sheriff’s STARS Center Academy in the 10600 block of Mills Avenue, authorities said.

As the recruits ran northbound down Mills Avenue, a Honda CRV approached at 30 to 40 mph, according to witnesses. The vehicle veered onto the wrong side of the road and plowed into the group.

Those runners at the front of the column were able to get out of the way before the vehicle hit others and crashed into a light pole, authorities said. Video shot by a man who lives across the street from the crash showed recruits desperately trying to help those who appeared to be most seriously injured.

One witness said “it looked like an airplane wreck,” Sheriff Alex Villanueva said at a news conference Wednesday.

“There was so many bodies scattered everywhere in different states of injury that it was pretty traumatic for all individuals involved,” he said. He called the injuries, which included head trauma and lost limbs, “life-altering.” More than a dozen others suffered minor to moderate injuries.

The driver of the vehicle was detained at the scene by cadets. He sustained minor injuries and was taken to a hospital, authorities said.

A Breathalyzer test was administered at the scene and authorities found no evidence of alcohol, Villanueva said.

Authorities detected no smell of alcohol on him, and he “blew a 0.0” during a breathalyzer test administered at the scene, Villanueva said.

The arrest came hours after authorities searched the suspect’s home on Wednesday night. News video showed deputies banging on the door of the family home in Diamond Bar. A tactical team with guns drawn was also present.

Authorities made entry after escorting two women out of the home. The video showed authorities spent some time inside, but they did not appear to remove anything visible from the home.

Academy Class 464 was in its eighth week.