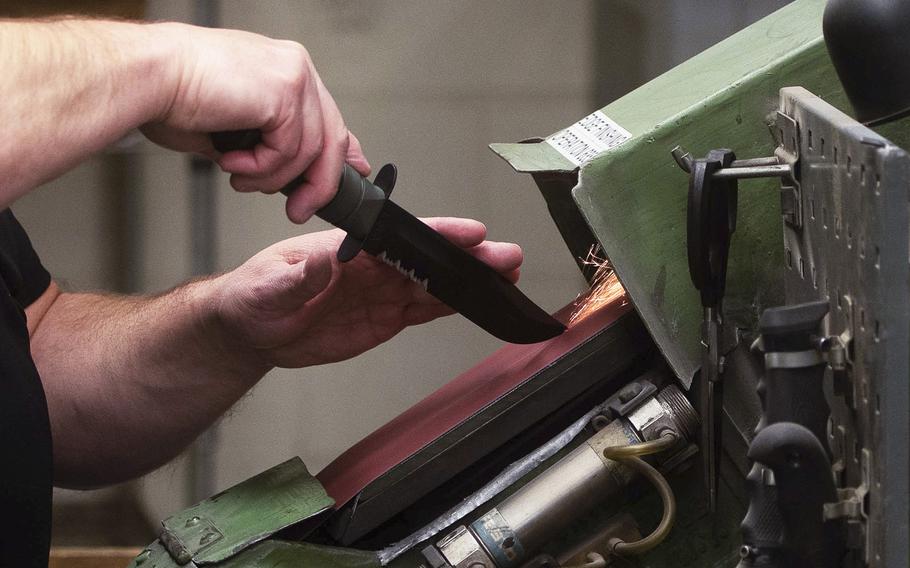 A KA-BAR knife is put through the edge finishing process in the Cutco factory, in Olean, New York, on Nov. 20, 2019. KA-BAR has been issuing knives to the Marine Corps since Dec. 9, 1942. (Fernando Moreno/U.S. Marine Corps)

MOSCOW, Idaho (Tribune News Service) — Moscow police appear to be searching for a “Rambo”-style knife involved in the killing of four University of Idaho students, a store manager said Wednesday.

Scott Jutte, general manager of Moscow Building Supply, told the Idaho Statesman that police have visited the store more than once to ask whether the retailer sold anyone Ka-Bar brand knives, which are also known as K bar knives.

Ka-Bar, of Olean, New York, manufactures military-grade blades that were originally designed for use by American troops in World War II.

Jutte said a police officer stopped by the home improvement store and lumber yard off North Main Street in Moscow to speak with him on Monday.

“They were specifically asking whether or not we carry Ka-Bar-style knives, which we do not,” Jutte said in an interview. “If we did, we could’ve reviewed surveillance footage. But it wasn’t something I could help them with.”

Jutte said he is familiar with the military-style weapon even though his store doesn’t sell it.

Moscow police Wednesday would neither confirm nor deny that their investigation led them to Moscow Building Supply or whether they interviewed Jutte, Capt. Anthony Dahlinger told the Statesman.

“I can’t speak to that,” Dahlinger said by phone. “I don’t have any new information to share.”

On Wednesday, Day 4 of their investigation, Moscow police were scheduled to hold a news conference at 3:30 p.m. Pacific (4:30 Mountain).

Ka-Bar knives are about 6 inches long and “similar to the knife Rambo has,” Jutte said, with a blade on one side and a serrated edge on the other. The knives Moscow Building Supply sells are primarily used for hunting, he said.

“(Ka-Bar) is more of a combat knife,” Jutte said. “It’s not really something that we specialize in.”

Ka-Bar knives were issued by the U.S. Marine Corps in the 1940s, according to the company’s website. They were later adopted by other branches of the military. Today, the company’s knives are widely used by survivalists and outdoorsmen.

A Ka-Bar representative did not return a Statesman request for comment Wednesday.

The new detail came a day after Moscow police released information that the four U of I students were killed in what they labeled a “targeted attack” with an “edged weapon” such as a knife. Police had yet to recover a weapon, name a suspect or announce an arrest, Dahlinger confirmed Wednesday.

The four student victims in the early morning Sunday slayings were U of I seniors Madison Mogen, 21, of Coeur d’Alene, and Kaylee Goncalves, 21, of Rathdrum; junior Xana Kernodle, 20, of Post Falls; and freshman Ethan Chapin, 20, of Mount Vernon, Washington.

In response to a Sunday afternoon 911 call reporting an unconscious person in the 1100 block of King Road, Moscow police and a fire medical team arrived to the house just off campus a little before noon. There, officers found the four dead students.

For days, authorities have declined to address how they died. The mother of one of the victims told the Statesman Tuesday that police told her they died of stab wounds. Latah County Coroner Cathy Mabbutt told Spokane’s KXLY TV that her preliminary investigation showed the four U of I students were stabbed to death.

Reached on her cellphone Wednesday, Mabbutt declined to confirm that, saying results of the autopsies were expected later in the day, or possibly Thursday.

Mabbutt acknowledged the unprecedented circumstances of the students’ deaths, based on her 16 years in the elected office.

“It’s pretty unusual to have four homicides at one time, especially in a small community,” Mabbutt said.