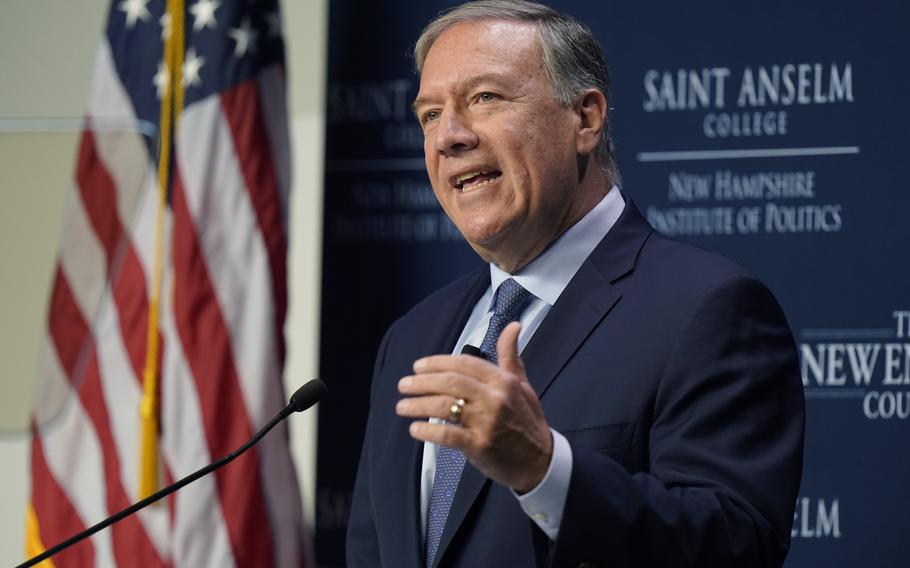 Former Secretary of State Mike Pompeo addresses an audience at a periodic “Politics and Eggs” gathering at Saint Anselm College, in Manchester, N.H., Sept. 20, 2022. The Biden administration has determined that Iranian threats against Pompeo and one of his former top aides remain credible and persist. (Steven Senne/AP)

WASHINGTON — The Biden administration has determined that Iranian threats against former Secretary of State Mike Pompeo and one of his former top aides remain credible and persist nearly two years after they left office.

The State Department notified Congress last week that both Pompeo and Brian Hook, who served as special representative for Iran during the Trump administration, were still both subject to a "serious and credible threat from a foreign power or agent of a foreign power" stemming from their work while in government.

The determinations — which mean Pompeo and Hook will continue to receive government protection — were signed by Deputy Secretary of State for Management Brian McKeon on Nov. 8 and sent to Congress on Nov. 9, according to the notifications obtained by The Associated Press.

“I hereby determine that the specific threat with respect to former Secretary of State Michael Pompeo persists,” McKeon wrote. He used identical language to refer to the threat against Hook.

The AP reported in March that the State Department was paying more than $2 million per month to provide 24-hour security to Pompeo and Hook. The latest determinations — the eighth for Hook and the fifth for Pompeo since they left government in January 2021 — did not give a dollar amount for the protection.

The notifications do not specifically identify Iran as the source of the threats, but Iranian officials have long vented anger at Pompeo and Hook for leading the Trump administration’s “maximum pressure” campaign against Iran, including designating Iran’s Islamic Revolutionary Guard Corps a “foreign terrorist organization” and subjecting it to unprecedented sanctions.

In addition, some Iranian officials have accused them of green-lighting a U.S. drone strike that killed IRGC commander Qassem Soleimani in Baghdad in Jan. 2020.

The State Department would not comment on the notifications or the specific details of its protective operations. But, it said Congress has allocated up to $30 million to provide protection to former or retired department officials deemed to be at risk because of their government service.

“As new requirements arise and threats evolve, we will seek the necessary resources to ensure mission success,” it said. “The department’s protection is consistent with its authorities.”

Hook declined to comment and a spokesman for Pompeo did not immediately respond to an inquiry.

Even as the Biden administration made successive threat determinations and spent millions for Pompeo and Hook’s protection, it continued to press ahead with indirect talks with Iran aimed at salvaging the 2015 Iran nuclear deal that former President Donald Trump withdrew from in 2018.

Those talks have been stalled for months now and the administration is pessimistic they will resume anytime soon. The administration has blamed Iran for the breakdown in talks, saying it has raised demands outside the scope of the deal, which gave Tehran billions in sanctions relief in return for curbs on its nuclear program.

In the meantime, Iran has launched a major crackdown on antigovernment protests sparked by the death of a woman in custody who was accused of violating a law requiring women to wear headscarves in public.

“The eyes of the world are on Iran,” Sullivan said in a statement. “The human rights abuses inflicted by its government must not go without consequence.”