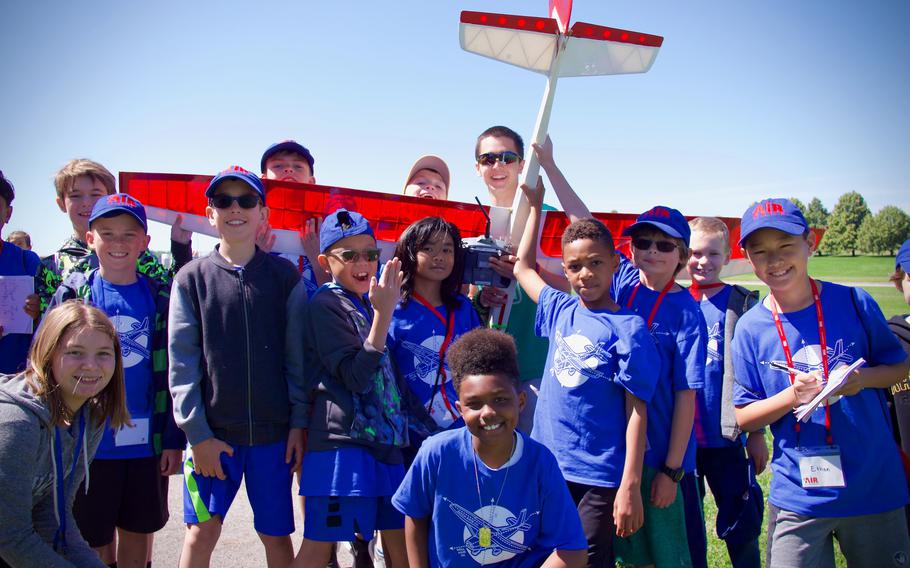 Air Camp accepts students from grades four to 12 for a variety of educational experiences designed to inspire interest not just in aviation and aeronautics, but all STEM (Science, Technology, Engineering and Mathematics) fields. (Air Camp/Facebook)

Mostly smooth, at least. After landing, the 17-year-old Oakwood High School, Dayton, Ohio, student looked up from her trio of computer monitors at David Lindamood, her flight instructor at Lewis Jackson Airport near Xenia.

"I think you got the touch," Lindamood told her.

"I could have crashed," Epley said.

"No, that was more of a bounce than a crash," he replied with a smile.

Air Camp accepts students from grades four to 12 for a variety of educational experiences designed to inspire interest not just in aviation and aeronautics, but all STEM (Science, Technology, Engineering and Mathematics) fields.

Air Camp leaders believe they offer a long-term solution to the shortage of pilots and flight crew.

The idea is to use hands-on experiences around planes to turn students' sights toward STEM professions at a time when those professions have a dire need for qualified people.

"The need is well documented, it is ubiquitous and it is growing," said Richard Reynolds, a retired Air Force lieutenant general and Air Camp co-founder.

According to the National Science Foundation, employment in science and engineering is expected to grow faster than overall employment through 2019 to 2029, 10% vs. 4%, respectively. And the U.S. Bureau of Labor Statistics shows that employment in STEM occupations grew 79% in the past three decades.

On a recent Saturday at the Greene County airport, Epley was one of 43 girls participating in a one-day Air Camp session requested by Women in Defense, an organization dedicated to advancing the careers of women in national defense fields.

The organization sought a girls-only event, Reynolds said. Women in Defense has been a solid Air Camp supporter, and Air Camp, a 501(c)(3) non-profit, was happy to oblige, he said.

Also on hand that day: five female representatives of the 71st Flying Training Wing from Vance Air Force Base in Enid, Okla.

Coblentz acknowledges that boys and girls cannot be "insulated by gender" over the long term. But she believes girls can be more "relaxed" and receptive sometimes among other girls.

"You have to be open to what we show them," Coblentz said.

If the one-day event went as planned, Coblentz said, some young girls would walk away aware of a simmering new interest in aviation or a related field.

"That's what's wonderful and brave about why they're here," she said. "Some girls don't even know they're interested in it."

Epley is already on the path. She said she plans to apply to the Air Force Academy in the spring. Taking advantage of the Air Camp session at the Lewis Jackson Airport was an easy choice for her.

"It sounded like a really good opportunity," she said.

Thomas Lasley — Learn to Earn Dayton chief executive and an Air Camp supporter — cautions that Air Camp is not a fast solution to the shortage of pilots. "We are not focused on a short-term quick fix," he said. "Our focus is long term."

From the outset, the vision of Air Camp founders and supporters has remained constant. They also equip teachers to spark interest in STEM careers.

"We want kids to pay attention in science and math in high school," Reynolds said.

Air Camp emphasizes hands-on experiences, said Vince Russo, a University of Dayton engineering professor and longtime Air Camp partner. The idea is to give students a chance to see and touch airplanes.

And, yes, fly them. For older students, that includes a chance to fly when conditions are right. (But on the day of the recent girls-only event in Greene County, rain threatened and conditions were too windy for flights.)

Last year, Air Camp had students from 33 states and Puerto Rico. The overall effort operates with a modest staff of about six people, Russo said. But summer Air Camp sessions will see the hiring of some of the best local STEM teachers to act as "flight leaders," he said. The organization hired about 30 such teachers this summer.