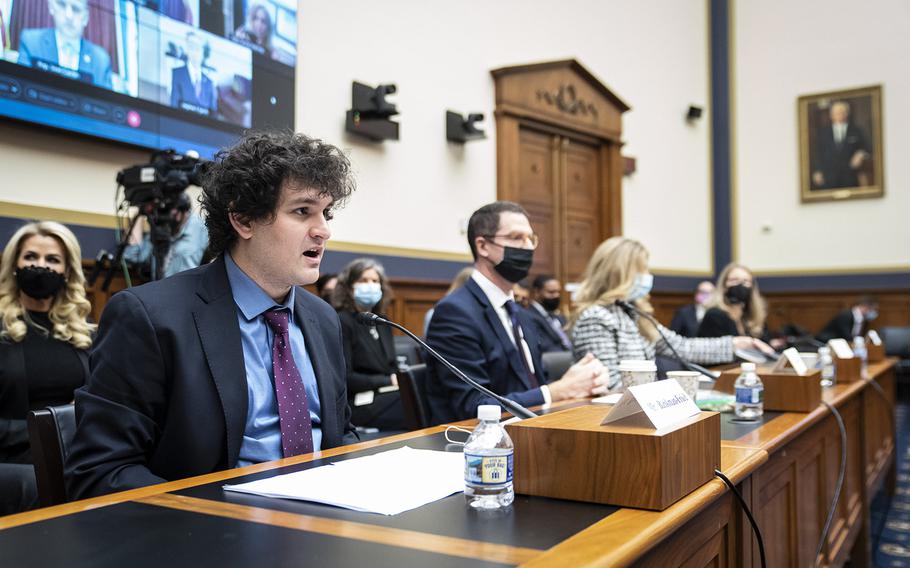 WASHINGTON — Sam Bankman-Fried, the 30-year-old wunderkind of cryptocurrency, spent tens of millions of dollars over the past year trying to reshape how Washington and the world think about finance.

The crypto exchange he founded, FTX, had become an industry-dominating business in just three years, valued at $32 billion as recently as January. He amassed political clout in an even bigger hurry, emerging from obscurity to become the second-biggest Democratic donor in the midterm elections.

By Friday, the money and the clout had disappeared: Bankman-Fried resigned from FTX, which then filed for bankruptcy. On Saturday, the company revealed it was investigating "unauthorized transactions" worth more than $400 million and that it had moved all funds into offline storage. And Bankman-Fried was left facing harrowing questions about his role in the most catastrophic collapse the notoriously volatile crypto industry has so far seen.

With his disheveled appearance, super-casual manner and earnest insistence that he was trying to use his money to save the world, Bankman-Fried stood apart from the stereotype of crypto brats blowing instant riches on Lamborghinis and yachts. His purported power over the crypto market drew comparisons to Wall Street financier J.P. Morgan, yet he saw himself as using his fortune for good, not greed.

How his career careened off course is a tale of ambition, hubris and ultimately recklessness - the full contours of which have yet to be publicly revealed.

When Bankman-Fried was just 28, he built a platform that offered investors easy access to buying, selling and stashing bitcoin and other cryptocurrencies. The offshore exchange allowed investors to place risky bets not allowed in the United States, though it was easy enough for American users to find workarounds; a U.S. affiliate offered limited services. With a massive marketing push - including a flashy Super Bowl ad and naming rights to the Miami Heat arena - he sought to make crypto trading a mainstream pastime.

Meanwhile, he was using his newfound political clout to sell Washington on a regulatory regime that promised to work to his advantage. The contrasts were glaring and never easily reconciled: As crypto's self-appointed ambassador to Washington, Bankman-Fried was pressing for federal regulation even as he dodged U.S. oversight from his corporate headquarters in the Bahamas.

The executive acknowledged that FTX's aggressive lobbying made him an outlier in crypto. "Outside of us, there weren't many people engaging," Bankman-Fried said in an interview last month with The Washington Post. "I think that means we have to do a better job as an industry more generally engaging."

In March, he appeared at the House Democratic retreat in Philadelphia with his arm around House Financial Services Committee Chair Maxine Waters (D-Calif.). In April, he turned up in the office of Caroline Pham, a Republican member of the Commodity Futures Trading Commission, less than a week after she assumed the post, along with Mark Wetjen, the former acting chair of the agency and now Bankman-Fried's top Washington adviser. Hill staffers say they regularly spotted him around the Capitol, shuttling between meetings flanked by Wetjen and Eliora Katz, who joined FTX this summer from the staff of the Senate Banking Committee's top Republican, Patrick J. Toomey (Pa.)

Many crypto die-hards viewed his overtures to Washington as a betrayal of crypto's founding mission. That set the stage for his most formidable adversary - Changpeng Zhao, CEO of Binance, a rival crypto exchange - to crush him with stunning and decisive swiftness.

On Sunday, Zhao announced he was selling off his investment in FTX: $580 million of a crypto token FTX had been using to prop up its debts. "We are not against anyone," Zhao wrote on Twitter. "But we won't support people who lobby against other industry players behind their backs."

Now, the regulators Bankman-Fried had been wooing are circling. His unorthodox management style - maintaining a relatively skeletal staff and presiding over an exchange interconnected with a sister trading firm and a U.S. affiliate - are under scrutiny.

Bankman-Fried keeps tweeting apologies. "I'm really sorry, again, that we ended up here," he wrote Friday. But he has yet to offer answers to customers and investors wondering where their money has gone and whether they will recover it.

Raised in the Bay Area by parents who are Stanford Law School professors, Bankman-Fried headed East for college, studying physics and math at the Massachusetts Institute of Technology in the 2010s. While there, he developed an interest in effective altruism, a philosophy that encourages adherents to earn as much as they can so that they can donate as much as possible to minimize suffering in the world.

After graduating in 2014, Bankman-Fried went to work for Jane Street Capital, a Wall Street investment firm. He quit three years later and founded his own crypto-focused trading firm, Alameda Research, then launched FTX in 2019. He moved his budding empire from Hong Kong to the Bahamas last fall.

FTX is not the first crypto business to collapse in recent months. The industry has been rocked by a sell-off that wiped out two-thirds of crypto market value, roughly $2 trillion, as the value of bitcoin has fallen from roughly $68,000 a year ago to $17,000 now. The failure of stablecoin issuer Terra Luna in May set off a chain reaction that brought down lenders Voyager Digital and Celsius Network and the crypto hedge fund Three Arrows Capital.

But Bankman-Fried spent massively to market FTX as a trustworthy investment platform. The company paid $135 million for the naming rights to the Miami Heat arena; it signed a deal with Major League Baseball to affix its logo to umpires' uniforms. It added pop-culture star power by recruiting football legend Tom Brady and wife Gisele Bündchen as spokespeople and airing a Super Bowl ad featuring comedian Larry David.

Bankman-Fried also put himself forward as an unlikely public face of the company, becoming a constant presence on Twitter, conference stages, podcasts, cable television and print media. He understood that his sartorial quirkiness - he often appeared in shorts and T-shirts under an unkempt mop of curls - presented a disarming contrast to slicker peers in both crypto and traditional finance, people close to him said.

In Washington, Bankman-Fried embraced the halo effect conferred by his philanthropic work. A billboard advertising FTX went up in Union Station earlier this year, featuring a smiling photo of the crypto magnate and the words, "I'm in on crypto to make a global impact for good."

That double-barreled pitch was on display again last month, when he hosted a happy hour to lobby a half-dozen Democratic Senate aides on his crypto regulatory agenda at the Capitol Hill headquarters of his organization dedicated to preventing future pandemics.

Attendees said Bankman-Fried used the event to argue that Congress should urgently pass a bipartisan Senate bill that would hand significant oversight of centralized crypto exchanges - including FTX - to the CFTC, which is viewed as a friendlier alternative to the Securities and Exchange Commission. The session at the $3.3 million private townhouse ended when Bankman-Fried's younger brother, Gabe - director of Guarding Against Pandemics, the advocacy group based there - stopped by, thanked the aides for their support on pandemic preparedness issues and pulled the crypto executive into a separate meeting.

The bill Bankman-Fried was pitching - the Digital Commodities Consumer Protection Act, sponsored by Sens. Debbie Stabenow (D-Mich) and John Boozman (R-Ark.) - has drawn criticism both from advocates of stricter financial regulation for not going far enough and from some crypto operators who say it is too draconian. Yet those close to the process say Bankman-Fried's advocacy pushed the measure into potential consideration for year-end action by a Congress that remains, for now, under Democratic control.

For Bankman-Fried, the bill would provide his brand of crypto finance a regulatory blessing that would help him grow his business. He believed it would usher in a wave of investment from traditional players scared off by the industry's Wild West reputation.

"If you talk to most institutions right now, they're interested, they're dabbling," he told The Post. "But for them to feel comfortable making a big move in the digital asset ecosystem, they need to see regulatory clarity."

Even some crypto lobbyists were unaware how much traction Bankman-Fried had gained in Congress. But in late September, they got a wake-up call during a New York dinner hosted by Ryan Selkis, CEO of crypto market intelligence firm Messari.

The event, for which Selkis rented out Ernesto's, a Spanish restaurant on the Lower East Side, was meant in part to celebrate the industry's maturation in Washington. But talk quickly turned to the latest developments on the Hill.

"Can we talk about the elephant in the room?" Kristin Smith, executive director of the Blockchain Association, said to the group, participants said. "Sam is selling out the industry to get a monopoly for FTX."

Bankman-Fried was not at the New York dinner. But last month, he attempted to confront those concerns at another private meeting of crypto lobbyists at the Kimpton Banneker Hotel in Washington. Organized by Selkis as a follow-up session, the gathering aimed to forge consensus on strategy among the industry's top government affairs representatives.

The FTX chief made a case for rallying behind the Senate bill, arguing in part for the virtue of establishing the CFTC's authority, attendees said. But the pitch failed to win converts.

"It wasn't a conversation, so to speak," one attendee said, speaking on the condition of anonymity to discuss a private meeting, implying that Bankman-Fried believed he alone spoke for the industry.

In the wake of FTX's collapse, critics of the bill are arguing for a pause in Washington.

"We don't need more legislation. We need more money and support for regulators to go after what is fundamentally a lawless industry," said Dennis Kelleher, president of Better Markets, which advocates for tougher financial regulation. "We need elected officials to prioritize the public interest rather than campaign contributors and lobbyists."

Meanwhile, Bankman-Fried's partners are bolting. The Miami Heat and Miami-Dade County announced Friday they are terminating their relationship with the company and looking for a new naming rights partner for the arena. The Crypto Council for Innovation, a leading crypto industry lobbying group, announced they had accepted the resignation of FTX's U.S. affiliate. And the team behind the FTX Future Fund, one of its philanthropic efforts, said in an open letter they had quit.

What happens next, on Capitol Hill and beyond, remains in doubt. Zhao, for his part, predicted more pain as shock waves from FTX's collapse continue to reverberate.

"It's devastating for the industry," the Binance chief said at a conference in Indonesia this week. "With FTX going down, we will see cascading effects."