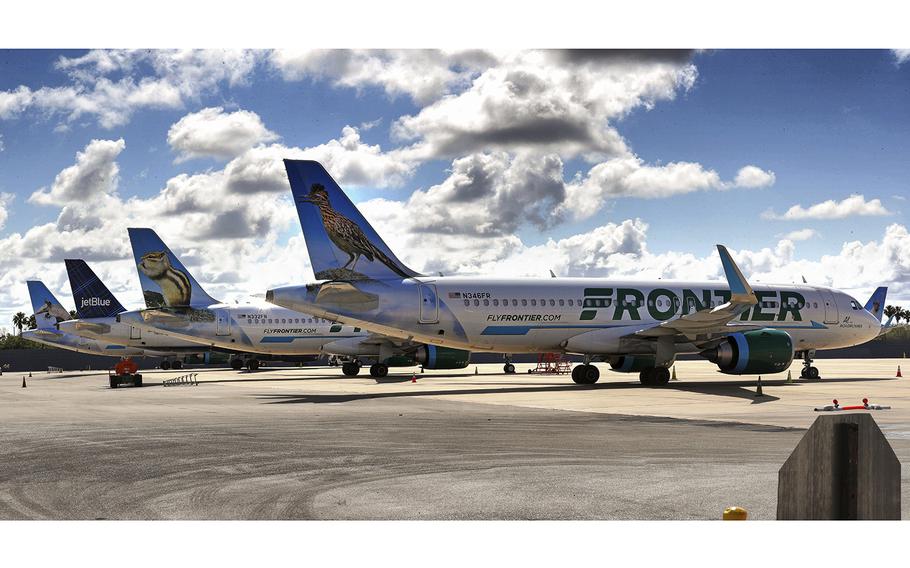 Frontier planes are parked at Orlando International Airport on April 7, 2020. A Tampa, Florida-bound jet was diverted to Atlanta late Friday, Nov. 11, 2022, after a passenger was spotted with a box cutter, the airline says. (Joe Burbank/Orlando Sentinel/TNS)

ATLANTA (Tribune News Service) — A Frontier Airlines flight headed to Florida had to land in Atlanta late Friday after a passenger was spotted with a box cutter, according to the airline.

The Transportation Security Administration said "a disturbance involving a disruptive passenger in possession of a box cutter" prompted the flight to be diverted.

No injuries to passengers or crew members have been reported, according to de la Cruz. No information on how the passenger was able to board the plane with the box cutter was provided.

"The aircraft landed safely in Atlanta and the passenger in question was taken into custody by Atlanta law enforcement," de la Cruz said.

After the suspect was apprehended, a search was conducted and a second box cutter was discovered in the passenger's carry-on, according to TSA spokesperson Carter Langston. The Atlanta Journal-Constitution has reached out to the FBI for the suspect's name and charges.

All other passengers had to deplane the aircraft and were provided overnight hotel accommodations in Atlanta. A new flight was scheduled, leaving the airport at 9:35 a.m. and landing in Tampa by about 10:35 a.m.

"TSA has started an internal review of the incident by viewing CCTV (and) airport security checkpoint processes/operations," Langston said. "TSA can confirm that blades are prohibited in the cabin, but allowed in checked luggage."