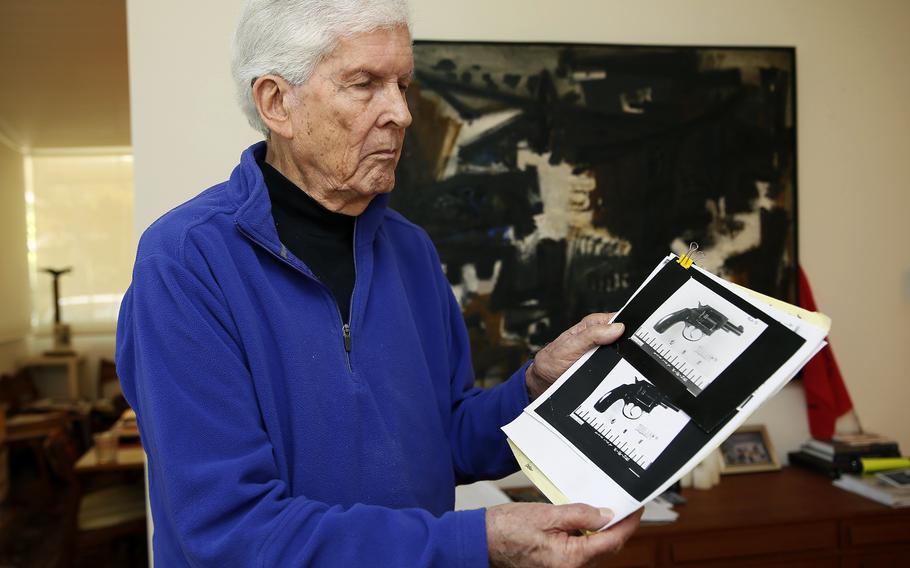 Sen. Robert Kennedy aide Paul Schrade holds an evidence photo of gunman Sirhan Sirhan's revolver with the eight expended shell casings found in the chamber, and the Weisel, Goldstein, and Kennedy bullets, at his home in Los Angeles on May 31, 2018. Schrade, a labor union leader who was shot in the head during the assassination of Robert F. Kennedy and spent decades convinced that Sirhan wasn't the killer, died Wednesday, Nov. 9, 2022, of natural causes. He was 97. (Damian Dovarganes/AP)

LOS ANGELES — Paul Schrade, a labor union leader who was shot in the head during the assassination of Robert F. Kennedy and spent decades convinced that Sirhan Sirhan wasn't the killer, died Wednesday of natural causes. He was 97.

Schrade was among five people who were wounded but survived the June 1968 shooting at the Ambassador Hotel in Los Angeles. Kennedy, a senator and the younger brother of slain President John F. Kennedy, had just won the 1968 Democratic presidential primary in California.

"I got hit by the first shot," Schrade had told the Los Angeles Times. "I was right behind Bobby. It was meant for him and got me. I thought I had been electrocuted. I was shaking violently on the floor and saw flashes."

Sirhan was tackled, arrested and later convicted of Kennedy's murder. His brother-in-law said Schrade wasn't a friend of Sirhan but did forgive him.

Sirhan testified at his trial that he had been drinking and didn't remember the shooting.

Schrade later became convinced that the wrong man had been imprisoned and that a second attacker who was never identified was the real killer, but it was hushed up by the Los Angeles County district attorney's office.

Schrade spent much of his time perusing official files and documents and touching base with others who doubted the official conclusions about the killing. The LAPD reinvestigated the slaying in the 1970s but again concluded that Sirhan acted alone.

"I know what kept Paul alive was his driving goal to have the investigation ... reopened," Weil said.

"This was his sole reason for continuing. He was determined. He was driven," Weil said. "He said to me just last week when he came home from the hospital: 'I've got to get back to my desk. I have work to do.'"

In 2016 during his 15th parole hearing, Schrade faced Sirhan face-to-face for the first time since Schrade testified at Sirhan's 1969 trial. Schrade's voice broke with emotion at times during his hour of testimony that recounted his efforts to unravel questions about the shooting of Kennedy.

"I forgive you for shooting me," Schrade told Sirhan at the hearing. "I should have been here long ago, and that's why I feel guilty for not being here to help you and to help me."

Schrade repeatedly apologized for not attending any of Sirhan's previous 14 parole hearings.

Schrade last spoke in favor of Sirhan's release at his parole hearing in 2021, which was held on Zoom during the pandemic. Schrad told the parole board: "Sirhan was not the shooter of my friend Robert Kennedy."

The board voted to free Sirhan, but the governor ultimately decided to leave him in prison.

Schrade was born in Saratoga Springs, New York, on Dec. 17, 1924. He rose through the ranks of the United Automobile Workers Union and was deeply involved in other civil rights causes, including efforts to unionize farmworkers in California. He introduced Kennedy to Cesar Chavez and Dolores Huerta, two leaders of that struggle.

"He spent his life fighting for people who were underserved," his brother-in-law said.

Schrade also was involved in efforts to create a public schools complex on the site of the Ambassador Hotel, which was purchased in 1989 by a partnership affiliated with Donald Trump that planned to erect a 125-story building on the site. There followed years of legal battles and public controversy involving the Trump group, the Los Angeles Unified School District — which wanted to buy the land under eminent domain — and conservationists.

Eventually, the hotel site became the campus of Robert F. Kennedy Community Schools. The library there is named in Schrade's honor.

"Paul Schrade was a fierce warrior for humanity and justice," school board member Mónica García said in a statement.

Schrade is survived by a sister, Louise "Weezie" Duff. His wife, Monica Weil, died in 2019.