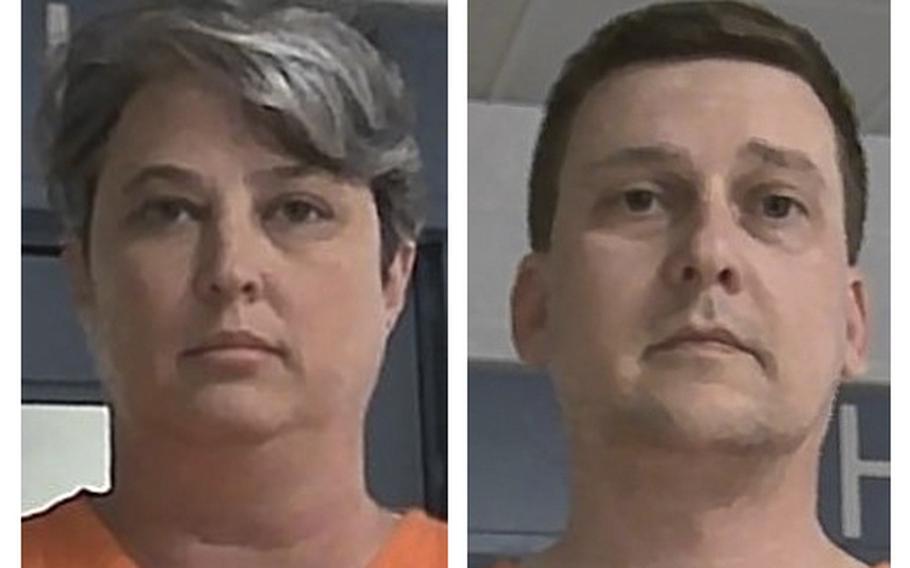 A Navy engineer who tried to sell military secrets to a foreign country was sentenced Wednesday to more than 19 years in prison, and his wife was sentenced to just shy of 22 years for aiding his plans and then attempting to hide her role.

Jonathan Toebbe, a civilian nuclear engineer with a top-secret security clearance, and Diana Toebbe, a private-school teacher in their hometown of Annapolis, Md., admitted they tried to sell restricted data about nuclear propulsion systems on submarines to a foreign country — a violation of the Atomic Energy Act that carries a maximum penalty of life in prison.

Jonathan Toebbe over several months in 2021 provided thousands of pages of documents to undercover FBI agents posing as representatives of the foreign nation, which is not named in court papers, according to his guilty plea. The restricted data included “some of the most secure and sensitive information about our nuclear-powered fleet,” according to the commander of U.S. submarine forces, Vice Adm. William J. Houston.

The documents described the inner workings of a state-of-the-art attack submarine that costs about $3 billion to produce. Jonathan Toebbe had worked for almost a decade on the Navy’s nuclear-propulsion technology, which enables the submarines to remain underwater for longer periods and to move more stealthily, according to court filings.

U.S. District Judge Gina M. Groh called the Toebbes “confessed traitors” who committed “horrible acts against this nation.” Groh said the Maryland couple’s crime was one of the most serious she had seen in her courtroom, with “potential for harm to U.S. soldiers, the military, civilians.” Though Jonathan Toebbe’s position gave him access to the sensitive data, Diana Tobbe’s sentence was longer because the judge found that she obstructed justice and was not entitled to a reduction in her prison term for accepting responsibility.

“The harm to this nation is grave, and these are scary times we live in,” the judge said at a sentencing hearing Wednesday in Martinsburg, W.Va., federal court.

Prosecutors said Jonathan Toebbe, 44, collected tens of thousands of dollars in cryptocurrency payments for initial data drops to the undercover FBI agents, and at one point offered to hand over 51 packages of information he said he had “smuggled” past security checkpoints. His price: $5 million paid in cryptocurrency, according to an October 2021 indictment.

Diana Toebbe, 46, admitted she acted as a lookout at three “dead drops” in which her husband left behind data cards at prearranged locations — concealing them inside a pack of gum, an adhesive-bandage wrapper and half of a peanut butter sandwich.

At one dead drop, the indictment says, Jonathan Toebbe left behind a message that he and his accomplice were prepared to flee the United States: “We have cash and passports set aside.”

Defense lawyers said the Toebbes, who have two sons ages 12 and 16, were seeking to leave the United States because they were opposed to then-President Donald Trump. An FBI search of their Annapolis home turned up passports for their children, thousands of dollars in cash, shredded documents and a “go bag” containing a flash drive and latex gloves.

“I believed that my family was in dire threat, that democracy itself was on the verge of collapse. And that sort of catastrophic thinking overwhelmed me,” Jonathan Toebbe said at the sentencing hearing. He described himself as an overworked family man who “self-medicated with alcohol” during a nervous breakdown that lasted more than a year.

“I failed in my responsibility to the American people to preserve the secrets that were entrusted with me,” he said.

Diana Toebbe told the judge she regretted her “catastrophic decision.”

“I should have followed my instinct and tried to talk my husband out of this plan, but then my family’s difficulties continued, my depression was at an all-time high, and I felt like the country’s political situation was dire,” she said. “I didn’t just fail to talk him out of it; I actually participated in helping him, and I wanted him to succeed. At the time, I absurdly thought it was a way out of these struggles.”

The Toebbes first pleaded guilty in February, but Groh threw out those agreements with prosecutors, calling them “woefully insufficient.” They would have required Jonathan Toebbe to be sentenced to 12½ to 17½ years in prison and Diana Toebbe to three years.

Groh sentenced Diana Toebbe to 21 years and 10 months in prison, enhancing her penalty because, according to the judge, she tried to communicate with her husband via handwritten letters she wrote from jail, urging him to plead guilty and deploy a cover story to authorities that she had nothing to do with the plan.

Prosecutors did not tell the court about the letters, which came to the attention of a probation officer assigned to the case on Oct. 4, Groh said. Prison officials had intercepted the letters, one of which was secreted in a laundry bag.

“This is an exceptional story. It’s kind of one right out of the movies,” Groh said of the Toebbes.

Prosecutors continued to request a three-year sentence for Diana Toebbe after the revised plea in September. Groh asked at Wednesday’s hearing how that would make sense, after she rejected an earlier agreement that called for three years of prison.

“The 36 months is a big part of why I did not accept the original binding plea,” the judge said, adding that Diana Toebbe seemed to be “driving the bus” in the couple’s attempt to sell military secrets.

Diana Toebbe’s lawyers argued that a sentence of three to nearly five years would be “consistent with, and in some cases greater than, sentences imposed for other accomplices” in similar cases. Assistant U.S. Attorney Jarod Douglas said “she is not the person with access” and was “simply a lookout on two or three occasions.”

“Her husband had an ill-conceived idea to make money, and she agreed to go along with it,” defense attorney Barry P. Beck said in an August court filing. At the sentencing hearing, Beck said Jonathan Toebbe instigated the plan and was the person with a government position that let him access the data.

“Mrs. Toebbe was a housewife, a teacher with a liberal arts degree, had no knowledge of what this stuff meant,” Beck said.

Prosecutors said Jonathan Toebbe was cooperating with the Department of the Navy and other authorities. His public defender, Nicholas J. Compton, said it showed Jonathan Toebbe did not hate the United States and accepted responsibility for his actions.

“Nobody was holding a gun to his head,” Compton added. “And whether Mrs. Toebbe was driving the train or not, he was the one who had access to the information.”

Compton said his client’s cooperation with authorities covered not only “the specific case that we are here about today, but . . . information that the government didn’t even know about.”

Jonathan Toebbe told the judge he had been debriefed by the FBI’s Behavioral Analysis Unit, to help the bureau develop better ways to identify “insider threats” in the government and “come up with a better profile for people like me, in hopes that they might be able to intervene sooner, and prevent the next threat from happening — not just for the protection of the country, but to save that lost soul.”

Groh sentenced Jonathan Toebbe to 19 years of 4 months in prison and said she did not believe he was trying to protect his family from Trump’s presidency.

“In a manner that reads like a crime novel or a movie script, the defendant abused his position of trust ... to threaten national security,” Groh said, adding that he “placed every citizen of this country in a vulnerable position.”