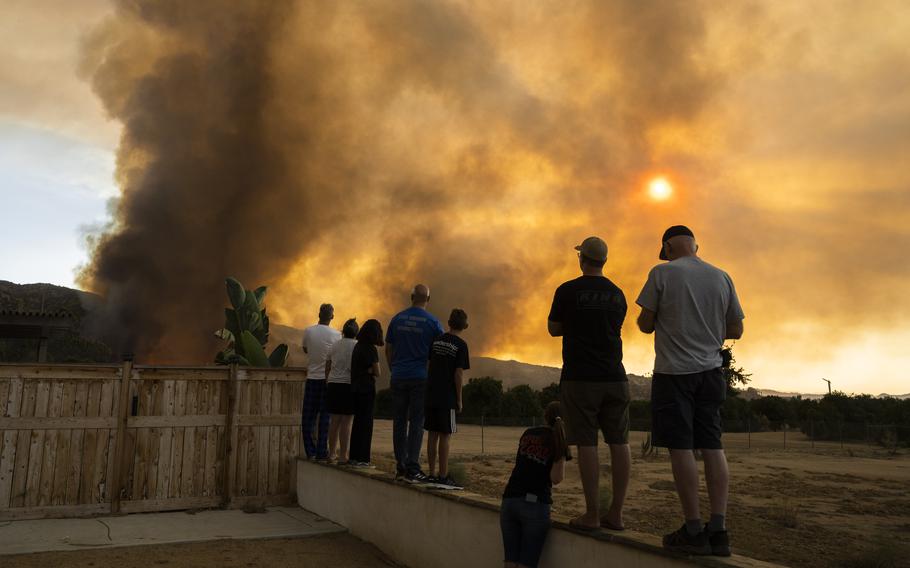 Climate change is unleashing "far-reaching and worsening" calamities in every region of the United States, and the economic and human toll will only increase unless humans move faster to slow the planet's warming, according to a sprawling new federal report released Monday.

"The things Americans value most are at risk," the National Climate Assessment authors, who represent a broad range of federal agencies, wrote in the draft report. "Many of the harmful impacts that people across the country are already experiencing will worsen as warming increases, and new risks will emerge."

The congressionally mandated assessment, last issued under the Trump administration in 2018, comes as world leaders gather this week in Egypt for a U.N. Climate Change Conference, known as COP27, aimed at prodding nations to tackle the problem with more urgency.

The report's authors detail how climate-fueled disasters are becoming more costly and more common, and how the science is more clear than ever that rapid cuts in greenhouse gas emissions are needed to slow the profound changes that are underway.

The draft report, which probably will be finalized next year after a period of public comment and peer review, finds that in a world that has already warmed 2 degrees Fahrenheit above preindustrial levels, the situation in the United States is even more extreme.

"Over the past 50 years, the U.S. has warmed 68 percent faster than the planet as a whole," the report finds, noting that the change reflects a broader global pattern in which land areas warm faster than the ocean, and higher latitudes warm more rapidly than lower latitudes.

Since 1970, the authors state, the continental United States has experienced 2.5 degrees Fahrenheit of warming, well above the average for the planet. 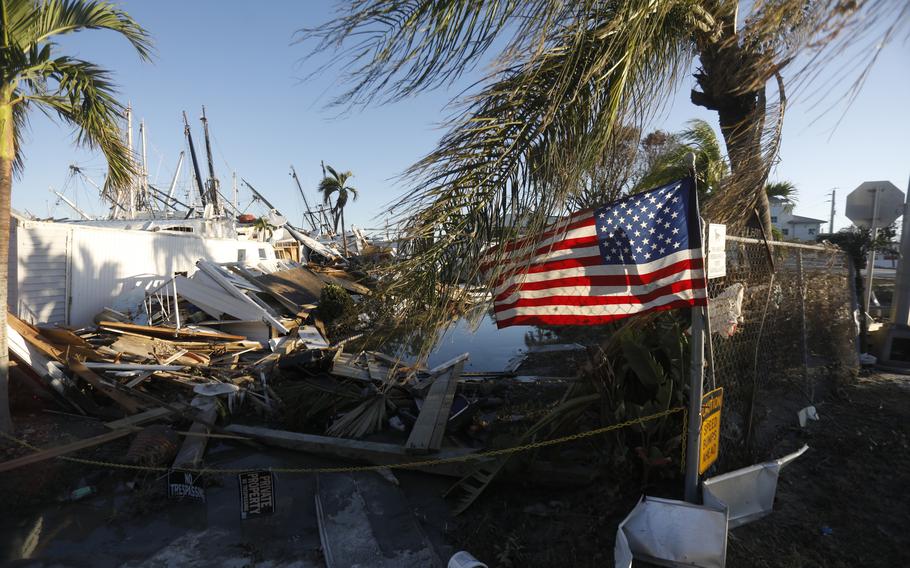 "The United States — exclusive of Alaska — is warming about two-thirds faster than the planet as a whole," said Zeke Hausfather, a research scientist at Berkeley Earth.

That shift means significant parts of the country now must grapple with growing threats to safe drinking water, housing security and infrastructure. A hotter atmosphere creates a litany of health hazards, makes farming and fishing more difficult and unpredictable, and imperils key ecosystems.

"There is no known precedent for a species changing its own climate as quickly as we are changing ours, and there are many uncertainties associated with a rapidly warming world," the document states.

Scientists have documented with increased clarity how human-caused emissions are heating the planet. But Monday's assessment underscores how those changes are deepening impacts on the health and pocketbooks of average Americans.

John Podesta, senior adviser to President Joe Biden on climate change, said the report "underscores that Americans in every region of the country and every sector of the economy face real and sobering climate impacts."

The study highlights how the frequency of billion-dollar disasters has now increased from once every four months in the 1980s to once every three weeks in the present. It finds that the United States is experiencing some of the most severe sea-level rise on the planet.

And it details the ever greater certainty that rainfall and heat extremes are proliferating, as are damaging wildfires and crippling floods.

"Substantively, I think the report does a remarkably good job of connecting the dots between climate change and the things that really matter to folks," said Kim Cobb, a climate scientist at Brown University. "The economy, jobs, justice. These things are what people need to be reading about to be understanding how these physical impacts are going to change our lives."

In the short term, the assessment finds, communities must do more to adapt to the changes that already are here — and some are doing just that. But over the long term, the only real solution is for humanity to muster the political and technological will to stop polluting the atmosphere.

"We're past the point of incremental changes," Cobb said. "That era has passed us by, and the magnitude of the challenges we're facing right now going forward are going to require transformative changes."

Below are some central takeaways from Monday's report, including what scientists say must happen for the United States to help shape a less costly, more livable future. 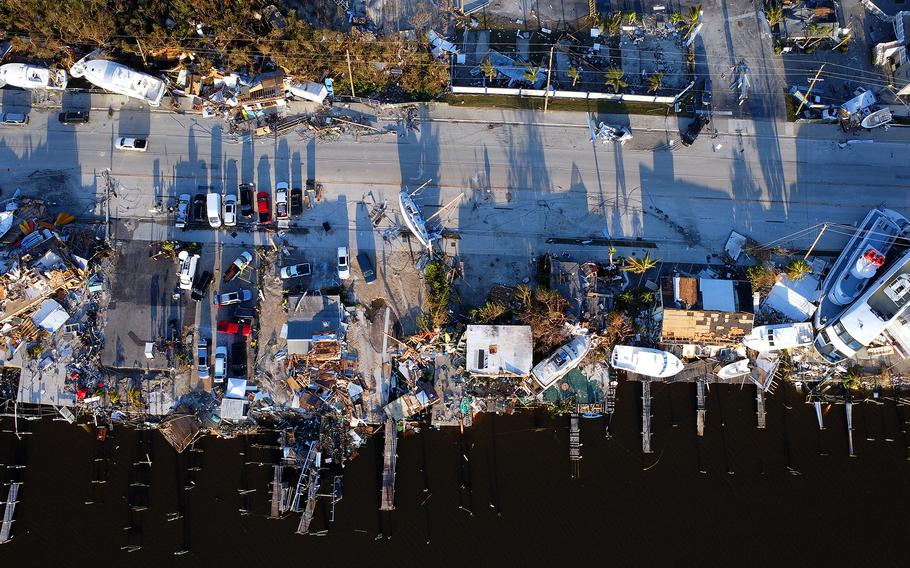 1. Every part of the U.S. is grappling with climate change — but not equally

From stifling heat waves in the Midwest to deadly floods in the Southeast, from warming oceans along the Northeast coast to raging wildfires in the West, "people across the country are facing increasing risks from climate change," the assessment finds.

Further, given the warming that is already unavoidable, those kinds of catastrophes are likely to grow in coming years even if greenhouse gas emissions fall sharply.

But the impacts of such disasters are hardly uniform. If anything, they exacerbate inequality.

"The effects of climate change are felt most strongly by communities that are already overburdened, including Indigenous peoples, people of color and low-income communities," the report finds. "These frontline communities experience harmful climate impacts first and worst, yet are often the least responsible for the greenhouse gas emissions that cause climate change."

The government's assessment argues that even amid more extreme rainfall and flooding events in many regions, there will be less reliable drinking water for millions of people.

That's because saltwater is invading aquifers as seas rise, floods spread agricultural nutrients that pollute wells and other sources of drinking water, and lakes face a growing threat of harmful algal blooms.

While some areas struggle with deluges, others are stricken by drought.

Between 1980 and 2021, the report finds, drought and related heat waves around the country caused nearly $300 billion in damages. In recent years, droughts have caused water supplies to wither, reduced agricultural productivity and severely reduced water levels in major reservoirs.

"What the climate assessment does is that it brings it home and talks about what is already happening today and how climate change is making our food, water and infrastructure worse," said Katharine Hayhoe, chief scientist of the Nature Conservancy and a professor at Texas Tech University.

"Droughts are projected to increase in intensity, duration and frequency, mostly in the Southwest, with implications for surface water and groundwater supplies," the authors write.

3. Extreme events are wreaking havoc on homes and property

As climate research has advanced, the connection between persistent warming and damaging real-world impacts has become clearer. Monday's report details how a number of costly, deadly disasters are attributable at least in part to human-caused warming, including Hurricane Harvey in 2017 and a June 2021 Pacific Northwest heat wave that killed 229 people.

The authors also detail how the nation has experienced more frequent billion-dollar weather and climate disasters. In 2021, the U.S. government tracked 20 such disasters — a collection of calamities that cost the nation an estimated $145 billion and killed nearly 700 people.

The United States has experienced an average of 7.7 billion-dollar disasters annually over the past four decades. But in the past five years, that average has jumped to nearly 18 events each year, or about one every several weeks.

Those disasters also don't hit all Americans the same.

Homes with poor insulation or inefficient cooling can make it harder for low-income residents to heat or cool their homes. Redlining policies that long ago forced minority residents into less valuable neighborhoods now mean such communities are less likely to have adequate tree cover or access to green space.

These and other factors mean that a hotter climate and the extreme weather it fuels most negatively impact those who are least able to deal with the consequences.

4. The U.S. can expect more forced migration and displacement

Already, the authors of Monday's report said, major storms such as Hurricane Maria, as well as extended droughts that strained lives and livelihoods, have led people to leave their homes in search of more stable places.

In the hotter world that lies ahead, they write, additional climate impacts —along with other factors such as the housing market, job trends and pandemics — are expected to increasingly influence migration patterns.

"More severe wildfires in California, sea level rise in Florida, and more frequent flooding in Texas are expected to displace millions of people, while climate-driven economic changes abroad continue to increase the rate of emigration to the United States," the report finds.

Such shifts are inherently complicated and fraught.

Several Indigenous tribes in coastal regions, facing fast-rising seas, have already sought government help to relocate, but have struggled to do so without significant hurdles.

From vampire bats spreading more rabies in Texas and Florida, to the growing spread of Lyme disease because of the booming tick populations, to more spreading of dengue, Zika, and chikungunya disease by mosquitoes, the human health impacts of climate change are sweeping.

Monday's report said scientists have "very high confidence" that "climate-related hazards will continue to grow, increasing morbidity and mortality across all regions of the United States."

More extreme heat events, more communities forced to inhale toxic wildfire smoke, warmer temperatures that increase the transmission of diseases and other factors are exposing ever more Americans to the health risks posed by a warming atmosphere.

But it also finds sharply reducing greenhouse gas emissions "would result in widespread health benefits and avoided death or illness that far outweigh the costs."

6. It's not just humans who are feeling the effects

Across the United States, the authors wrote, rising land and water temperatures are shrinking the habitats for wildlife and driving the migration of plant, bird and fish species northward or to higher elevations.

"Ecosystems are having to adapt faster by an order of magnitude faster than they did in the last warming they experienced," Hayhoe said, and that's affecting the timing of when plants bloom and when their leaves are changing.

These biodiversity threats, too, could grow more dire without concerted action.

"Without emissions reductions, drastic changes to ecosystems are expected to pass a tipping point by mid- to late century," the authors wrote, "where rapid shifts in environmental conditions lead to irreversible ecological transformations."

7. There is good news and opportunity to still shape the future

"Once we get global emissions to zero or net zero we expect warming to stop," he said. "It doesn't mean it cools down but that we don't have as much."

He cautioned, however, that "some climate change impacts — like sea-level rise — will continue for millennia to come even after temperatures stabilize."

The assessment also shows how innovation is reducing greenhouse gases and how adaptation is helping communities gird themselves for rising sea levels.

"Fifteen years ago, it was really hard to find examples of people who were actually adapting and building resilience," Hayhoe said. "But today it is happening all around us."

Near-term actions such as ramping up public transit and incentivizing electric vehicles and energy efficiency can have tangible benefits. But, the authors wrote, it is long-term planning and transformational investments that offer "the opportunity to create a healthier, more just, and more resilient nation."