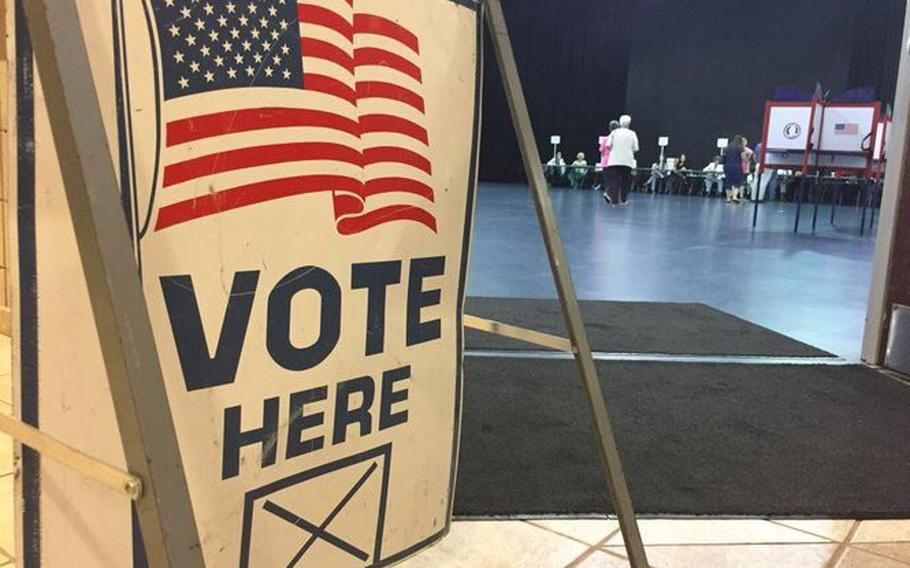 “We’re not looking at single narratives or false claims here and there or that happen to go viral,” said Cindy Otis, a former technology executive and CIA analyst who now researches disinformation. “We’re looking at entire social media platforms, independent news commentary websites and social media influencers who are starting from a place of ‘Elections are rigged against conservatives’ and covering the election from there.” (Wikicommons)

Misleading videos, recirculated months after they were shot, carried unfounded claims that Republican voters were being barred from the polls.

And users on the pro-Trump extremist forum The Donald urged armed intervention at ballot counting centers in Georgia, advising, “If it gets violent, shoot first.”

Myths built up over the past two years cohered into a torrent of misinformation on Tuesday as political movements bent on denying the facts took advantage of an alternative online ecosystem where all unfavorable election outcomes are suspect.

The paranoia and preemptive effort to discredit the results of the midterm elections found perhaps clearest expression in a headline on a website devoted to disseminating conspiracy theories about the pro-Trump siege of the U.S. Capitol on Jan. 6, 2021, an attack propelled in large part by online misinformation. “Expect the steal,” the website warned.

That expectation was no longer a fringe view, but political doctrine for whole swaths of the country.

“We’re not looking at single narratives or false claims here and there or that happen to go viral,” said Cindy Otis, a former technology executive and CIA analyst who now researches disinformation. “We’re looking at entire social media platforms, independent news commentary websites and social media influencers who are starting from a place of ‘Elections are rigged against conservatives’ and covering the election from there.”

In some instances, the online conversation included calls for violence.

The encouragement to storm counting sites in Georgia came in response to news that the mail-in ballot deadline had been extended for some voters in Cobb County following a logistical hiccup, according to the SITE Intelligence Group, which tracks online extremists. On The Donald, where much of the planning for the Jan. 6 Capitol siege took place, some posters called on supporters in Georgia to “be ready to lock and load” around election offices in case of “shenanigans.”

One user responded, “I hope for your sake, you’re willing to follow through and not go back. Because there will be no second chances soon.” Wrote another, “We are not doing this s--- again!”

Problems with machines at some voting locations in Maricopa County, home to more than half of Arizona’s voters, became grist for prominent right-wing voices who deny the legitimacy of the 2020 election to claim without evidence that Tuesday’s vote was also fraudulent. County officials stressed that no one was being prevented from voting and that no one’s ballot had been mishandled.

Those preemptively suggesting something nefarious was occurring included Blake Masters, Arizona’s Republican nominee for U.S. Senate. Masters, who is vying to unseat Sen. Mark Kelly (D-Ariz.), was the most prominent candidate to amplify the suspicions, painting incidents of mechanical errors as part of a Democratic ploy. “Hard to know if we’re seeing incompetence or something worse,” he wrote. “All we know right now is that the Democrats are hoping you will get discouraged and go home.”

Efforts by election officials to set expectations about the time it will take to count ballots also fueled right-wing conspiracy theories.

On the former president’s Twitter clone, Truth Social, his son, Donald Trump Jr., posted a collage of news headlines explaining that it’s normal for vote counts to last through the night and said, “Vote to overwhelm this bulls---.”

The tabulation process from 2020 — and the “red mirage” of early votes suggesting a Republican victory, only for following ballots to shift toward Democrats — has become a fixture of right-wing suspicion, even though delays in the counting of mail-in and other ballots are largely the result of decisions in Republican states not to count mail-in ballots before Election Day.

The anticipated delay in ballot counting, especially in tight races, could lead to “an extended period of uncertainty” likely to incubate rumors, said Kate Starbird, an associate professor at the University of Washington who researches online disinformation. Because of sustained attacks on election administration, she added, “the pump is already primed” for voters to believe such rumors.

After initially declining to take action against a wave of assertions that a multiple-day count would allow Democrats to cheat, Twitter applied informational boxes to some of the most popular posts. “Democrats are saying it could take days and weeks to count the mail-in ballots,” wrote one right-wing commentator, gaining thousands of engagements, meaning retweets or likes. “It sounds like they need time to cheat.”

The social media platforms were split Tuesday in their approach to moderating identical content spreading online.

Meta, the parent company of Facebook and Instagram, declined to remove or add context to a misleading video, captured during the Texas primary in March, that’s now recirculating on its platforms with unfounded claims of suppressed GOP votes in Tuesday’s elections.

The video captured a poll worker appearing to tell Republicans they could not vote because of staffing shortages. The parties were responsible for recruiting election judges, who had to be on-site for balloting to take place.

An Instagram account operated by a news agency that says it caters to Jewish readers reposted the video with no context about the time or location of the alleged problems. When the watchdog group Common Cause flagged the video to Meta, the company responded that the content did not violate its policies, according to communications reviewed by The Washington Post. A Meta spokesman did not respond to a request for comment about the video, which had achieved minimal engagement on the platform.

Twitter made a different decision about the same video, applying a label informing users that the content “is presented out of context.” Still, one of the posts sharing the misleading claims gained more than 5,000 retweets.