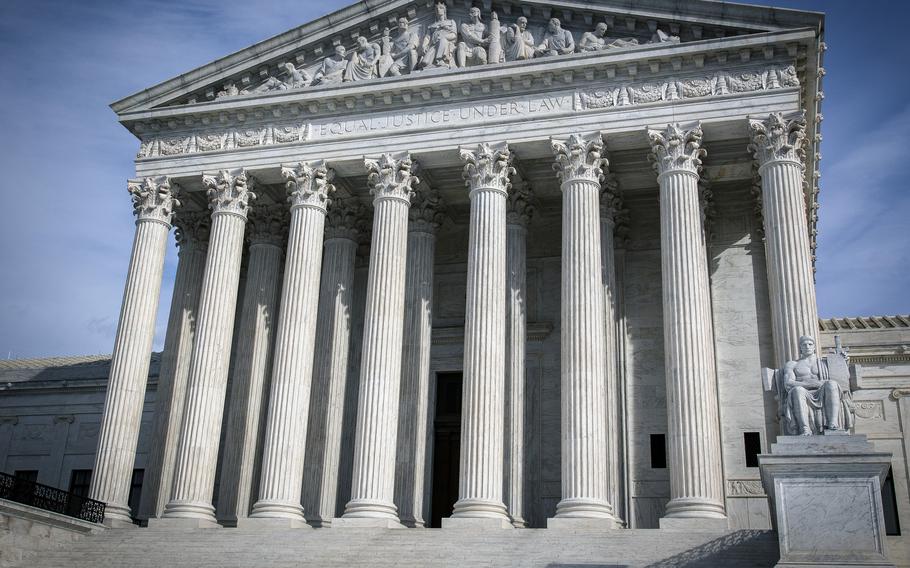 Conservative Supreme Court justices indicated on November 7, 2022, that they are ready to ease the process of challenging the regulatory power of federal agencies, hearing arguments in two cases that could diminish the authority of the Securities and Exchange Commission and the Federal Trade Commission, respectively. (Ashley Goodwin/U.S. Army National Guard)

Conservative Supreme Court justices indicated Monday that they are ready to ease the process of challenging the regulatory power of federal agencies, hearing arguments in two cases that could diminish the authority of the Securities and Exchange Commission and the Federal Trade Commission, respectively.

The issue in both cases seems mundane: whether someone singled out for enforcement action by either agency can go directly to federal court to make challenges about the constitutionality of the process. In both cases, the plaintiffs are challenging whether in-house administrative law judges used by the agencies are not appointed in ways that square with the Constitution. They don't want to wait for final agency action to begin their challenges.

But the bigger issue is a battle by business interests to weaken the federal administrative state, and the plaintiffs hope to build on a string of Supreme Court decisions that have advanced that cause. The importance of the issue was underscored by amicus briefs by industry groups and the fact that two former Republican solicitors general were arguing the cases against the government.

Paul D. Clement represented the body-camera equipment firm Axon, which came under FTC scrutiny when it bought a rival, and Gregory G. Garre was the lawyer for accountant Michelle Cochran, who was accused by the SEC of violating auditing standards.

Both lawyers were solicitors general under President George W. Bush.

They told the justices that their clients should not have to undergo years of litigation before being able to challenge the constitutionality of the administrative law judges and, thus, the agencies' enforcement actions themselves.

"The SEC acts as prosecutor, judge and, in effect, executioner in its own proceedings, all of which give it an extraordinary home court advantage," Garre said. Because the in-house judges are too far removed from control of the president, he argued, they suffer a "blatant constitutional defect."

Those targeted by the agencies should not have to wait for final agency action to challenge that, Garre said.

Justice Department lawyer Malcolm L. Stewart countered that Congress authorized review of the relevant agency actions by courts of appeals only after those actions became final. In doing do, Congress was making "clear that district courts have no authority to entertain constitutional challenges to . . . agency adjudications," Stewart said.

But Chief Justice John G. Roberts Jr., who wrote one of the previous decisions that has raised questions about agency authority, said there was a "constellation" of similar cases that "make the case about the need for direct resolution of a related claim pretty strong."

In the FTC case, Justice Samuel A. Alito Jr. said, the status of administrative law judges "hangs over everything the agency is doing. Isn't it in your interest to get this decided?" he asked Stewart.

Alito indicated that since the Supreme Court would have the final word on the constitutionality of the process, the sooner the better.

Clement agreed in the FTC argument. "The government says, look, it's every citizen's burden to have to go through these administrative processes before you get judicial review," he said. "I don't think that's right if the administrative agency is alleged to be unconstitutional . . . . That should not be the burden of citizenship."

But liberal Justices Sonia Sotomayor and Elena Kagan noted that in many other aspects of the law, a final decision was required before challenging the action.

Kagan noted that the court is "pretty stingy" about allowing intermediate challenges. "So what makes yours different?" she asked.

Also on Monday, Justice Ketanji Brown Jackson filed her first opinion as a justice, dissenting from her colleagues' decision to not review an Ohio death-row inmate's claim.

Jackson said the U.S. Court of Appeals for the 6th Circuit used the wrong standard to rule against Davel Chinn, who was convicted of a 1989 murder in Dayton. Chinn's lawyers said prosecutors had withheld evidence that a key witness against Chinn had an intellectual disability that may have affected his ability to "remember, perceive fact from fiction, and testify accurately," Jackson wrote.

The 6th Circuit said Chinn had not shown that the evidence would have more likely than not affected the outcome of Chinn's trial. But Jackson, joined by Justice Sonia Sotomayor, said that standard was higher than one recognized in Supreme Court precedents.

"Because Chinn's life is on the line, and given the substantial likelihood that the suppressed records would have changed the outcome at trial . . . I would summarily reverse to ensure that the Sixth Circuit conducts its materiality analysis under the proper standard," Jackson wrote.

The case is Chinn v. Shoop.