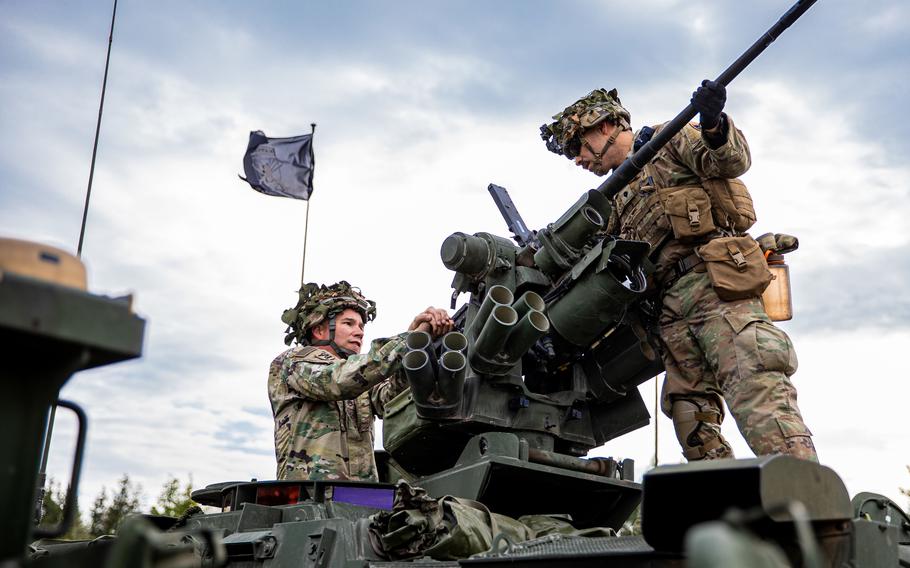 Soldiers weighed and packed their gear Thursday and received final pieces of advice from commanding officers. Members of the community were there as well to give them handmade keychains as reminders of home.

Approximately 160 troops from the 1133rd Transportation Company, headquartered in Mason City, will deploy to Poland in support of "Operation European Assure, Deter and Reinforce." The unit is expected to be gone for about a year.

The mission is part of the United States' commitment to the international order and the security of our NATO allies. The 1133rd will transport equipment and supplies in support of U.S. and NATO forces.

The 1133rd leaves today for its mobilization station at Fort Hood, Texas, to complete final training and readiness checks before deploying overseas.

In late September, the transportation company conducted a railway operation in Manly to prepare for deployment, loading railroad cars with the equipment it will need in Europe. It was one of the largest railroad operations in 20 years.

A send-off ceremony will be held for the local Iowa National Guard company at 9 a.m. today at the North Iowa Events Center in the All Seasons Building.

For some soldiers, it is their first time being deployed.

"A month ago, I was doing fine and everything. [I'm] a little nervous now, and I'm just anxious leaving my family and Iowa itself," said Sgt. Madison Dutka.

Others have deployment experience.

"The first one I was 22, young, stupid, and didn't know anything. This time I'm going to be celebrating my 37th birthday in Poland," said Sgt. Matt Platts.

Many of the soldiers received the news that they were being deployed around the Thanksgiving season. Loved ones were supportive, but there were feelings of sadness as well.

"They always knew I wanted to deploy. That was my No. 1 goal in the military. They knew that I was very excited, so they were supportive in that," said Dutka.

"Originally, they weren't too excited just because I'm in college and I'm actually a senior, so I was supposed to graduate this year. They were like, 'You should just stay in college and try not to go.' I really feel like it's a once in a lifetime," said Specialist Bryson Hervol, who is a part of 1168th Transportation Company, attached to the 1133rd.

"When we found out it was Poland, there was a lot less stress and worry because it's a noncombat deployment as of right now, and it should stay that way," said Platts.

Each soldier has made the most of their time leading up to the deployment, spending much of it with their families.

"I made sure I went to every sort of family gathering that my family had," Widdel said.

"I just kind of touch base with a lot of friends and family," said Hervol.

Dutka, a Nora Springs native, and her family took the time to celebrate the holidays in advance. She explained that all of her family members have figured out ways to communicate with her while she's deployed.

"My grandma gave me all my cards for Thanksgiving, Christmas, all of them," Dutka said with a smile. "[We've] just been coming together for some of those holidays a little bit beforehand and final goodbyes."

Mason City native Platts, who is married and has two children, has been enjoying his time with his family. He even had his work hours shortened to make sure he had more time to share. Both of his children are active with sports and other activities.

"It's hard to be away from the kids, and the most I've ever been away from my boys was six weeks. So a whole year is going to be hard for me," Platts said.

Some soldiers made a point of eating at their favorite diners and dives before deployment. Widdel, who is from Reinbeck, and Hervol, a Waverly native, made sure to hit some favorite spots.

"In Ames, there's so many restaurants that I hadn't tried or even gone to. I just was kind of going out a little more than I normally would," said Hervol.

Hervol is a senior economics major at Iowa State University and said his professors were understanding about him being deployed. He will be taking a few online courses — mainly electives and easier classes — while he is away. Hervol said his professors have been accommodating to his situation and told him to submit assignments when he can.

"I had to take economic metrics, which was very math-based. I'll just hold off on that till I get back," said Hervol.

All members of the 1133rd have established ways to communicate with their families. Some are using phones and video-call services to stay connected. Others are using mail services.

"We discussed WhatsApp. We're going to try that as long as I have service. If not, I told them I would send them a letter to notify them that I won't be able to have my phone," said Dutka.

"I feel like with technology, it's so easy to stay in touch," said Hervol.

The soldiers were appreciative of the support they have received from the community and their families.

"It's not us you have to worry about, it's the families at home. They're the ones hurting," said Platts.