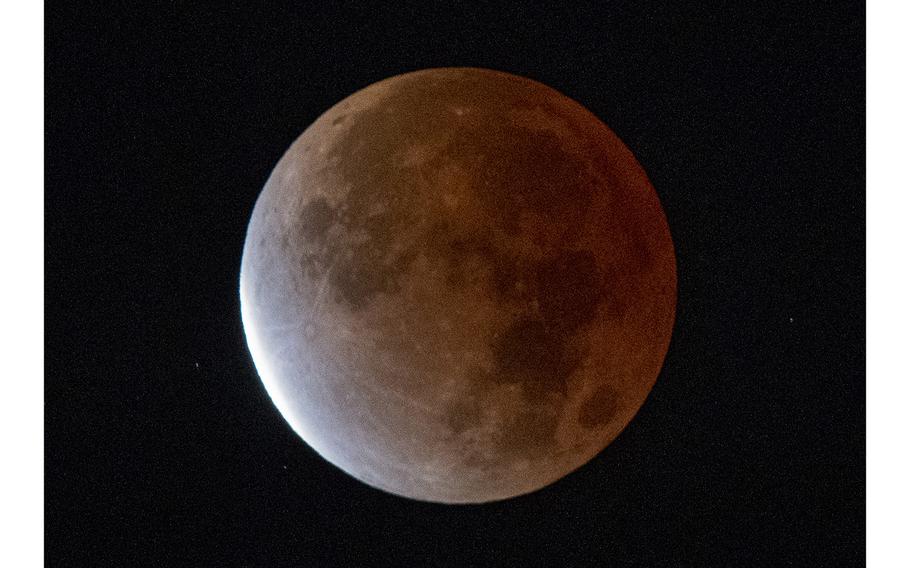 Hours before citizens across the country cast their votes in a contentious midterm election, a sinister red moon will loom in the sky. The last total lunar eclipse of 2022 is set to stain the moon red during the wee hours of Tuesday morning. Residents across both coasts will be able to watch the spectacle for just under 90 minutes.

Total lunar eclipses, commonly known as "blood moons," only happen during full moons when the Earth completely shields the moon from the sun. Once the sun, earth and the moon are exactly aligned, light from simultaneous sunrises and sunsets around the earth project onto the moon, briefly causing a coppery-red coat on the moon's surface. The more dust or clouds in the Earth's atmosphere during the eclipse, the redder the moon will appear, according to NASA.

From the moon, the total lunar eclipse would shine a bright red aura around the Earth's dark surface.

"It's a wonderful reminder of this really special connection between the Earth, the moon and the sun," said Noah Petro, a scientist with the Lunar Reconnaissance Orbiter Project at NASA.

The entire moon will illuminate coppery-red from 5:17 a.m. until 6:42 a.m. Eastern time. But moon fanatics can wake up at 3:02 a.m. to watch the moon enter the outer part of the Earth's shadow, called a "penumbral" lunar eclipse; this will cause the moon to lightly dim. The partial eclipse, which will look like a bite was taken out of the moon's surface, is slated to start at 4:09 a.m.

Everyone on the night side of the Earth will be able to see the eclipse. Viewers on the West Coast will be able to watch the entire lunar eclipse without disruptions because it will occur in the middle of the night. Residents on the East Coast will be watching the copper moon sink into the horizon due to early sunrise times. Hawaii is the "absolute ideal location" to watch the eclipse, Petro said.

"Any place, effectively west of the central part of the country is in a little bit more of a prime location," Petro said. "Like real estate it's all about location."

The first lunar eclipse of the year bathed the moon in a rusty bronze cloak last May. Those in California and the Pacific Northwest were only able to watch the second half of the eclipse.

In any given year there can be a minimum of two lunar eclipses and a maximum of four, Geoff Chester, an astronomer and public affairs officer at the U.S. Naval Observatory, told The Washington Post. If there are two in one year, both tend to be total lunar eclipses.

"Twice a year, somebody somewhere on the planet will see a total lunar eclipse if it's a year where we have two eclipses," Chester said.

Unlike the blinding effect of solar eclipses, special equipment is not needed to see the reddish hues, but observing in a dark environment away from bright lights makes for the best viewing, according to NASA.

Astronomers can determine total lunar eclipses years in advance due to their knowledge of the moon's orbital patterns.

"It all comes down to knowing the orbit of the moon very exactly where we can predict down to the minute an eclipse of the sun and moon," Petro told The Post.

Even though scientists can predict the exact time when the different phases of the eclipse will take place, there is one thing they cannot predict: its color. The shade of total lunar eclipses varies from eclipse to eclipse ranging from a coppery gold to a deep red.

"We just don't know from eclipse to eclipse exactly [what color] we're going to get at the time of totality. And that adds an element of fun to it," Chester said.

"Every eclipse is special because they're all wonderful opportunities to go out and look at the moon, our nearest neighbor in space," Petro said.