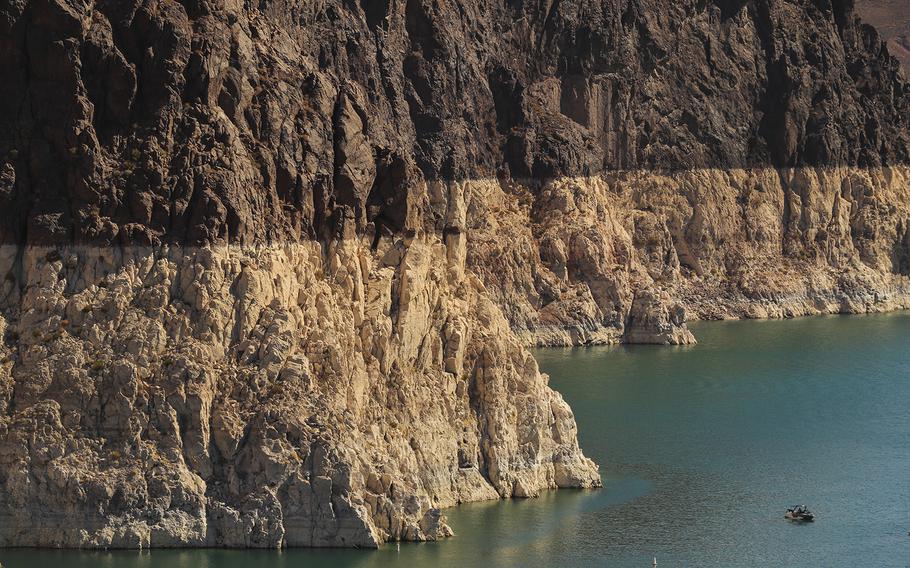 A boater gets an up-close view of the “bathtub ring” on Lake Mead — evidence of its low water level — while touring Hoover Dam. (Allen J. Schaben/Los Angeles Times/TNS)

WASHINGTON (Tribune News Service) — With California and the Southwest facing a historic drought, the Supreme Court agreed Friday to review a 9th Circuit Court decision that held the Navajo Nation has a right to take more water from the Colorado River.

The appeals court had pointed to the 1868 treaty that gave the Navajos a "permanent home" on their reservation, and it ruled the treaty "necessarily implied rights" to an adequate amount of water to live and farm.

"It is clear that the reservation cannot exist as a viable homeland for the Nation without an adequate water supply," wrote Judge Ronald Gould, yet "many homes on the reservation lack running water."

Based on the treaty, the Navajos are entitled to bring "a breach of trust claim" against the United States and the Department of the Interior, he said. As party to the treaty, the federal agencies "have an irreversible and dramatically important trust duty requiring them to ensure adequate water for the health and safety of the Navajo Nation's inhabitants in their permanent home reservation."

Both the Biden administration and the state of Arizona asked the justices to review and overturn the appeals court decision, and they were joined by other water authorities, including the Metropolitan Water District of Southern California.

Lawyers for Arizona said the 9th Circuit's ruling "immediately threatens the security of existing entitlements" to water from the Colorado River. This water "is already fully allocated and is experiencing a mega drought accompanied by drastically depleted storage in Lake Mead."

They also said the ruling, if allowed to stand, could give other tribes the same right to more water.

The state's lawyers said the 9th Circuit Court should have steered clear of the issue entirely because the Supreme Court itself has for decades overseen the allocation of water from the Colorado River in the case of Arizona v. California.

Solicitor General Elizabeth B. Prelogar, representing the Interior Department, told the justices that the 9th Circuit's decision was clearly wrong and should be overturned. She said the 1868 treaty did not include specific guarantees involving water rights, and she noted the Navajo reservation was greatly expanded during the 20th century. The areas of Navajo land that now seek more water from the Colorado River were not part of the reservation in 1868, she said.