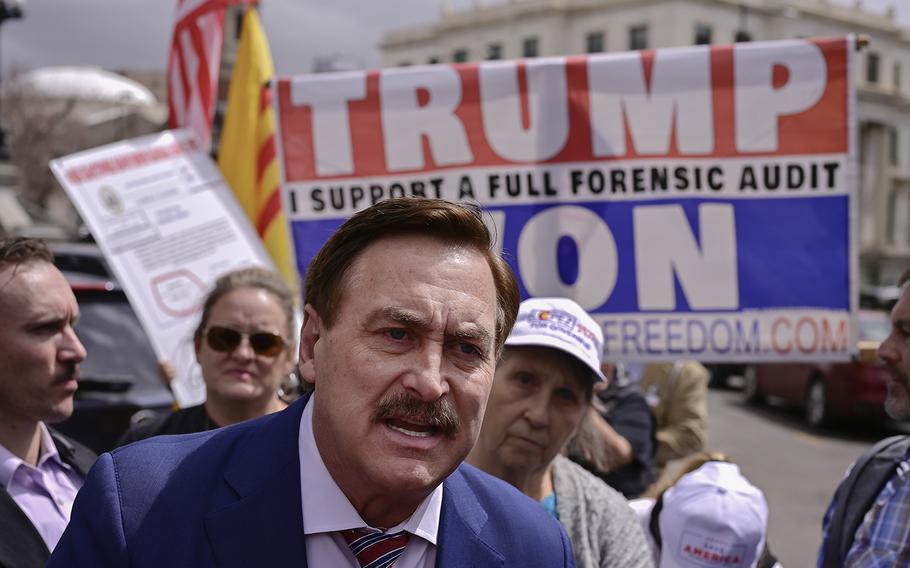 MyPillow CEO Mike Lindell at a rally at the Colorado Capitol in Denver on April 5, 2022. (Hyoung Chang/The Denver Post/TNS)

MINNEAPOLIS — A federal judge has rejected MyPillow CEO Mike Lindell's attempt to see the search warrant affidavit that set the stage for his cellphone to be seized by the FBI two months ago in Minnesota.

Lindell, among Donald Trump's leading voices backing the former president's claim that voter fraud in 2020 denied him reelection, sued Justice Department leaders in September in a bid to retrieve the cellphone that he said FBI agents took from him at a Hardee's drive-thru in Mankato.

The suit, filed in U.S. District Court in Minnesota, asked Judge Eric Tostrud to declare the Sept. 13 encounter with FBI agents a violation of his constitutional rights.

In a 36-page ruling Thursday, Tostrud said that "multiple factors here justify keeping the search warrant materials under seal. The extensive, 80-page search warrant affidavit describes in considerable detail the nature, scope and direction of the government's investigation and the individuals and specific activities involved, including information obtained from recorded communications, confidential informants, and cooperating witnesses."

The judge also said the FBI can retain possession of Lindell's cellphone, and he rebuffed possibly releasing a redacted version of the affidavit, calling that "impracticable."

Attorneys for Lindell did not respond to requests for comment about the rulings by Tostrud, a Trump appointee in 2018.

According to the suit, a federal magistrate judge on Sept. 7 authorized federal agents to seize Lindell's Apple iPhone "and to gain access to multiple categories of data collected on that cellphone." The suit alleges the agents tracked Lindell down using cell site location information or a tracking device without a warrant as he returned from an Iowa hunting trip on Sept. 13.

Lindell has told the Star Tribune that agents questioned him about Dominion Voting Systems and a Colorado clerk who has been charged in what prosecutors are calling a "deceptive scheme" to breach voting system technology used nationwide.

Lindell's complaint said he handed over the phone "under protest" after speaking with his lawyer. He said he runs Chanhassen-based MyPillow and "four affiliated businesses" off the seized phone. Without it, Lindell "has no ready access" to passwords needed for "essential computer programs, and financial transactions" through MyPillow bank accounts. Lindell added that the phone includes "attorney-client information."

Lindell and MyPillow are still being sued for $1.3 billion in a defamation lawsuit from Dominion Voter Systems and Smartmatic. Lindell and his company also filed suits of their own against the voting machine companies. All of that litigation is still pending.