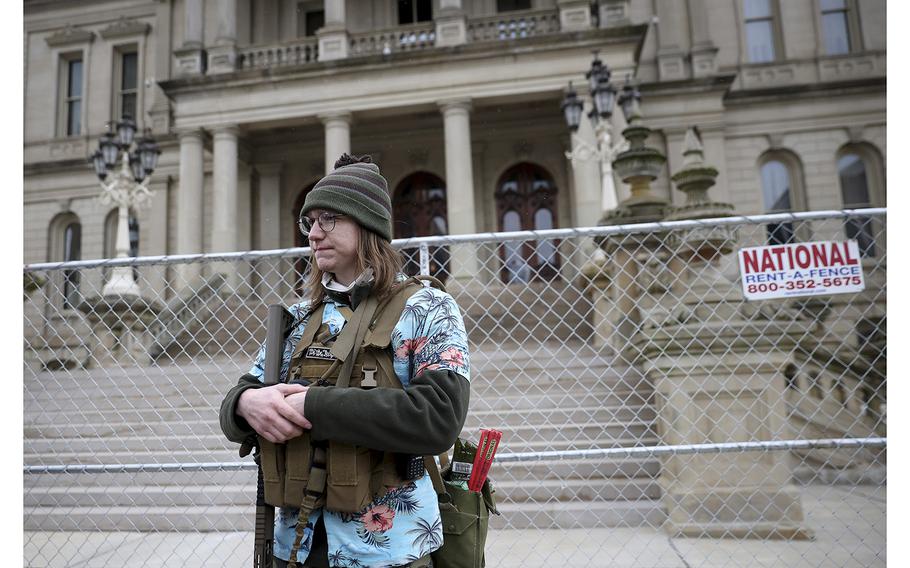 Boogaloo group member Timothy Teagan stands with a rifle at a protest outside the Michigan Capitol on Jan. 17, 2021, in Lansing. (Scott Olson/Getty Images/TNS)

DETROIT (Tribune News Service) — Federal court officials on Friday postponed a bond hearing for Timothy Teagan after the prominent member of the Boogaloo movement tested positive for COVID-19, according to court officials.

The diagnosis emerged during a brief court hearing Friday in federal court in Detroit, two days after the 24-year-old Plymouth resident was charged with drug and gun-related crimes following a counterterrorism investigation focused on concerns about attacks on politicians and plans to disrupt the Nov. 8 midterm elections.

Teagan, 24, is charged in a criminal case that portrays him as a heavily armed member of a group with a history of violence.

Teagan was supposed to be in court three days after being charged with federal gun and drug crimes amid concern that members of the anti-government group were plotting attacks on politicians and planning to disrupt the Nov. 8 midterm elections. The charges culminated a series of escalating legal problems that included a separate arrest in an assault case and the search of his home Oct. 27 by members of an FBI Joint Terrorism Task Force.

The criminal case against Teagan does not mention elections or plots involving the midterms. But the gun and drug charges could be a tool prosecutors are using to detain Teagan as the counterterrorism investigation continues, legal experts told The Detroit News.

Teagan is a high-profile, often-quoted member of the Boogaloo movement. The Boogaloo is a loosely organized movement of supporters who believe the country is broken and that a second Civil War is looming. Several members of the movement were part of the plot to kidnap Gov. Gretchen Whitmer and prosecutors said the plotters were motivated to spark a second Civil War.

Teagan has attended various protests, rallies and demonstrations in recent years, including the "People's Convoy," which opposed pandemic restrictions. He has been photographed carrying an AR-15 at various rallies and posing with several people charged in the kidnap plot, including Pete Musico, who was convicted last week, and Daniel Harris, who was acquitted earlier this year in federal court.

In January 2021, Teagan attended a protest at the state Capitol ahead of President Joe Biden's inauguration. Teagan was carrying an AR-15 rifle and wearing a Hawaiian shirt, the trademark clothing of members of the anti-government boogaloo movement.

Teagan's arrest Tuesday coincided with that of Aron McKillips, an alleged member of the Boogaloo Boys in Ohio. The 29-year-old Sandusky resident is accused of amassing weapons, including a grenade launcher and talking about burning down federal buildings along with killing federal agents and other government officials.

The criminal case against McKillips references Lansing. During a visit to Lansing in April 2021, McKillips is accused of providing devices to Boogaloo Boys that convert rifles into fully automatic machine guns.

The Michigan secretary of state's office has had "ongoing conversations" with the FBI, but no specific threats have been shared with the office, spokesman Jake Rollow said earlier this week.

Teagan was arrested Tuesday and prosecutors unsealed gun and drug-related charges that could send him to federal prison for up to 10 years.

The federal investigation started Oct. 25 after Plymouth Police notified FBI counterterrorism investigators that Teagan had been arrested for domestic violence.

"When officers arrived at the residence, they observed Timothy Teagan's father, Johnathan Teagan, covered in blood. He had been bitten on the forehead and repeatedly punched," an FBI agent who is part of the Joint Terrorism Task Force wrote in an affidavit.

Agents "were asking if I knew about any violent plans or any violent tendencies that could come forth about the election," Teagan told documentarian Ford Fischer in a recent interview. "They were asking what the boogs or any militias were planning during the elections, if we had any plans to go to polls armed."

Investigators learned Teagan had purchased a Glock pistol in July. On the gun form Teagan signed when he purchased the Glock, he denied being a drug user, according to the affidavit.

That statement and the drugs led to prosecutors charging him with being a drug user in possession of firearms and ammunition, and making a false statement in connection with acquiring a firearm.

In an email to The Detroit News on Wednesday, Teagan's lawyer Benton Martin noted Teagan "is presumed innocent" but declined additional comment ahead of Friday's detention hearing.

"I believe that possession of firearms is consistent with the ideology espoused by members of this movement," the agent wrote. "I am aware that Boogaloo ideology is an anti-government or anti-authority concept advocating the violent overthrow of government."