Biden, Trump and Obama converge on Pennsylvania for Senate race 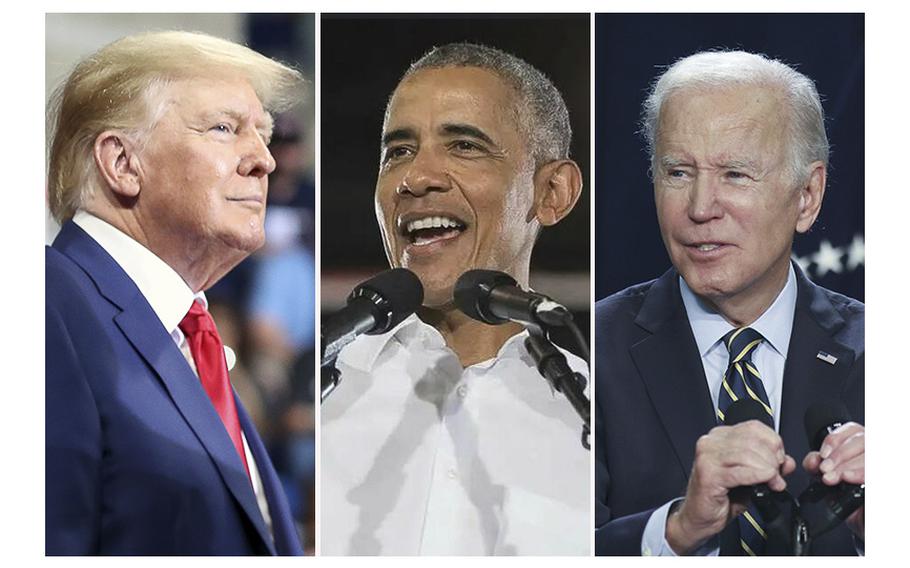 Former Presidents Donald Trump and Barack Obama as well as President Joe Biden were converging on Pennsylvania on Saturday, Nov. 5, 2022, in a last-ditch efforts to promote their favored candidates in the midterm elections. (TNS)

(Tribune News Service) — President Joe Biden, Barack Obama and Donald Trump are all converging on Pennsylvania in a last-ditch effort to close the deal on the midterm elections in a state that's a critical step on the path to the White House in 2024.

Obama campaigned in Pittsburgh on Saturday morning with John Fetterman, the Democratic Senate candidate, before a separate afternoon event in Philadelphia that Biden will attend. In the evening, Trump, who succeeded Obama and preceded Biden, has a rally planned to promote Mehmet Oz, the Republican Senate candidate, in Latrobe, some 45 miles southwest of Pittsburgh.

The hotly contested election to replace retiring Sen. Pat Toomey, a Republican, is one of a handful of toss-up races across the country, crucial to securing a Senate majority. Fetterman and Oz are neck-and-neck in the closing days of the campaign, with polls showing the television-doctor-turned-Senate-hopeful clawing back from a double-digit deficit as recently as August.

Nationwide, Republicans, including Oz, have shown signs of momentum as voter concerns about high inflation, the wobbly economy and crime, overwhelm angst over the U.S. Supreme Court's June ruling that rolled back federal abortion rights.

Obama said at the rally with Fetterman in Pittsburgh that Tuesday's election is a choice between Republicans who deny election results and complain about problems without real solutions and Democrats who will fight to make democracy work.

"Pennsylvania, you've got choice between politicians who seem willing to say and do anything to get power, and people who see you and know you and care about you and share your values, who want to make your life better," Obama said.

Obama mocked Oz peddling products on his former long-running "Dr. Oz Show," saying, "If somebody is willing to peddle snake oil to make a buck, then he's probably willing to sell snake oil to get elected. You deserve better."

Fetterman said while Oz will be standing on the stage with Trump, he was proud to be standing with a president who is "100% sedition-free" — a reference to Trump's efforts to overturn the 2020 election that he falsely says was stolen.

In his closing appearances, Oz is focusing on what he says is Democrats taking the country in the wrong direction on the economy and inflation, crime, and a porous southern U.S. border allowing the proliferation of illegal drugs such as fentanyl.

"Right now in America, we need to bring a sense of balance to Washington," Oz said at rally on Friday night in Wexford near Pittsburgh. "Washington's getting it wrong with all these radical ideas," he said.

Democratic and Republican political strategists alike said the rallies are unlikely to sway many voters this close to the Nov. 8 election, but they can help energize base voters to cast ballots and volunteer to help their party's nominee.

The 2022 midterm election cycle has been marked, in part, by how closely candidates associate themselves with Biden and Trump.

Polls show that Trump is unpopular with suburban women Oz needs to win statewide, and Republicans have tried to tie Fetterman to Biden because the president has only a 42% approval rating in the state. Doug Mastriano, the GOP nominee for governor, is also expected to appear at the Trump rally, and Fetterman has sought to link Oz with Mastriano, characterizing them as extremists.

"The thing about Pennsylvania, it's such a close state that small things can have big impacts," Democratic strategist Mike Mikus said. "Say it costs you 5,000, 10,000 votes. Well, in a state like Pennsylvania, that can be the difference in the race."

On Thursday, Fetterman received an endorsement from Oprah Winfrey. It was a particularly devastating blow to Oz, who got his start on television with regular appearances on her talk show, before starting his eponymous "Dr. Oz Show" that ran for nearly 13 years.

Trump, who is teasing he'll announce a third White House bid, possibly the week after the election, is also staging rallies on behalf of his endorsed candidates before Tuesday's elections in Florida and Ohio. He appeared on Thursday in Iowa.

The ex-president typically mentions the candidates briefly and has them speak, but he spends the bulk of his speech talking about himself, criticizing Biden and Democrats and winking at a possible 2024 comeback campaign.

Biden has appeared at fundraisers but has held fewer rallies than Trump or Obama during the midterm elections when they were in office. Obama, who remains popular in the Democratic Party, has been appearing at rallies for Democratic candidates in states including Arizona, Georgia and Michigan, excoriating GOP candidates as unqualified and extremists.

Pittsburgh, where he and Fetterman appeared Saturday morning, is in Allegheny County, a Democratic island bounded by Republican counties on all sides, including Westmoreland County, where Trump and Oz will appear Saturday evening. In 2020, Biden won Allegheny County by 20 percentage points. Trump carried Westmoreland by 28.

Philadelphia, where Biden, Obama and Fetterman will rally together in the afternoon, is Pennsylvania's most populous city and a Democratic bastion. Fetterman needs to run up votes there in order to counter any high turnout that Oz gets from the commonwealth's rural Republican strongholds.

But Obama's big rally for Hillary Clinton in Philadelphia in 2016 didn't help her defeat Trump in Pennsylvania, said Josh Novotney, a Pennsylvania-based GOP consultant who has worked for Toomey. Democrats also shouldn't count on Oz appearing with Trump hurting the celebrity physician, he said.

"If they're banking on that, I'd say 'good luck,'" Novotney said. "I don't think really either way it's going to hurt or help."