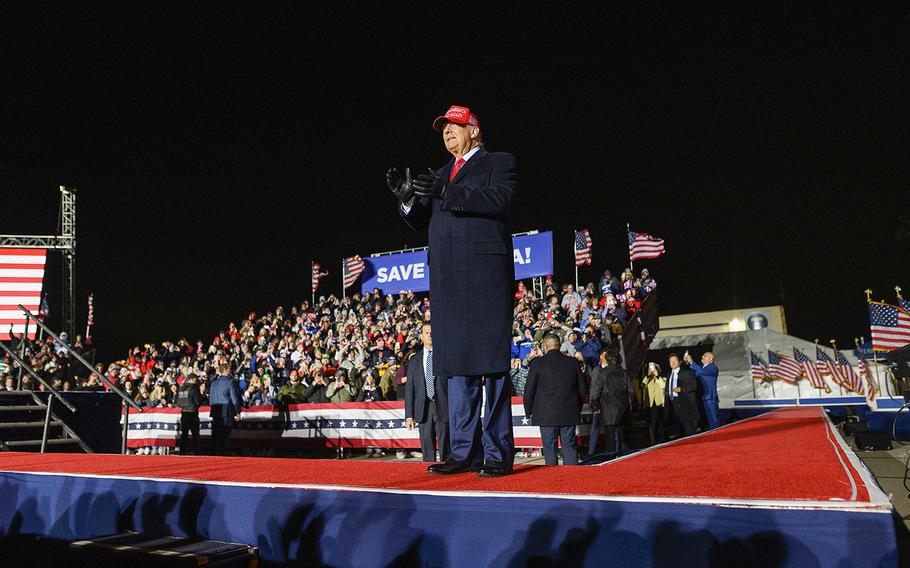 Former President Donald Trump arrives at a campaign event at Sioux Gateway Airport on Nov. 3, 2022, in Sioux City, Iowa. Trump held the rally to support for Iowa GOP candidates ahead of the state’s midterm election on Nov. 8. (Stephen Maturen/Getty Images/TNS))

WASHINGTON (Tribune News Service) — Donald Trump, still asserting he lost the presidency through fraud, is on the verge of announcing a comeback bid.

Without saying when, Trump declared at a rally Thursday night in Sioux City that "in order to make our country successful and safe and glorious, I will very, very, very, probably do it again."

Behind him, a huge banner read "Save America!" – reinforcing his message that the country has spiraled downward since he left the White House on Jan. 20, 2021, and that he represents the antidote.

Axios, The New York Times and other news organizations reported that Trump's announcement could come as soon as Nov. 14. Some GOP strategists hope he puts that off if the dead-heat Georgia Senate contest between Sen. Raphael Warnock and Trump's pick, former football star Herschel Walker, goes to goes to a runoff Dec. 6.

"Donald Trump's theory of the case is that he already did this job and he did it better than the current president," Kellyanne Conway, a Trump adviser, told reporters Thursday over breakfast hosted by the Christian Science Monitor. "Donald Trump has a better shot at being the Republican nominee for president than Joe Biden has at being the Democratic nominee."

Conway, who ran Trump's victorious 2016 campaign, said she urged him to put off launching a 2024 bid until after the midterms, though other confidants saw no reason to delay. She expects he will announce a 2024 campaign "soon," she said, adding, "I give him a ton of credit for not announcing this year, for not stepping in the way of the midterm candidates."

More Americans view him unfavorably than favorably — 54% to 41% in the RealClearPolitics average of surveys. That's slightly worse than Biden's numbers: 52% unfavorable to 44% favorable.

But Trump remains the prohibitive favorite among Republicans for the GOP nomination in 2024, leading the pack with 52% support in the RealClearPolitics average, with Florida Gov. Ron DeSantis a distant second at 21%, followed by Trump's estranged Vice President Mike Pence at 8% and Texas Sen. Ted Cruz at 3%.

In a head-to-head contest, Biden and Trump are tied in the latest Wall Street Journal poll, though state by state, which is how presidents are elected, show pockets of strength for each.

Conway said victory would be assured if Trump keeps attention focused on the "binary" choice between his record and Biden's.

But he still airs grievances about the 2020 defeat.

"Your favorite president got screwed," Trump told the crowd in Iowa. "I ran twice, I won twice."

Throughout the 2022 election, Trump steered millions into key races. His endorsements shaped primaries around the country.

A flurry of rallies through Monday — Iowa, Pennsylvania, Florida and Ohio — add to the impression that he's gearing up.

All are key presidential battlegrounds.

A big night for his slate will cement his grip on the GOP and his claim to the 2024 nomination.

Thursday's Sioux City rally gave Trump a chance to reconnect with caucus-goers, as he stumped for Sen. Chuck Grassley, an 89-year-old institution who's seeking his eighth 6-year term. 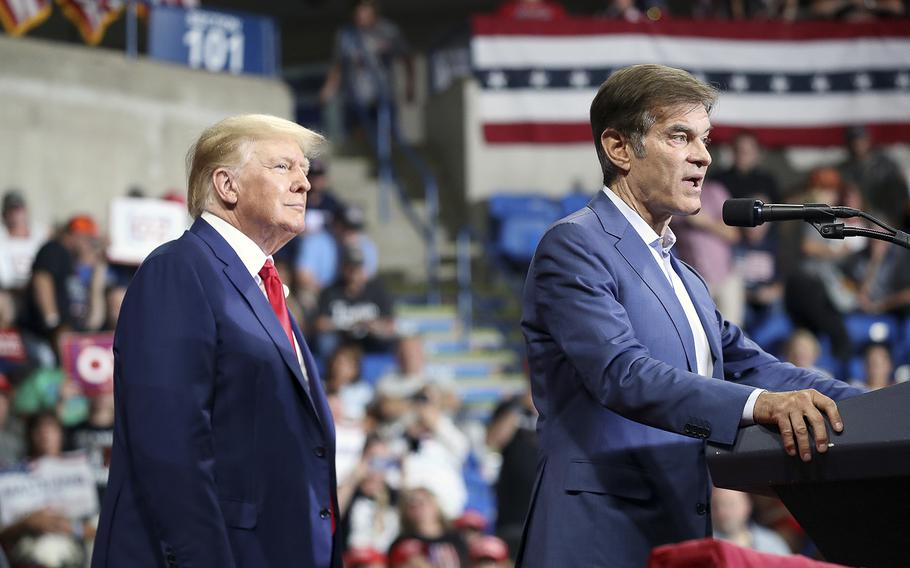 Former President Donald Trump listens as Pennsylvania GOP Senate candidate Dr. Mehmet Oz speaks at a rally in Wilkes-Barre, Pa., on Sept. 3, 2022. According to reports on Friday, Nov. 4, Trump is tentatively planning to announce his intention to run for president in 2024. (Spencer Platt/Getty Images/TNS)

He's also thrown his weight behind contenders in the battlegrounds that will decide control of the Senate, including Walker in Georgia, Mehmet Oz in Pennsylvania, J.D. Vance in Ohio and Blake Masters in Arizona.

If Republicans fall short because Trump's picks lose, that would embolden DeSantis and the two dozen other Republicans itching for a shot at the White House, though Conway shrugged off the possibility that anything could derail his plans.

She predicted that Trump will emerge as a "big winner" from the midterms, thanks to his efforts on behalf of scores of candidates across the country.

He'll stump in Miami on Sunday for Sen. Marco Rubio. DeSantis was not invited.

Conway offered a brushback pitch when asked to handicap the Florida governors' chances against Trump.

"If I'm Ron DeSantis, sure, I can think about running, but why not go be the best two-term governor of the third-largest state in modern history, if not ever, and then walk into the presidency in 2028?" she said.

For Trump, announcing his candidacy soon would bring a number of benefits.

For one, he could more easily paint his many legal troubles as politically motivated, including the House Jan. 6 inquiry that House Republicans intend to disband if they win control of the chamber Tuesday, which seems likely.

The Justice Department is weighing whether to charge Trump for mishandling presidential documents, after an FBI raid in August uncovered reams of official material, much of it classified, at his Florida estate. By law, former presidents must turn over all official documents to the National Archives, classified or not.

Criminal charges against a former president, as unprecedented as Trump's refusal to comply with the Presidential Records Act, would create an uproar that would be compounded if he were also an active presidential candidate.

In the 2016 caucuses, the future president fell short to Cruz and accused the Texan of cheating — as he still accuses Democrats of doing in 2020.

Cruz collected 27.6% in Iowa, trailed by Trump at 24.3% and Rubio at 23.1%. Because of the quirky rules, Cruz left Iowa with momentum and bragging rights but just one more delegate than his rivals.

In 2020, Biden collected 81 million votes to Trump's 74 million, and topped him in the Electoral College by the same margin Trump had described as a landslide four years earlier when he beat Hillary Clinton.

On the Democratic side, a rout in the midterms would not only hobble Biden's presidency. It would scramble the 2024 contest, unless he can somehow spin away perceptions that he served as more drag than asset.

Biden's approval rating dipped below 50% five months into his term and hasn't topped that level since. His 40% rating in Gallup's latest survey is the lowest for any president at this point since World War II.

The last time an incumbent passed on seeking reelection was in 1968. That was Texas' Lyndon Johnson, weakened by Vietnam. His vice president, Hubert Humphrey, lost to Richard Nixon.

Who would the party turn to if not Biden?

Vice presidents are often the prohibitive favorite. Kamala Harris would not be. She'll avoid blame for a midterm defeat — but only because she hasn't been in much demand on the stump. The gap between her own favorable and unfavorable ratings is nearly double Biden's.

As his understudy, she has little to show for her highest profile assignment, dealing with Mexico and Central America on illegal migration – apart from a stinging Republican caricature as the border czar who avoids the border.