Tiny toiletries forever? The future of TSA, from liquids to shoes. 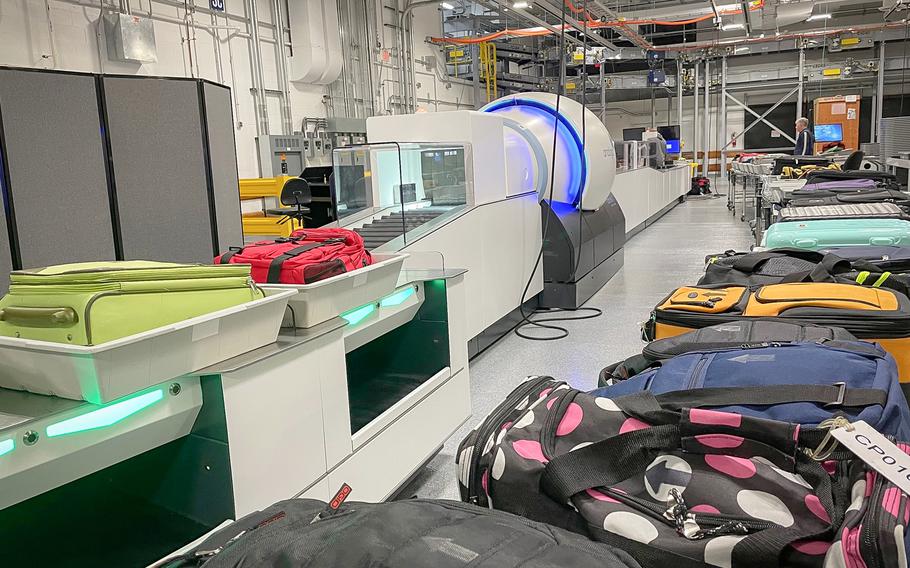 On Nov. 19, the Transportation Security Administration will turn 21 — old enough to drink, but not a full-size alcoholic beverage.

The Department of Homeland Security agency was established in response to the Sept. 11 terrorist attacks and subsequent threats to air travelers’ safety, such as the foiled shoe bomber in 2001 and the 2006 attempt to detonate liquid explosives hidden in soda bottles on flights from England to North America. Many of the safety measures introduced back then are still with us now, such as the 3-1-1 liquids rule.

“I don’t think anyone is saying that the way we did things are the way we will do things,” said J. Matt Gilkeson, director of TSA’s Innovation Task Force, which tests new security technologies. “We want to be beyond where we were 20 years ago.”

With TSA’s birthday approaching, we checked in with the agency to learn about the latest security developments and what the future might hold for travelers and their toiletries.

No more removing electronics and liquids

If you are one of the 25 million members of TSA PreCheck, you can skip this section. As you well know, trusted travelers can leave their electronics and quart-sized pouch of Lilliputian liquids, gels, pastes and creams inside their carry-ons at security checkpoints. The rest of you: Good news is afoot, if not already underfoot.

Since 2019, TSA has been acquiring and deploying Computed Tomography (CT) X-ray systems, the same technology that hospitals use for patients and TSA employs on checked bags. The agency initially purchased 300 CT scanners and has expanded its inventory by more than 1,230 machines. Airports have been installing the technology at a steady pace. (Note: The nation’s 430 federalized airports don’t incorporate new technologies simultaneously, because of budget and staffing limitations. So what you experience at one airport might not be the same at another.)

“Waiting in Lane 21? Leave All Items In Your Bag,” reads a banner sign at Washington-Dulles International Airport. “Including ... Computers, Cell Phones, and Tablets!”

The three-dimensional machines provide a more detailed and comprehensive picture of a bag’s contents than the earlier two-dimensional models. In addition, TSA officers can electronically poke around the luggage’s interior, which will reduce the frequency of manual bag checks.

“It’s like a CAT scan machine,” said Scott T. Johnson, TSA’s federal security director at Dulles. “You can spin it and look at different angles, or slice it, dice it and [virtually] pull something out of a bag.”

If the machine identifies suspicious organic material, it will issue an alert. The officers, who receive additional training for the 3D scanners, have discovered several items that often trigger a warning, despite their apparent innocence.

Gilkeson said object recognition is about five years away. “We are testing here,” he said, referring to the facility in a former post office on the grounds of Reagan National Airport, “and in the operational environment.” (If you are curious about the latest developments, fly in or out of Las Vegas’s Harry Reid International Airport, home of the Innovation Checkpoint, a TSA lab for security technology.)

The new machines, which are snow white with a bulbous midsection and colored lights, streamline security on multiple fronts. For example, passengers place all of their bags in the bins, which transport the items in a tidy and orderly fashion, like widgets in a factory assembly line. The trays are tagged with an RFID, which helps the officers keep track of the status of the items in the bins.

“We are matching the image to the bin and luggage,” said Gilkeson, “but not yet to people.”

After the bins exit the scanner, they are sent on one of two routes: to the passenger waiting on the other side or to an area where an officer will conduct additional screening. The empty bins, meanwhile, will return to their starting point, eliminating shortages of containers at the entry point and pileups at the finish line.

About 100 airports have the machines, including several international facilities, such as Hartsfield-Jackson Atlanta, Baltimore-Washington, Chicago O’Hare, Miami and Los Angeles. An agency spokesman said the equipment will become as ubiquitous as the X-ray machine, unless (or until) newer technology supplants it.

Since not every checkpoint or lane will be furnished with a CT scanner, look for the signage or listen to the officer’s instructions. If an employee tells you to keep your electronics and liquids inside, keep your bags zipped up. Sadly, we are going to be stuck with mini-toiletries and temporary caffeine withdrawal for the near future, if not longer. The technology is not advanced enough to quickly determine whether a large container of shampoo or a travel mug brimming with coffee contains explosive material.

Passengers with exceptions, such as people traveling with infants, nursing parents or travelers with medical needs, can carry on liquids exceeding 3.4 ounces. However, TSA requires additional screening to ensure the safety of these liquids. Travelers in this group should notify security of their medically necessary liquids.

The officer will place the liquid container in an explosive detection device that resembles an Easy-Bake oven. If the light turns green, the passenger - and the liquid - are free to proceed. If a red light flashes, the officer will hold a test strip over the bottle and give it a little squeeze. If the vapors do not cause a change in color, the item is deemed safe. A different hue means that the liquid is unsafe and cannot advance through the checkpoint. The passenger has the choice of sending it in their checked luggage or surrendering it.

The procedure takes several minutes, a delay that may feel negligible for the individual traveler but interminable to everyone else in line, waiting for their turn.

“It’s not feasible to screen oversized liquid for everyone,” Gilkeson said. “We need to speed up the time.”

You’ll take off your coat, but maybe not your shoes

The season is approaching when PreCheck members must follow one of the rules that applies to standard passengers year-round: removing their heavy outerwear.

“The machine can’t penetrate through your coat to see the reflection of your skin,” Gilkeson said. “It doesn’t know your jacket is a jacket.”

As for footwear, the wide range of shoe materials is a boon for fashionistas but a bust for scanning machines. “There are so many different types of shoes, we want to lower the false alarm rate,” he said, adding, “You have to know your shoes. Do they have metal?”

To accommodate the diversity of shoes, the agency has launched a pilot program testing machines that inspect the clothing item from the ground up. Basically, you are stepping on the scanner. One way to avoid removing your shoes: If a TSA bomb-sniffing dog inspects you in line and moves on. A disinterested whiff means that you have passed the test and can leave your shoes on.

Gilkeson admitted that no one enjoys a pat-down.

“We want to get out of the business of touching people,” he said.

TSA has put a priority on creating a more hospitable environment at security checkpoints, especially for transgender travelers. If a pat-down is required, the agency will no longer assign a male or female officer based on appearance of the traveler, which can lead to an uncomfortable public conversation about gender identity. Instead, the officers will press a single button (previously they pushed a male or female button) and the traveler can choose the sex of the officer that they prefer. TSA announced the program in March and will begin the software upgrades to the Leidos Advanced Imaging Technology by the end of the year, aiming to complete the update by next fall.

Also on the sensitivity docket: hair pats. Gilkeson said TSA is exploring ways to phase out the controversial procedure, which could upset travelers whose hair styles are associated with a cultural practice or religious belief.

TSA is chugging down the road to self-security, a trend that will give passengers more responsibilities and autonomy, similar to check-in and baggage tagging.

Passengers who fly out of airports with Credential Authentication Technology units do not have to present their boarding passes to an officer. Official forms of identification, such a driver’s license or passport, will suffice. The system is in place at about 1,300 travel document checker podiums at airports nationwide.

In the next level of DIY security, travelers will scan their ID themselves, a trend that dovetails with the contactless movement born during the pandemic. The identification synchronizes with the airline booking information and informs the officer that the bearer of the ID is a ticketed passenger and eligible to proceed through the security. ID-checking of the future could also entail a camera that snaps a photo of the passenger and matches the image of their face with their ID.

“The machine is looking for bone structure,” Gilkeson said.

The agency is testing the technology in PreCheck lanes at airports in Baltimore, Atlanta, Phoenix and DCA. “People think it’s a hand sanitizer,” he said of the equipment that does resemble a dispenser.

The long-term goal is to establish e-gates that allow passengers to pass through security as quickly and painlessly as swiping their card at a Metro station.

Of course, not all of TSA’s technologies succeed. The puffer machine, which blew air at passengers like small sneezes, was abandoned, as was the hologram that provided security checkpoint information and directions at three New York and New Jersey airports. The holograms failed because passengers were too rushed or distracted to stop and listen to a talking light fixture.