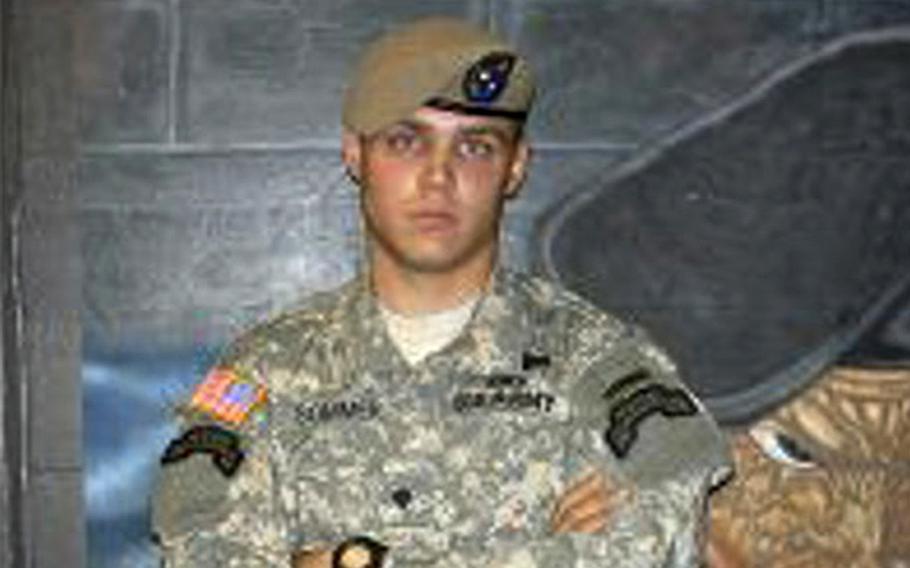 Luke Elliott Sommer, a former Army Ranger seen here in 2005, had his 44-year prison sentence reduced by 13 years after a judge agreed that he has reformed while incarcerated. (WikiMedia Commons)

A former Army Ranger who led a 2006 bank robbery in Washington state and then tried to hire someone to kill a prosecutor had over a decade shaved off his sentence this week, as a judge agreed that he’d reformed behind bars.

Luke Elliott Sommer, 36, had asked for a review of his 44-year sentence based on his age at the time of the crimes and his recent behavior.

Despite calling Sommer’s offenses “some of the most extreme, violent and dangerous actions” he’d seen, District Judge James Robart reduced the sentence to 31 years, a Justice Department statement Wednesday said.

Staffers at the maximum-security prison in Florida where he’s being held supported Sommer’s assertions that he’s changed, the statement said.

“He claims to be committed to working on his reform and doing what is right,” Nick Brown, the U.S. attorney for the Western District of Washington, told the court, according to the statement. “He now has more than a decade to demonstrate that commitment while he remains incarcerated.”

Sommer masterminded the 2006 robbery at a Bank of America branch in Tacoma, Wash., while he was stationed at nearby Fort Lewis, which is now part of Joint Base Lewis-McChord.

He recruited two other soldiers and two Canadian nationals for the heist. They equipped themselves with fully automatic AK-47 rifles, semi-automatic handguns and soft body armor, according to court documents.

The group made off with over $50,000. But a witness who spotted the getaway car reported it to police, who traced it to Fort Lewis, where evidence of the crime was found in the men’s barracks, the documents showed.

Sommer, who has dual U.S. and Canadian citizenship, initially claimed that the robbery was a political protest to draw attention to war crimes he saw while deployed to Iraq and Afghanistan.

After pleading guilty to four felonies, including armed bank robbery, and receiving a 24-year sentence, Sommer then tried to put out a hit on the prosecutor in the case. However, the person he sought to hire for the job was an undercover FBI agent.

He admitted to trying to pay as much as $20,000 to have the official killed, and his sentence was extended. While detained, he also attacked a co-defendant in the bank robbery with a homemade knife, the Justice Department said.

In his motion for a sentence reduction, Sommer said he was clean and sober after years of heroin addiction. The motion was accompanied by nearly 200 pages of documents, letters and testimonials supporting his early release, including some written by prison guards, other inmates and program managers, The Seattle Times reported in August.

Three victims of the robbery told the court Wednesday about the post-traumatic stress and anxiety they have endured, with one describing how she saw the red dot of Sommer’s laser sight pointed at the bank tellers, the DOJ statement said.

However, in granting Sommer’s request, Robart said “punishment is not vengeance or retaliation,” according to the statement.