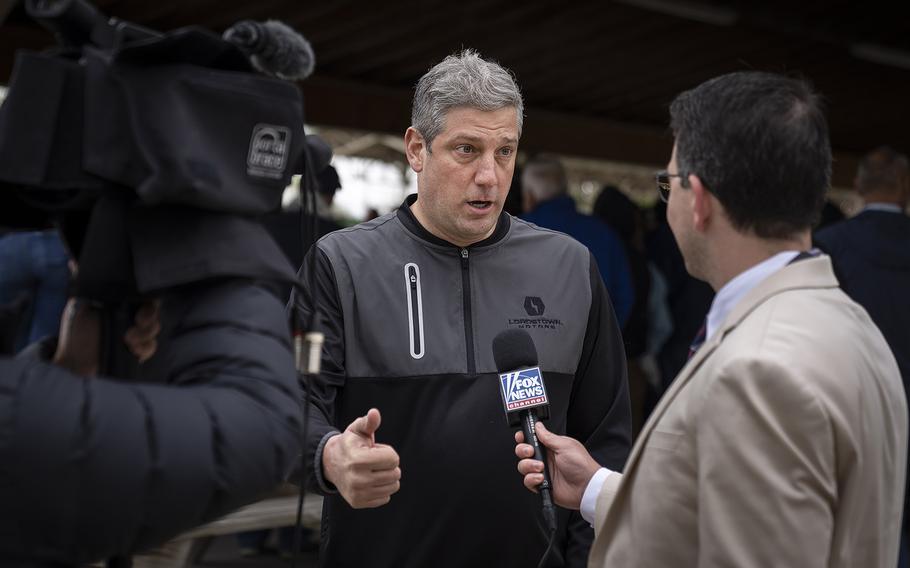 U.S. Rep. Tim Ryan, Democratic candidate for U.S. Senate in Ohio, speaks with Fox News during a rally in support of the Bartlett Maritime project, a proposal to build a submarine service facility for the U.S. Navy, on May 2, 2022, in Lorain, Ohio. (Drew Angerer/Getty Images/TNS)

(Tribune News Service) — Social media users tied to Russia are using political cartoons to try to influence the outcome of tight electoral races ahead of the U.S. midterms, according to research provided exclusively to Bloomberg News.

Members of a Russian group accused of meddling in prior U.S. elections have pushed internet memes that promote right-wing conspiracy theories in a way that aims to undermine support for Democratic political candidates, according to the social media analysis firm Graphika Inc.

The campaign also promoted misleading Russian talking points, such as the idea that Ukraine is a Nazi state and the notion that the Biden administration — by lending aid to Ukraine — is contributing to a falling standard of living in America.

Since Oct. 29, those users have shared six new political cartoons, signed by “Schmitz,” according to Graphika’s latest findings. One post claimed that Ryan, the Democrat running for U.S. Senate in Ohio, would release incarcerated drug traffickers from prison. Another image spread a racist image of Sen. Warnock of Georgia, portraying him as threatening people who didn’t support the Black Lives Matter movement.

It remains unclear if Schmitz is a real artist whose work has been re-appropriated or an entirely fictional persona, said Jack Stubbs, vice president of intelligence at Graphika.

The Russian Embassy in Washington didn’t respond to a request for comment. Moscow has consistently denied any involvement in influence operations or cyber-espionage.

The efforts have gained limited traction online, with the activity primarily occurring on platforms popular with the far-right, such as the social media network Gab and a discussion forum at patriots.win, according to the report. Yet the activity from people previously associated with the Internet Research Agency, or IRA, which is best known for trying to influence the 2016 U.S. presidential elections with similar social media posts, signals an ongoing internet from Russia in trying to sway Americans’ opinion, according to Graphika.

“A lot of these narratives emanate from alternative platforms that are already popular with fringe groups,” said Stubbs. “We know the same Russian group active in elections in 2016, 2018 and 2020 are on the same platforms pushing inflammatory narratives and now directly targeting Democratic candidates in these midterm races.”

The activity identified by Graphika is associated with the Newsroom for American and European Based Citizens, also known as NAEBC, a propaganda organization that security researchers have associated with the IRA. The threat intelligence firm Recorded Future Inc. in October determined that NAEBC has used the Gab platform to promote prominent Republican lawmakers who have criticized President Joe Biden.

Some of assets pushed links to media entities tied to Yevgeny Prigozhin, a confidant of Russian President Vladimir Putin and founder of the IRA who is wanted by the FBI for his alleged involvement in election interference.

The number of accounts involved with amplifying the most recent activity wasn’t immediately clear. The propaganda activity in recent weeks is led by a subset of accounts that have been largely dormant since January and only recently resumed activity, according to Graphika.