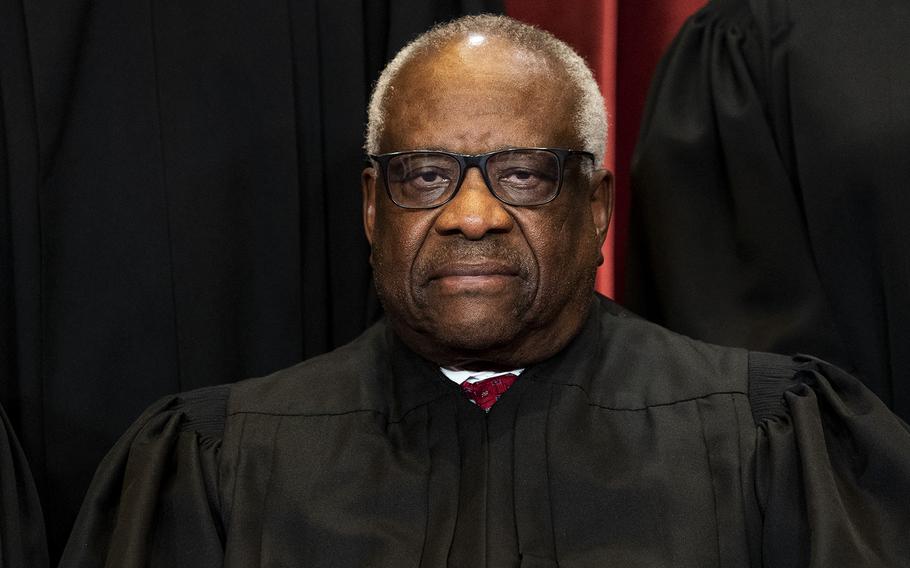 Associate Justice Clarence Thomas sits during a group photo of the justices at the Supreme Court in Washington, D.C., on April 23, 2021. (Erin Schaff/Pool/Getty Images/TNS)

Lawyer Kenneth Chesbro told colleagues on Team Trump that their only chance of winning a decision before Jan. 6, 2021, was if Thomas were to rule in Trump's favor in a hypothetical case emerging from the close presidential race in Georgia.

"Thomas could be the one to issue some sort of stay or other circuit justice opinion saying Georgia is in legitimate doubt," Chesebro wrote in an email to Trump's legal team on New Year's Eve 2020.

"(Thomas would be) our only chance to get a favorable judicial opinion by Jan. 6, which might hold up the Georgia count in Congress," he added.

The right-wing judge is assigned to handle emergency appeals from the appeals court that covers Georgia, a fact that Trump's lawyers hit on as a possible opening in their Hail Mary legal fight.

John Eastman, another lawyer who is facing federal investigation for his role in the plot to keep Trump in office, suggested that the main value of such a ruling would be political, not legal.

Even if it didn't hold legal water, a temporary ruling issued by Thomas could "kick the Georgia legislature into gear" to overturn the election results, Eastman wrote.

The messages were part of a batch of eight emails that Eastman sought to withhold from the congressional committee investigating the Jan. 6 attack on the Capitol on the grounds of attorney-client privilege.

A federal judge rejected his claim in a harshly worded ruling that called them evidence of Trump's likely crimes. Eastman handed them over to the panel last week.

The damning content of the emails were first reported by Politico.

Cheesbro made it clear that Team Trump's overriding goal was to inject some measure of legal uncertainty into President Joe Biden's victory before Congress was scheduled to certify the Electoral College win on Jan. 6, 2021.

"(I)f we can just get this case pending before the Supreme Court by Jan. 5 ... I think it's our best shot at holding up the count of a state in Congress," Chesebro said.

Thomas has been by far the most pliant justice on the conservative Supreme Court when it comes to protecting Trump.

He was the lone judge to vote to rule that the Jan. 6 committee should not get access to Trump's White House records, including damning text messages showing that his own wife, Ginni, was deeply involved in the scheme to overturn the election.

Thomas has refused to recuse himself from election cases despite Ginni Thomas' ties to Trump's team.