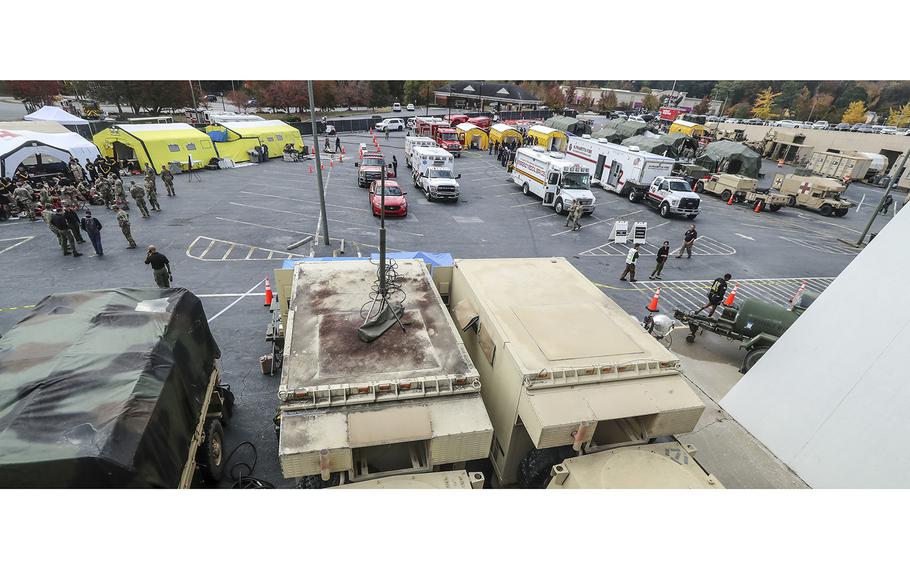 (Tribune News Service) — The Atlanta-Fulton County Emergency Management Agency and several other agencies on Tuesday prepared for the unthinkable: a nuclear detonation.

The agencies — local, state and federal officials, as well as military and civilian response teams — all participated in the mock exercises near Greenbriar Mall that was organized by the Defense Department’s U.S. Northern Command in Colorado and Atlanta’s EMA.

They are designed to get agencies familiar with each other and a variety of response methods in order to determine the most efficient and effective way to save as many people as possible when time and lifesaving resources are limited.

Miller, who is a Chemical, Biological, Radiological and Nuclear (CBRN) planning officer, said the drills are not in response to any active threats or current national or international events. The training program started before the COVID-19 pandemic but came to a halt as the virus progressed across the country and has restarted now that pandemic restrictions have eased, he said.

“We’re ( Defense Department) here to support — to help with the resiliency, to get the community back on their feet as quickly as possible,” Miller said. “For us here, this just happens to be an improvised nuclear device (scenario). It could be any other kind of disaster that requires decontamination.” Tuesday’s training was the follow-up to a March exercise in which many of the same agencies practiced the same scenarios in a new tabletop drill at Georgia State University’s Center Parc Stadium.

While countless people would die in a nuclear blast, many more could be saved with quick action, and the experience gleaned from the training exercises could pave the way for the development of a national model, The Atlanta Journal-Constitution previously reported.