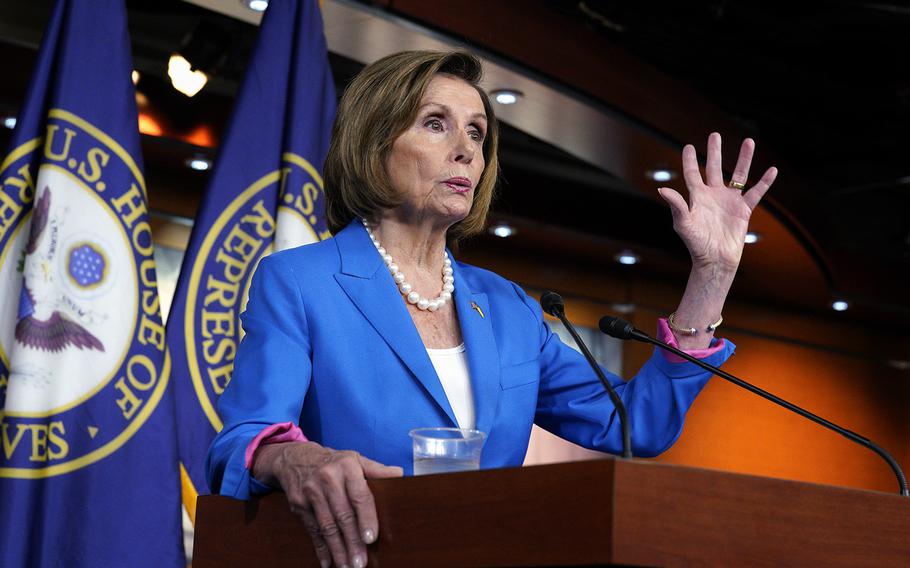 Democrats say Republicans' long history of singling out the most powerful woman in Congress, coupled with the GOP's embrace of election denialism and conspiracy theories, contributed to the brutal attack that hospitalized Pelosi's husband, Paul, after the alleged assailant broke into their San Francisco home on Friday.

On Monday, the Justice Department charged the man, David DePape, with assault and attempted kidnapping. Authorities said DePape struck Paul Pelosi in the head with a hammer before being restrained by officers. Officers recovered tape, a rope, a second hammer, rubber and cloth gloves and zip ties from the crime scene.

DePape told San Francisco police he planned to hold Nancy Pelosi hostage, and would let her go if she told the truth and break her kneecaps if she lied.

"The attack on Paul Pelosi shows the real and violent consequences of conspiracy theories and the millions of dollars Republicans have spent targeting Speaker Pelosi," Rep. Sara Jacobs, D-Calif., said. "Elected officials sign up to be in the public eye, but that doesn't mean we signed up for death threats, harassment and violence — and it certainly doesn't mean that for our loved ones."

Republican National Committee Chair Ronna McDaniel rejected the notion that Republican ads are responsible in any way for the attack on Paul Pelosi.

On Oct. 28, the day her husband was assaulted, Pelosi was featured in nearly $1.3 million worth of ads, including 97 spots that collectively aired on televisions more than 3,000 times that day.

While the ads do not condone violence, many use battle rhetoric that portrays Pelosi as an enemy in a fight over the nation's future.

According to transcripts of the GOP ads, Pelosi's "failed policies are destroying the American dream," Pelosi has "declared war on working Americans," and her agenda is "radical." Some ads call for "strength to fight Biden, Pelosi and the woke mob," while many tout Republican candidates' strength to fight back.

"What has one year of Democrat-controlled Washington given us? Shortages, inflation, crime, chaos, division and failure," McCarthy says in an ad. "We can end one-party rule, fire Nancy Pelosi and take our country back."

McCarthy has come under fire for failing to issue a strong public statement condemning the attack on Paul Pelosi. A spokesperson released a statement to reporters who requested one, saying, "Leader McCarthy reached out to the Speaker to check in on Paul and said he's praying for a full recovery and is thankful they caught the assailant."

Last year McCarthy joked at a Tennessee fundraiser that if he succeeds Pelosi as House speaker and she turns over the ceremonial gavel to him, it "will be hard not to hit her with it."

Drew Hammill, a Pelosi spokesperson, responded at the time that "[a] threat of violence to someone who was a target of a #January6th assassination attempt from your fellow Trump supporters is irresponsible and disgusting."