Search for solutions drives race to save Utah salt flats 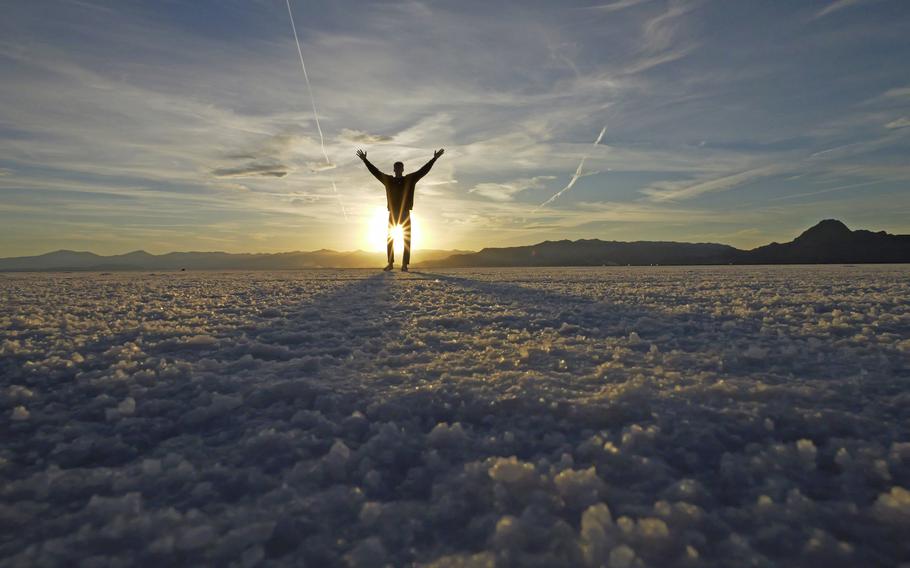 A visitor to Bonneville Salt Flats poses for photographs Saturday, Oct. 8, 2022, near Wendover, Utah. The salt is thinning as climate change drags the West into its third decade of drought, yet it’s unclear how that affects the seasonal flood patterns the landscape relies on to maintain its size and footprint. (Rick Bowmer/AP)

WENDOVER, Utah — In the Utah desert, a treeless expanse of pristine white salt crystals has long lured daredevil speed racers, filmmakers and social media-obsessed tourists. It's so flat that on certain days, visitors swear they can see the curvature of the earth.

The glistening white terrain of the Bonneville Salt Flats, a remnant of a prehistoric lakebed that is one of the American West's many other-worldly landscapes, serves as a racetrack for land speed world records and backdrop for movies like "Independence Day" and "The World's Fastest Indian."

But it's growing thinner and thinner as those who cherish it clamor for changes to save it.

Research has time and again shown that the briny water in the aquifer below the flats is depleting faster than nature can replenish it. As nearby groundwater replaces the mineral-rich brine, evaporation yields less salt than historic cycles of flooding and evaporation left on the landscape.

It's thinned by roughly one-third in the last 60 years. The overall footprint has shrunk to about half of its peak size in 1994. The crust keeps tires cool at high speeds and provides an ideal surface for racing — unless seasonal flooding fails to recede or leaves behind an unstable layer of salt. Racers struggle to find a track long enough to reach record speeds with only 8 miles of track compared 13 miles several decades ago.

Scientists largely agree that years of aquifer overdraws by nearby potash mining have driven the problem, yet insist that there's no hard evidence that simply paying the mining company to return water to the area will solve it amid detrimental human activity like extracting minerals or driving racecars. It's mined from other iconic salt flats, including in Chile, where the thickness is not shrinking in a similar manner.

In Utah, after three decades of studies examining the salt flats, nothing has slowed the deterioration. But officials are funding a new study as they try to find a solution. Researchers are seeking to pinpoint why the salt is fading and what can be done to stop it. Under a $1 million research project spearheaded by the Utah Geological Survey, scientists are gathering data to understand the effects climate change, racing, repaving the salt and operating the mine on leased federal land have on preserving the Salt Flats.

The salt is thinning as climate change drags the West into its third decade of drought, yet it's unclear how that affects the seasonal flood patterns the landscape relies on to maintain its size and footprint. The Blue Flame performs a test run just before at Bonneville Salt Flats, Utah, on Nov. 4, 1970. The crust keeps tires cool at high speeds and provides an ideal surface for racing — unless seasonal flooding fails to recede or leaves behind an unstable layer of salt. (AP) Captain George Eyston drives his Thunderbolt at the Bonneville Salt Flats, Utah on Nov. 6, 1937. The crust keeps tires cool at high speeds and provides an ideal surface for racing — unless seasonal flooding fails to recede or leaves behind an unstable layer of salt. (AP)

Frustration is boiling over for Dennis Sullivan, a car-builder and racer who set a land speed record in his 1927 Model T street roadster. His organization, the Salt Flats Racing Association, is convinced the potash mining company that extracts minerals from the flats is the primary reason that the aquifer is being depleted. But rather than point fingers that direction, he and other racers blame the U.S. Bureau of Land Management, which oversees the area and is required by federal law to balance multiple uses and preserve it now and into the future.

To save the landscape, Sullivan says, the U.S. government needs to find $50 million over 10 years to pay Intrepid Potash, the mining company, to pour briny water it's drawn from the land back on to the flats. He bristles at seeing more time and money spent on research when to him the solution is clear.

"In the world I came from, you study something, you figure out what changes you need to make, you make the changes and then you go back and study it again to see if your changes had an effect on it," said Sullivan. "It's ludicrous to just keep studying it until you do something."

The fragile landscape has become less reliable for racers, who had to cancel "Speed Week" events scheduled for this fall after the salt flats flooded and left them without enough space to drive on.

Though racers insist the answer is obvious, scientists contend that there's no hard evidence that simply returning briny water will reverse the effects of extraction and maintain the salt flats. State of Utah Department of Natural Resources geologists Paul Inkenbrandt, left, and Jeremiah Bernau walk along the Bonneville Salt Flats on Aug. 29, 2022, near Wendover, Utah. The glistening white salt of the world famous area is shrinking near the Utah-Nevada line. (Rick Bowmer/AP)

Sullivan doesn't blame Intrepid Potash; it has a leasing agreement with the federal government. He says land managers haven't invested in preserving the landscape or replenishing the salt taken off of it.

Intrepid Potash did not respond to questions from The Associated Press.

Jeremiah Bernau, a geologist working on the study with the Utah Geological Survey, said the mining company has already been pouring salt and it's unclear if that's the answer.

A 2016 study found that the areas most susceptible to thinning were places where races are organized. In simple terms, it changes how water can flow through the crust, Bernau said.

"Every use is going to have some sort of impact upon it. It's just trying to rank those, understand how much that impact is and what we can do to mitigate or understand it," Bernau said on a recent tour of the area, where reporters accompanied him as he measured the thickness of the salt and depth of the aquifer.

"My work is trying to understand how is that working and what are the actions that we can do in terms of helping to preserve this landscape," he said.

Backers of the study currently underway hope, if successful, the federal government will consider returning more salt in order to preempt conflict and allow the racers and miners to continue as they have been. The Intrepid Potash canal is shown at the Bonneville Salt Flats on Monday, Aug. 29, 2022, near Wendover, Utah. Potash is potassium-based salt primarily used throughout the world as a fertilizer for crops such as corn, soy, rice and wheat. It’s extracted in 13 countries throughout the world, mainly from prehistoric lakebeds like Bonneville’s. (Rick Bowmer/AP)

If the study shows salt laydown is effective, Utah state geologist Bill Keach said he expects racers will use the information to push for federal funding to keep up the project.

In 2019, when Utah lawmakers greenlit the initiative, they allocated $5 million, on the condition that the federal government would also provide funding, to return the briny water needed to preserve the salt crust.

Rep. Steve Handy, a Republican who spearheaded the effort, said the racers' lobbyists initially suggested the federal government would meet Utah's investment with an additional $45 million, giving the program the $50 million that Sullivan and other racers say is needed to maintain the status quo.

U.S. Rep Chris Stewart, who represents the area, assured Handy his office was working to secure the funds. Without hard evidence the salt laydown would restore the crust, the $45 million hasn't materialized but Stewart said in a statement that he "remains absolutely committed to finding science-based solutions" to save the crust.

Utah clawed back the majority of the funding after it got no matching federal funds.

"They're doing what they can with $1 million, which has not spread nearly far enough," Handy said, noting that it was ultimately the job of the federal government, not Utah, to manage the land.

But while solutions and the extent to which different parties are responsible is debatable, nobody disagrees that the landscape is a jewel worth preserving. Kneeling down, the crust of fused crystals looks like popcorn. From afar, the surface is moon-like, and draws hundreds of visitors daily, some coming in brightly colored dresses at sunset in search of the perfect picture.

"The fact that you can go out here and see this vast, white expanse with such a beautiful texture on the crust. It unleashes something, maybe more primal in yourself," Bernau said, looking off into the distance.