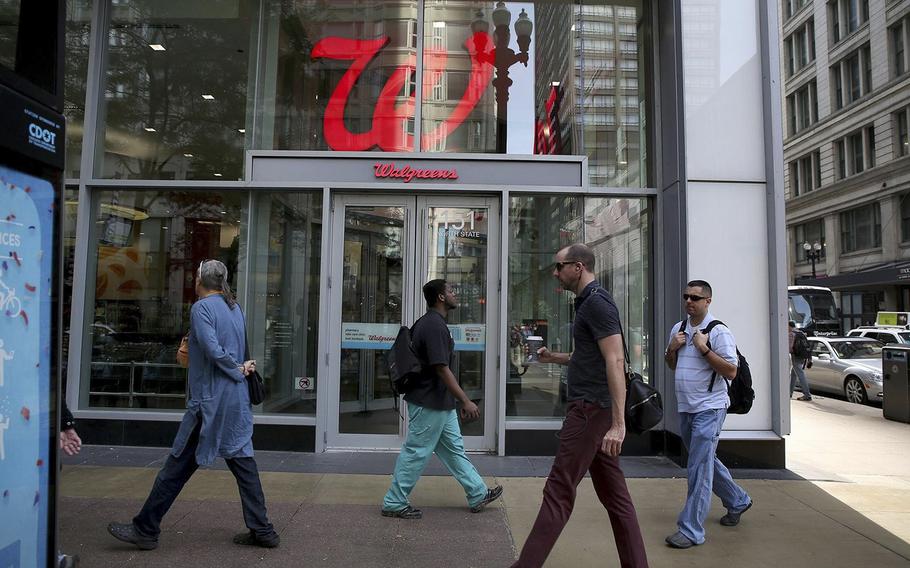 The Walgreens store at State and Randolph streets in Chicago. (Nancy Stone/Chicago Tribune/TNS)

The proposed settlement — potentially one of the last big accords spawned by more than five years of litigation over the highly addictive painkillers — calls for CVS to pay $4.9 billion, Walgreens to pay at least $4 billion and Walmart to pay $3 billion, according to the people, who asked not to be identified because they weren't authorized to speak publicly about the tentative deal.

The settlement won't be finalized until enough states, counties and cities agree to it, the people said. That's the way a $26 billion opioid accord involving Johnson & Johnson and the three largest U.S. drug distributors was structured in 2021.

A group of six state attorneys general who targeted pharmacy providers for not properly monitoring opioid prescriptions handled by their companies led months of talks that generated the proposed accord, the people said.

Spokespeople for CVS, Walgreens and Walmart declined to comment Tuesday on the proposed deal. CVS is scheduled to announce third-quarter earnings Wednesday.

The settlement marks another step forward in the sweeping legal fight over opioids — blamed for more than 500,000 U.S. deaths over the last two decades. States, cities and counties filed almost 4,000 suits against more than a dozen drugmakers, distributors and pharmacies seeking compensation for billions spent battling the U.S. opioid epidemic. So far, they've recovered about $30 billion to bolster police and drug-treatment budgets, based on data collected by Bloomberg News.

Municipalities accuse the companies of downplaying the painkillers' addiction risks and sacrificing patient safety for billions in profits. They've had some success persuading juries to hold the companies liable for creating "public nuisances" by botching their handling of the painkillers. However, state and local government also have lost bids to tag drugmakers with responsibility for wrongdoing in connection with the epidemic.

The pharmacy chains were sued for allegedly failing to create legally mandated monitoring systems to detect illegitimate opioid prescriptions being filled. The companies countered that most of the problems tied to the painkillers come from illegal versions of the drugs brought in from outside the U.S. by criminal gangs.

In August, a federal judge overseeing all federal opioid suits ordered CVS, Walgreens and Walmart to pay $650 million in so-called "abatement fees" to help two Ohio counties cope with the fallout from the public-health crisis created by the epidemic. His ruling came after jurors held the chains responsible for lax opioid monitoring.

Judges in New Mexico and San Francisco are currently hearing evidence against Walgreens in cases accusing the company of fueling the opioid crisis.