The British ambassador brings her unique style to Washington 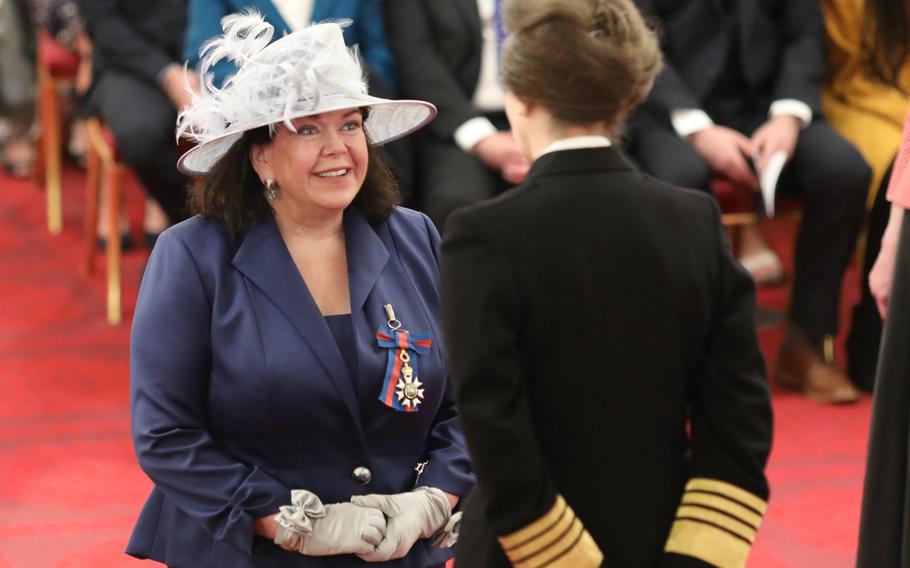 WASHINGTON — Last month’s Meridian Ball was a playful, black-tie take on a county fair — if the fair were full of diplomats, politicians and power brokers. Virginia Gov. Glenn Youngkin greeted well-wishers near the Ferris wheel, White House medical adviser Anthony Fauci posed for selfies by the carousel, and British Ambassador Karen Pierce spent much of the night next to the blue-ribbon pies, surrounded by people eager to meet arguably the most important ambassador in the nation’s capital.

The British envoy in Washington has always been a powerful and respected figure, sought after as a strategic partner and a VIP dinner guest. But Pierce stands out from her predecessors: colorful, extroverted and unpretentious — she once wore a feather boa to a United Nations Security Council meeting — not to mention the first female ambassador to represent her country in the United States.

“She disarms people,” says Stuart Holliday, president of Meridian International Center, the diplomatic nonprofit organization that hosted the event. “Everyone expects the British ambassador to be somewhat distant and formal. She’s this joyous, approachable person — which is unusual and new for British ambassadors. You listen to her and don’t think she’s speaking down to you. She’s just very good at what she does.”

Although Britain elected a female prime minister in 1979, it took four decades to send a woman to lead the embassy in Washington. (“The Americans were way ahead of all other countries on this,” she says.) Pierce arrived in 2020, just as the pandemic shut down the city, then spent most of the next two years stuck on Zoom and phone calls. She hosted or attended as many parties as time and lockdowns permitted; as she loves to say, “Diplomacy is a contact sport.”

Her job had some unexpected twists in the past two months: Pierce was all over the news after the queen’s death and the outpouring from Washington VIPs. But the change of prime minister from Boris Johnson to Liz Truss to Rishi Sunak doesn’t affect her job, she says, as she’s here for at least the next two years regardless: “I am a career diplomat, an impartial civil servant, not a political appointee, so my job is to serve the current government of the day, whoever may hold office.”

Pierce’s office on Massachusetts Avenue is a bright, sleek space filled with books, art and an 8-by-4-foot wall of refrigerator magnets. “Any tacky magnet — the tackier, the better,” she says. The collection started as gifts from colleagues around the globe; now it travels with her to every posting.

That lifelong journey began when she was just 11 years old and discovered a newspaper photograph of an American diplomat boarding an aircraft carrier.

“The photograph itself was so striking,” she remembers. “She was striking. The colors were striking: the deep blue of the sea, the gray of the aircraft carrier, the white of the sailors, the blue of the sky, the black of her skin. She was wearing a white suit. It was just one of those arresting images, and I thought, ‘Oh, I can do that job. I’d like to do that job.’”

It wasn’t an obvious choice: Her parents worked as a school secretary and an architectural draftsman in Preston, the British cotton town that was the model for Coketown in Charles Dickens’ “Hard Times.” She considered other options: Becoming a fighter pilot, but they wouldn’t let women do it in those days. Or maybe a nuclear scientist, but her physics grades weren’t strong enough. So she took the foreign service exam and began, at age 21, what would become a 42-year journey traveling the globe.

She first served in Washington in the early years of the Clinton administration, with a special emphasis on solving the crisis in Bosnia. Her posting in Japan later proved important for trade policy during Brexit. Her work on security policy made her an expert on military weapons in Europe. That led to appointments as ambassador to Afghanistan, the World Trade Organization and the United Nations. “I always would rather be working on the issue of it time, just because that’s what excites me: Being in the center of something that’s critical globally, that means something in the real world, and is on the front page of the newspapers,” she says.

Pierce credits part of her success as a negotiator to being a good listener — not just to know what the other side is saying but especially “with the Russians, being able to differentiate between what they say and what they mean.” Her gender doesn’t make a difference to her methodology, but sure — some countries try to intimidate female diplomats with sexist comments; that’s par for the course.

Pierce joined the foreign office shortly after it allowed women to keep their jobs after getting married; she juggled marriage to Sir Charles Roxburgh (who earlier this year left a high-ranking job with Britain’s Treasury) and raising two now-grown sons. When her older son was little, he had to do an essay about his mother: “He wrote, ‘My mum has a job’ — which was very unusual for his school — ‘and her is job is to save Bosnia,’” says Pierce. “And I thought, ‘Oh, that’s okay, you know, he gets it.’ “

Others got it as well: Three years ago, Pierce was named a Dame Commander of the Order of St Michael and St George, an honor presented for significant nonmilitary service to the United Kingdom.

In March 2020, newly appointed to the top job in Washington, Pierce was driving down from New York for the white-tie Gridiron dinner. Her ballgown was in the back seat, and she was “so looking forward to getting right back into the heart of Washington.” The dinner was abruptly canceled, and then everything was canceled — not ideal for a diplomat in the middle of a global crisis.

“I started here not able to go and see anybody and I had to do it all by cold-calling,” she says. “I joined every single Zoom call that I could find just to get known.” When it was safe to gather in person, she threw small garden and dinner parties and quickly established herself a social force — both as a hostess and as a guest.

“As well as being a formidable diplomat, she has a deep understanding of how culture can bring differing tribes together,” says Simon Godwin, artistic director of the Shakespeare Theatre Company in D.C. Pierce has hosted a screening of Godwin’s film adaptation of “Romeo and Juliet,” a one-man show of Shakespeare villains and dinners for the Washington National Opera and other institutions. “At all of these, rhetoric and argument have been celebrated,” he says. “The embassy has become somewhere where artists, as well as politicians, have felt welcomed and cherished.” (And, according to Godwin, the mini fish and chips are “to die for.”) It’s more fun than negotiating with the Russians.

Unlike her dark-suited predecessors, Pierce favors colorful, eye-catching clothing like the bright orange ensemble she wore when she presented her credentials to President Donald Trump or the baby pink satin evening gown she wore to this year’s White House correspondents’ dinner. (And shoes: “Too many to count; not enough, obviously.”) She claims she’s “not particularly good at fashion, but I like it.” Here, too, there’s a method to the madness: “When you’re an ambassador, it’s a bit different. You want people to remember what you said, and it’s easier if they have an image of you in a red dress rather than a black suit.”

Pierce was relatively unknown outside Washington until September when Queen Elizabeth II died and Pierce spent the next two weeks doing national interviews. President Biden made a condolence call to the embassy just hours after the death was announced; Pierce was a featured speaker at the memorial service at Washington National Cathedral attended by Vice President Harris, House Speaker Nancy Pelosi and House Minority Leader Kevin McCarthy. Washington’s mayor had the Union Jack flying at half-staff on Pennsylvania Avenue. Pierce calls the outpouring “an incredibly gracious gesture by America to show their solidarity with the queen, both as a person but also because of what she represented: common kinship, common values.”

A few weeks later, Pierce attended Elton’s John’s White House concert and received a shout out from Biden — it happened to be her 63rd birthday, and was a memorable way to celebrate. “We were bopping in the aisles with members of the Cabinet. It was terrific.”

It was a fun break from the day job: Dealing with big challenges of the 21st century — climate, migration, technology — while working with the United States to battle old-fashioned threats from authoritarian states like Russia toward countries like Ukraine.

A few years ago, a British journalist tracked down the woman in the photo who inspired Pierce all those years ago: Eleanor Hicks, a groundbreaking Black diplomat who was the U.S. consul in Nice when Pierce saw that iconic photograph. “Isn’t that incredible?” she says. “We got in touch and she’s delightful.”

Somewhere, there’s a young girl — and future diplomat — who might say the same thing about Pierce.