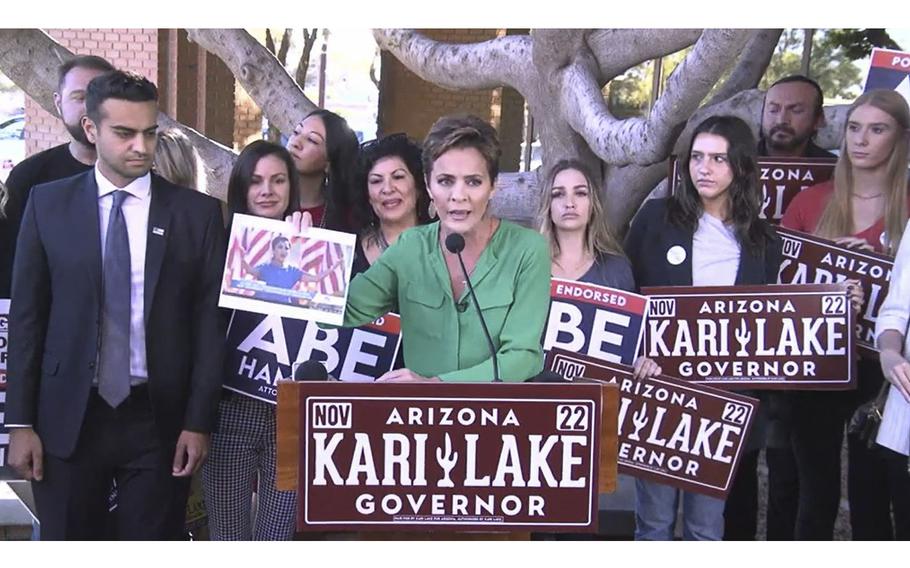 After being implicitly blamed for a break-in at the campaign office of her democratic gubernatorial rival, GOP candidate Kari Lake held a press conference as seen in this screen grab from a video posted on Thursday, Oct. 27, to expose how fake news is made. (YouTube)

Phoenix police said Thursday that they have made an arrest related to a break-in that took place at the Phoenix campaign office for Arizona Democratic gubernatorial candidate Katie Hobbs earlier this week. A spokesperson for Hobbs, Arizona's secretary of state, implicitly blamed Hobbs's Republican rival, former television news presenter Kari Lake - a charge Lake scoffed at as "absurd."

Phoenix police confirmed they responded to a burglary call at Hobbs's campaign office on Tuesday afternoon and that unspecified items were taken during the night. Detectives were checking security cameras to try to identify the suspect, police spokesman Phil Krynsky said. In surveillance images obtained from the Hobbs campaign by The Washington Post, a young man wearing shorts and a green T-shirt can be seen inside the building.

Phoenix police did not identify the person arrested and said they would release more information later Thursday.

"Secretary Hobbs and her staff have faced hundreds of death threats and threats of violence over the course of this campaign. Throughout this race, we have been clear that the safety of our staff and of the Secretary is our number one priority," Hobbs campaign manager Nicole DeMont said in a statement late Wednesday.

"And are you guys buying that? Are you really buying that? Because this sounds like a Jussie Smollett part two," Lake told CNN, referring to the actor who was found guilty of falsely reporting a hate crime. "She's trying to deflect from her own abysmal campaign and the fact that you know, nobody even knows where her campaign office is."

Lake and Hobbs have been engaged in a bitter campaign for governor, and polls have shown the two locked in a tight race. Lake, who was endorsed by Donald Trump, has embraced and spread the former president's false claims that the 2020 presidential election was stolen. Trump and his allies, including Lake, have especially questioned the results in Arizona, where Joe Biden narrowly defeated him - the first time a Democrat took the state since 1996.

As secretary of state, Hobbs defended the election process in Arizona as the person in charge of certifying Biden's victory in 2020. She has called Lake a threat to democracy and earlier this month referred an incident of alleged voter intimidation to the U.S. Justice Department and the Arizona attorney general.

"There's a group of people hanging out near the ballot dropbox filming and photographing my wife and I as we approached the dropbox and accusing us of being a mule," said the report, which was written by a voter in the Phoenix suburbs and obtained by The Washington Post. "They took . . . photographs of our license plate and of us and then followed us out the parking lot in one of their cars continuing to film."

While Hobbs has defended the use of drop boxes as a safe and secure way to ensure ballot access, Lake has encouraged doubts and expressed support for citizen surveillance.

In July, Lake posted on Twitter a photo of a drop box she said was in northern Arizona. "Potential Mules beware: we are watching drop boxes throughout the state," she said. "Smile . . . you might be on camera!"

The Washington Post's Yvonne Wingett Sanchez contributed to this report.