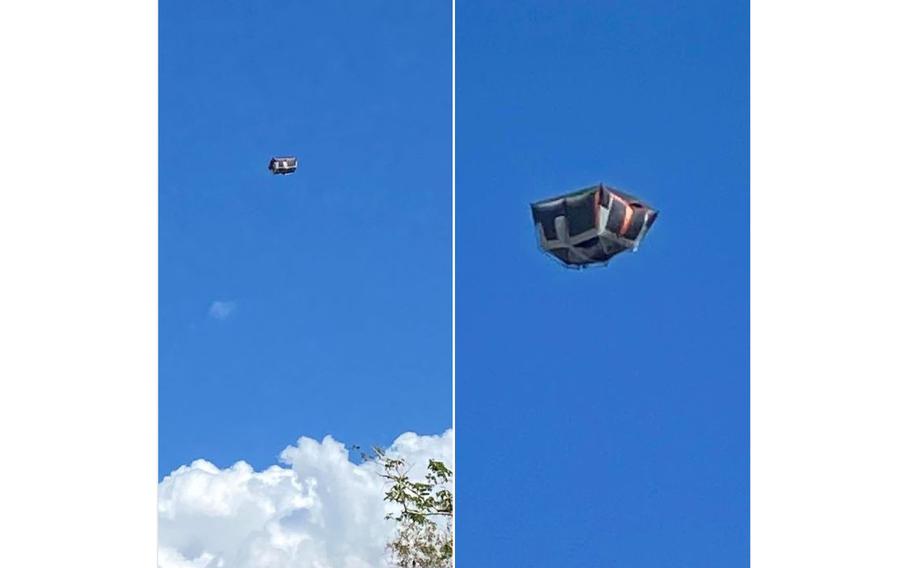 (Tribune News Service) — An upside-down tent was seen floating over Florida, but the strangest part of the incident is that many Floridians don’t seem surprised.

“Meanwhile, Florida continues to Florida,” one person wrote on Twitter.

Photos of the flying tent were posted on social media by meteorologist Matt Devitt of station WINK in Fort Myers, and he admitted “this was a new one.”

“How crazy is this?!” Devitt wrote in an Oct. 26 Facebook post. “Large tent spotted randomly floating high in the sky above Iona in Southwest Florida on Tuesday. Thankfully nobody was in it!”

The photo was credited to one of the station’s viewers, and Devitt had no doubt it was legitimate. He suspects the tent was “launched up by a surface whirlwind,” the same force often credited with sending inflatable bounce houses into the air.

Such whirlwinds happen when air near the ground heats and rises, prompting cooler air to fill the gap, Devitt said. The resulting swirl of circulation creates an “upward lift into the sky.”

Responses on social media have been laced with humor, including from Floridians noting they’re accustomed to seeing the extremes of nature.

Airbnb references, and a lot of fitting quotes from the “The Wizard of Oz” were also posted.

“This week’s sign that the Apocalypse is upon us,” Jeremy Seibert tweeted.

“Somebody missed a great opportunity to tie some ropes with a chair under that tent,” Mike Stanislaw said.

Iona is on the state’s Gulf Coast in Lee County.