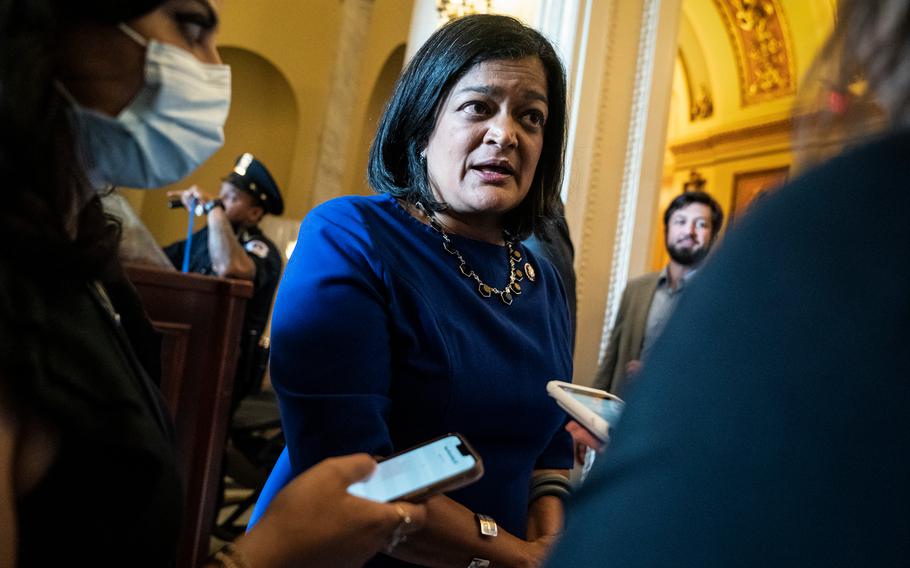 Rep. Pramila Jayapal (D-Wash.), chairwoman of the Congressional Progressive Caucus, has had her leadership called into question after the release of a letter that was drafted in July. (Jabin Botsford/Washington Post)

When Russian President Vladimir Putin this summer began escalating his threat of using nuclear weapons over the United States’ aid to Ukraine, the Congressional Progressive Caucus wanted to respond.

A two-page letter to President Biden, drafted in July, was meant to reaffirm House liberals’ belief that diplomatic engagement is critical at such points of escalation to avoid nuclear war. It was not meant to push the administration to take a radically different approach to foreign policy, according to several people familiar in the letter who, like others who spoke to The Washington Post, spoke on the condition of anonymity to discuss private conversations.

But the release of the letter was delayed for months, becoming public Monday and, in turn, shocking the signatories and many in the House Democratic caucus. Absent the critical timing of Putin’s nuclear remarks, co-signers were bombarded with questions from their Democratic colleagues and constituents about why they signed on to a letter that gave the impression liberals were advocating isolationism and direct negotiations with an authoritarian leader.

At the center of the frustration is Rep. Pramila Jayapal (D-Wash.), chairwoman of the Congressional Progressive Caucus, who was instrumental in coordinating the letter and its release, people familiar with the letter told The Post. The lack of clarity around the timing of its release particularly irked several co-signers, who said Jayapal should have communicated that and not doing so was unbecoming of a leader.

The fierce backlash led the CPC to rescind the letter Tuesday afternoon, with Jayapal accepting “responsibility for this” but blaming staffers for releasing it “without vetting.” Several Democrats, however, privately criticized Jayapal for blaming staff, noting she provided The Post with a statement about the letter upon its release Monday.

The CPC and Jayapal’s office have since declined several requests to comment on how the letter was drafted and why it was released Monday.

The internal uproar has brought back to the surface persistent tensions within the House Democratic caucus at a time when the party is fighting to keep their majority. The letter, several lawmakers and aides said, could undercut Democrats’ argument just two weeks before Election Day that they are the party that would continue to support Ukraine unlike House Republicans, who have signaled they would cut back aid if they gain the majority.

It has also brought into question Jayapal’s leadership ability as she weighs launching a bid challenging Rep. Katherine M. Clark (D-Mass.) if the second position in leadership opens up next term.

Dismay and deep frustration was expressed by several lawmakers and aides across the caucus Wednesday, but surprise at Jayapal’s actions were not. Several said Jayapal’s ambition to ascend to higher leadership has often driven her to act unilaterally and insert herself into issues and conversations.

Some House Democrats raised their eyebrows when they saw The Washington Post’s reporting on the letter Monday, which included a fresh statement from Jayapal. Leadership was also unaware of the letter, according to aides, which came as Speaker Nancy Pelosi (D-Calif.) met with leaders in Croatia to reassure them the United States would continue to back the Ukrainians.

While liberals often come to Jayapal’s defense for her ability to inject herself into key negotiations, some within the caucus she leads have all but unendorsed her bid for broader leadership. Though no one is seeking to challenge her as CPC chair, several liberals noted the debacle has left some questioning whether they would even support her to stay in that role.

“She can kiss her chances of leadership goodbye,” one person familiar with the effort regarding the letter said.

Those who support Jayapal and some frustrated with the situation acknowledged that she has worked to expand the CPC’s influence and bridge relationships with the White House so the liberals can be an active part of ongoing deliberations. In campaign calls to colleagues, Jayapal has touted the role she has played as CPC chairwoman to pass critical pieces of legislation, including the bipartisan infrastructure law and pushing the administration to sign executive orders on liberal priorities.

It’s a pitch that has irritated moderates who often found themselves at the opposite end of debates during the legislative process. Liberals objected to passing the bipartisan infrastructure bill last year unless the $3.5 trillion social spending package known as Build Back Better was attached, warning that unlinking it would prevent passage of Biden’s priority legislation. The tensions created headaches for the party that had a narrow majority to enact bills in Congress.

Moderates, including the most vulnerable members, were often frustrated by liberal demands that they believe stalled passage of legislation they wanted to tout on the campaign trail. It’s an underlying tension that has remained consistent since Democrats regained the House majority in 2018.

The immediate worry by some members Wednesday was that their own colleagues were undermining Democrats’ united front in supporting Ukraine as House Republicans begin to argue that the U.S. should no longer send fiscal aid to help them defeat Putin. The letter Monday argued for the administration to look at other avenues alongside aiding Ukraine fiscally to prevent a never-ending war. But the statement withdrawing the letter acknowledged the language was “being conflated” to what Republicans have discussed. “Nothing could be further from the truth,” the statement said.

“We need to stay focused as Democrats to win our elections and hold our majority, and as a nation, Democrats and Republicans must make sure we support the Ukrainians,” said Rep. Bradley Schneider (D-Ill.), who chairs the moderate New Democrat Coalition Action Fund. “This is an attack on democracy globally, and that’s why we definitely have a stake here. We all should be concerned about the threat of escalation. We also can’t Putin bully us.”

Without the backdrop of escalated talks of nuclear warfare, co-signers - some of whom serve on foreign relations-related committees - publicly noted that they would not have signed onto the letter today. Rep. Sara Jacobs (D-Calif.) tweeted, “Timing in diplomacy is everything.” Rep. Mark Takano (D-Calif.), who chairs the House Foreign Affairs Committee, put out a statement clarifying that he has “remained steadfast in support of the Ukrainian people” and Biden’s leadership.

The unilateral actions by the CPC was unsurprising to some front-line Democrats, the most vulnerable swing-district members working to keep their seats and the House majority. They believe they fight different battles than safe-seat Democrats like Jayapal who, they say, can think about other priorities without risking electoral consequences from their constituents.

In an interview earlier this month, Rep. Elissa Slotkin (D-Mich.) noted that her “peers from easy districts are so sensitive” to criticism when trying to strike a compromise.

One person close to the progressive caucus said activist groups can often pressure or influence the caucus, especially on foreign policy. It remains unclear whether outside groups influenced the content of letter or the timing of its release, but several endorsed the letter, including The Quincy Institute, which was one of several outside organizations that endorsed and advocated for the letter after seeing an early version.

“The CPC is often outside the norm on foreign policy and that’s a fine place to be during the Trump administration, but not when there’s a big war and in October of a midterm in a Democratic administration,” the person said.

Though questions around the timing of the letter’s release remain, some lawmakers and aides believe the crux of it stands, noting Biden warned earlier this month the “prospect of Armageddon” is the highest since the Cuban missile crisis because of Putin’s remarks. The letter notes Biden himself said there will have to “be a negotiated settlement” to end the war.

One person who has a formed a close relationship with Jayapal over the years is White House Chief of Staff Ron Klain, who did not come to her defense Wednesday.

Still, many Democrats and even some Biden administration officials did not find the letter highly objectionable. They noted that the progressives stressed their support of Biden and his work maintaining support domestically and abroad for the war and did not threaten to cut off funding, but thought the letter’s rollout was clumsy and ill-timed.

The White House did not think the letter was a big deal when officials first received it, a White House aide said, noting that the lawmakers went to great pains to praise Biden’s approach to Ukraine and expressed support for economic and military packages.

Officials did not view it as a major break from Biden’s policy but made clear they would not change their approach because of the letter. White House spokesman John Kirby said the United States would not have conversations with Russia without Ukrainian leadership being represented. Kirby also noted Ukrainian President Volodymyr Zelensky has said he does not think it is the time to begin a negotiated settlement with Putin and that U.S. officials respect his opinion.

“I thought the letter was pretty harmless,” Sen. Chris Murphy (D-Conn.) said. “But my only worry was that it was going to create the impression that there was a big group of Democrats pushing for immediate diplomacy and that obviously is not the case given that many of the signers of the letter did not seem to understand what the implications of it would be.”