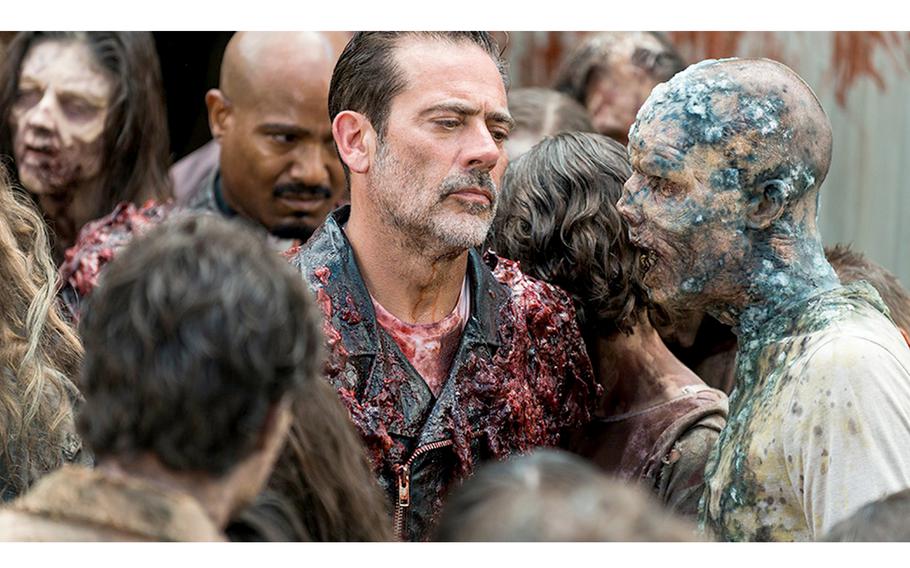 Some of the living in "The Walking Dead" covered themselves in entrails to fool zombie noses. (AMC)

Zombies are just regular people, or at least they were before — well, you know.

With that in mind and with Halloween approaching, The Washington Post asked experts in several fields to address some zombie mysteries based on what is known about human bodies and brains. They busted some tropes (aww!), left the door open on others (eek!) and made educated guesses about how and why zombies do what they do.

Unfortunately, few theories have been tested, mostly because zombies — human ones, anyway — are not real.

A few undead outliers fall in love, sprint at superhuman speeds and even cheerily sell real estate, but thanks to (en)trailblazing horror film director George A. Romero, the stereotypical pop culture zombie is blank-eyed, ravenous and plodding.

Why is that? Perhaps because they’ve lost function in key parts of their rapidly decaying brains, said Carnegie Mellon cognitive neuroscientist Timothy Verstynen, co-author of “Do Zombies Dream of Undead Sheep?”

They may be constantly attacking because the decision-making areas in the prefrontal cortex are damaged, Verstynen said. Without that calm, thoughtful counterweight, the amygdala’s fight or flight response runs amok. (Plenty of zombies probably also choose flight over fight, but they just shuffle away and don’t get much screen time.)

Even friends and family are fair game, perhaps because damage to a set of brain regions called the core face network means they can no longer distinguish a friend from a potentially tasty stranger.

That insatiable appetite is a clue that the hypothalamus has gone haywire and is overproducing the hunger-stimulating hormone ghrelin, dooming them to be perpetually hangry.

They can rarely growl out more than a few words, a sign of deterioration in the language centers, called Broca’s area and Wernicke’s area.

Finally, that lumbering gait may mean they’ve lost some of the many brain areas that coordinate to make our movements smooth and effortless, such as the motor cortex, the basal ganglia and the cerebellum.

Verstynen said he once asked Romero why he made zombies walk the way they do. His simple answer: “Because they’re dead! I assumed they’d be stiff.”

Their favorite food, however, cannot be attributed to Romero. People who are not actually undead lumber down a street in Silver Spring, Md., for the 2013 Zombie Walk. (Bill O'Leary/The Washington Post)

How long could a body live on brains?

On-screen zombies weren’t always bloodthirsty, brain-hungry or even dead, said Middlebury College professor Patricia M. Saldarriaga, who co-wrote the book “Infected Empires: Decolonizing Zombies.” They usually were — and often still are — metaphors for different types of oppressed people, she said, although in a modern twist, some now represent establishment power.

The earliest 1930s film versions were still-living humans whose souls and free will were stolen by dark magic, similar to the zombies of African and Haitian voodoo and folklore.

Then came Romero’s “Night of the Living Dead” in 1968, which completely redefined zombie death status, behavior and dietary habits, and since then, most of the on-screen undead have been content to nosh on just about any human flesh.

However, we often think of brains as prime zombie cuisine thanks in part to Homer Simpson. In 1985’s “The Return of the Living Dead,” a zombie demanded “braaaaaaains!” for the first time, which could easily have been chalked up to his own odd palate. But after a 1992 segment of “The Simpsons” featured brain-seeking zombies who were disappointed by Homer’s empty noggin, the idea of zombies eating brains seemed to stick.

Diet-wise, zombies had basically gone keto, said Grace Derocha, spokeswoman for the Academy of Nutrition and Dietetics and a registered dietitian.

Nutritionally, brains are about 60% fat and 40% protein with little to no carbohydrates, she said, consistent with the very low-carb, high-fat ketogenic diets originally developed to reduce seizures in children. By contrast, roughly half the calories in a typical, healthy human diet would come from carbohydrates, which provide quick energy.

Derocha said “keto flu,” a common reaction to the sudden lack of carbs, might be responsible for some of zombies’ symptoms: “They’re moaning, they’re very slowly walking around in a daze with brain fog.”

However, Diet Z is not all bad.

Brains would provide a decent amount of fluids — they’re 80% water by weight — and nutrients that zombies would need, such as energy-boosting vitamin B12, vitamin C to bolster connective tissue and bone-strengthening phosphorus, copper and iron.

A brains-only menu would be sustainable for a few weeks at most, Derocha said, because it would lack critical nutrients, vitamins and minerals. (She said it also would be extremely constipating, but noted that she wasn’t sure whether zombies go to the bathroom anyway.)

Humans have extremely strong bites for our size, according to a 2010 study out of Australia, and our teeth are pretty good at cracking nuts. But skulls, not so much, study co-author Stephen Wroe said in an email.

“Our gape is not sufficiently wide,” he wrote. “Our teeth aren’t adapted to bite into bone; they’d break. With the right shaped teeth — then maybe. But to be honest, you’d have to run some experiments to be sure.”

This story may be updated if future skull-biting experiments prove otherwise.

Why don’t they eat each other?

So they’ll chomp their living friends and family, and at least a few prominent zombie influencers will eat brains. Why not each other?

For this question, four researchers from the Monell Chemical Sciences Center offered their expertise in the senses of taste and smell, noting that some zombies, such as those in “The Walking Dead,” rely heavily on sniffing out humans.

Bob Pellegrino, a postdoctoral fellow at the center, said he immediately thought of mosquitoes and wondered if zombie bodies no longer produce the special smells and chemicals that make live humans seem tasty.

Mosquitoes “are kind of bloodsuckers as well, and they use a range of cues to find humans,” Pellegrino said. “They use CO2 from a long distance, then they use smell from a midrange, and then they use taste, heat and humidity for very short range for landing and actually attacking. If you knock some of those out, they do a bad job at finding the hosts.”

He also suggested zombies may be just as repulsed by the idea of decaying meat — not to mention the slurpy, gooey sounds of eating it — as they would’ve been when they were alive.

“I’m guessing rotten flesh is pretty mushy, and mushy is definitely one of the top contenders for an aversive texture,” Pellegrino said. “Texture is also very much tied with sound, so you’re going to get pretty gross sounds with grosser textures.”

Paul Wise, a longtime Monell scientist, suggested that the zombies may smell illness on each other, especially if they’ve been zombified by a virus.

“Zombies might smell volatiles associated with biological responses to the infection, and decide there’s no reason to bite you since the virus has already been transmitted,” Wise wrote in an email.

Or perhaps they sampled a colleague early in their zombie journey and learned a lesson.

“If zombie brains didn’t agree with them, or didn’t satisfy the cravings the way that living brains did, they’d learn to pay attention to the odor signals quickly,” Wise wrote. “Of course, in life they would probably have learned to avoid the odors of decay already, so maybe it would just be natural for them to avoid munching on each other.”

Stephanie Hunter, Pellegrino’s fellow postdoctoral fellow, suggested that they may just like the freshest food. “If they get to a person and they’re eating them, and then they see a new person, they will also go for the newer person even though the first person still isn’t rotted yet,” she said.

The fourth scholar flat-out rejected the premise of the question.

“My scientific mind says it is highly likely that they eat each other,” emailed Ichiro Matsumoto, a molecular biologist. “But humans don’t know they do.”

First, he said, humans have no population data on zombies, so they could be eating each other and we’d never notice the decrease. Second, humans make terrible observers of zombie behavior because we are always either fleeing or being killed by them. No one sticks around to do a proper observational study.

“I’m afraid humans just assume they don’t eat each other without any compelling evidence,” Matsumoto concluded.

Could a zombie claw out of a grave?

There is data on this one, sort of. Even a highly motivated zombie probably couldn’t clamber through 6 feet of dirt, because that much earth on top of an average-size casket easily could weigh more than 7,000 pounds.

Rules vary widely, but most U.S. burials occur far closer to the surface, with the top of a burial container often less than two feet below ground. South Carolina, for instance, requires just 10 inches.

Ellen Wynn McBrayer, spokeswoman for the National Funeral Directors Association, posed the zombie-escape question to crew members at the cemetery she owns and operates outside Atlanta.

“The consensus was if a zombie or a human that turns into a zombie is in a vault, they’re not getting out of the vault,” McBrayer said. “And most of your caskets would probably not allow them to get out of that either.”

McBrayer noted that, according to data from the funeral directors association, about 60 percent of people who die in the United States are cremated — an unquestionably zombie-proof process. But she said eco-friendly “green” burials, with depths of around two feet and minimal body coverings, are growing in popularity.

So if a zombie is reanimated in shallower ground, and is contained only in a flimsy casket or just a shroud, the crew liked the zombie’s chances of clawing out a lot better — especially when the grave is fresh and the dirt on top is dry and loose.

McBrayer said the team “enjoyed brainstorming about something that we don’t have to ever worry about,” although of course the idea wasn’t new to them.

The cemetery is sponsoring a zombie-themed 5K run this Halloween, and its logo is a headstone with one lone arm popping up out of the ground.