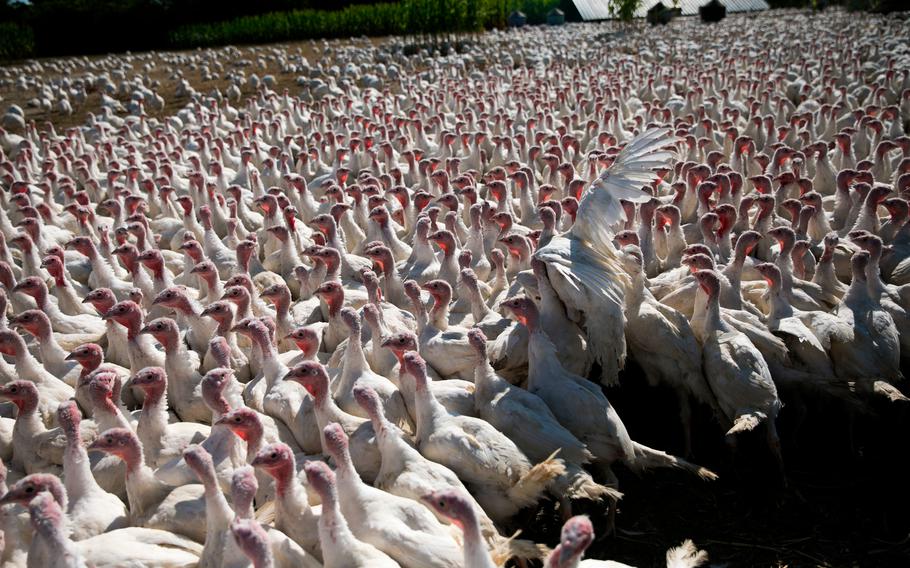 LOS ANGELES — With Thanksgiving fast approaching, turkey farmers from California to Pennsylvania are watching in horror as a virulent new strain of avian influenza wipes out their flocks, killing birds practically overnight and forcing hundreds of thousands more to be euthanized to prevent further infection.

The rampant spread of the virus has already eliminated more than 6 million turkeys nationwide, about 14% of the nation’s total turkey production, according to the U.S. Agriculture Department. It is leaving farmers short of their usual offerings and pushing up prices for those that remain, forcing consumers already walloped by inflation to pay an additional 20% or more per pound for Thanksgiving turkeys compared with prices last year, according to several estimates.

“It’s devastating,” said Heidi Diestel, whose family has operated the Diestel Family Turkey Ranch in Sonora, Calif., for four generations. The ranch lost more than 150,000 turkeys in August after avian influenza infected one of its flocks.

Although they still have several other healthy flocks of turkeys on separate farms, Diestel said certain turkey varieties they have been accustomed to selling, such as their “petite” brand that are only six to 10 pounds, were pretty much wiped out.

“It was really a sad time to see that many birds pass to something that was that aggressive and that uncontrollable,” Diestel said. “It definitely did impact our availability and supply, and we won’t have everything for everyone like we normally do, we just won’t.”

Diestel’s story is far from unique in California or the nation as farmers and wildlife specialists confront what is shaping up as the deadliest avian flu outbreak in the nation’s history. In California alone, seven turkey farms have been hit, resulting in some 485,000 birds killed by the virus or subsequently killed to stem the spread.

The virus largely originates with wild birds, which can infect all kinds of poultry via their droppings when they fly over farms. But turkeys seem uniquely vulnerable, according to California State Veterinarian Annette Jones. As hundreds of millions of wild birds migrate southward across North America in the fall, broilers and laying hens can be stowed indoors in barns out of harm’s way. Many turkeys are pasture raised, without indoor accommodations for all those big birds; it could also be that the virus has mutated in such a way that turkeys are a better host, Jones said.

Bill Mattos, president of the California Poultry Federation, said there has already been a run on turkeys, with California sellers committing all available product to supermarkets or other customers.

“I get a lot of calls from politicians and others who want to donate birds to charity,” Mattos said. “I tell them, ‘I can get you chickens. I can’t get you turkeys.’ “

The Centers for Disease Control and Prevention says the virus poses a negligible health threat to humans. Only one confirmed human infection has been reported thus far, and that was someone who was working closely with stricken fowl.

But for birds, this year’s avian flu outbreak is on track to surpass the outbreak in 2015, when 50.5 million birds died in what was then the nation’s worst animal-health event.

The USDA says 44.6 million birds — including more than 6 million turkeys — have died from the virus or been “depopulated” due to exposure so far this year.

Spring was especially rough for laying hens, and then a slowing of infection during the summer caused many farmers and agricultural experts to think the danger had passed. But it picked back up again in September and October with especially devastating effects for the country’s 2,500 turkey farms — just in time for the holidays.

“I was hoping we wouldn’t be having this conversation, but we’ve seen a resurgence in the fall,” said Courtney Schmidt, a protein sector analyst for Wells Fargo. “The bottom line is you’re going to be paying more for your Thanksgiving turkey.”

The big question for turkey farmers, Schmidt said, is what happens if the virus sticks around. As with the coronavirus, it is uncertain when or how the virus will play itself out — if it ever does.

“Experts are expecting this to evolve into something we have to deal with year-round, with it surviving in the warmer months in wild birds,” Schmidt said. “We are watching closely.”

Rosemary Sifford, the chief veterinarian for the Agriculture Department, said in a statement that the agency believes the virus “will continue to infect wild birds and will bring an elevated risk to domestic birds, especially during migration seasons.” She said it is critical for bird owners to “maintain vigilance” in keeping wild birds away from poultry and domestic birds.

While both the 2015 virus and the 2022 virus were Eurasian lineage strains of highly pathogenic avian influenza, the reason for the dramatic uptick this fall is because this is a different subtype of the virus. Most avian flu viruses, including the one in 2015, were killed with the dry, hot temperatures in the summer.

This year’s subtype of the virus has been much more persistent in wild birds, so they are carrying it back with them as they migrate — something that happens in North America in the spring and in the fall. More than 85% of the cases this year can be traced to wild bird introductions, compared to about 30% of the cases in 2015, according to the USDA. This subtype is also adaptable to many species of birds and is living in waterfowl longer than the virus has in the past.

While wild birds may carry it without becoming sick, infected domesticated chickens and turkeys may exhibit tremors, trouble breathing and extreme diarrhea followed by a swift death. The USDA has scrambled to educate poultry businesses about best practices and how to identify signs of illness, which experts say has a 90 to 100% mortality rate in turkeys and chickens within 48 hours.

The virus kills so quickly that multiple dead or dying birds can be the first sign a flock is infected. Farmers take samples that are typically first sent to a state lab and then on to the USDA’s National Veterinary Services Laboratories in Ames, Iowa, for confirmation. A positive case triggers a public announcement, and the USDA’s Animal and Plant Health Inspection Service shows up to kill the affected flocks to prevent spread. This is necessary because of how extremely infectious the virus is.

The agency says its goal is to kill infected flocks within 24 to 48 hours of diagnosis, often using carbon dioxide or a water-based foam, the consistency of firefighting foam, that flows up and over, suffocating birds in seven to 15 minutes.

In May, Agriculture Secretary Tom Vilsack approved $400 million to directly support the response efforts and to pay affected poultry farms. Additionally, some poultry farmers have avian flu disease insurance. But the ordeal, including costly cleanup, can mean catastrophic losses, which often are not entirely covered by USDA payouts, according to Beth Breeding, spokeswoman for the National Turkey Federation.

Wells Fargo analyst Schmidt said going into this fall, U.S. turkey production was already down quite a bit, with third-quarter production down 11% from a year ago. She said higher feed and fuel costs, labor shortages and other head winds have caused some contraction in the industry, which will further impact price. Exports are down 21% this year and imports are up, she said, which may improve availability a bit heading into the holidays.

That may be cold comfort for the farmers who are on the front lines watching the virus do its worst.

“I just think there’s a lot of compassion that should be had for the farmers across the country that are dealing with it,” said Diestel, the California turkey farmer. “If you’re the farmer standing there looking at a perfectly healthy flock of birds and you think of a 99% mortality rate in the flock, it’s devastating.”