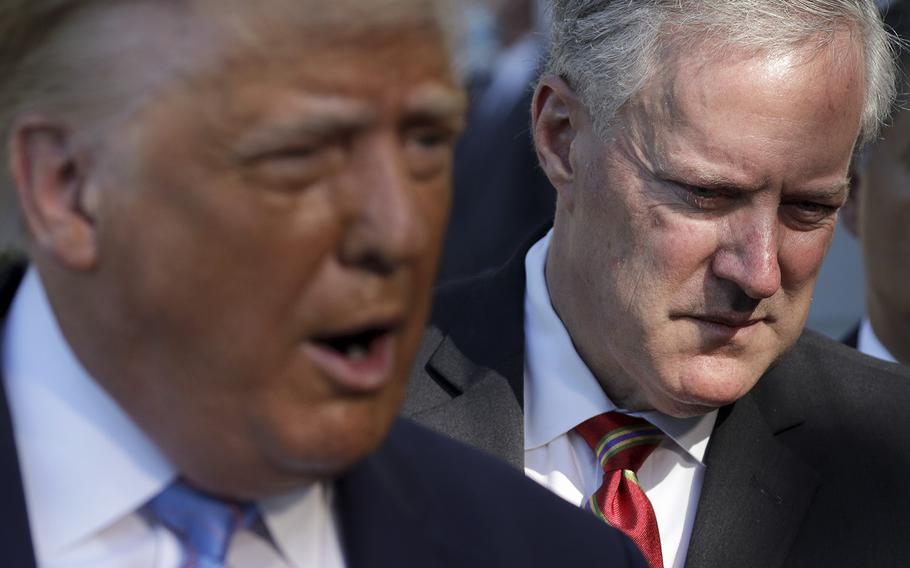 Then-President Trump and Chief of Staff Mark Meadows at the White House in 2020. (Alex Wong/Getty Images/TNS)

Following a 45-minute hearing in this small city in the foothills of the Blue Ridge Mountains, Circuit Court Judge Edward W. Miller denied Meadows’ attempt to quash a petition seeking his testimony, and said that appearing in Atlanta would not present an “undue hardship.”

“Well, you have eloquently enumerated your arguments, which I think perhaps an appellate court can review, but based on what’s before me today I’m going to find that the witness is material and necessary to the investigation,” Miller told James W. Bannister, Meadows’ attorney, from the bench.

Bannister told reporters after the hearing that he planned to appeal the ruling to the South Carolina Court of Appeals, but shortly afterward issued a statement saying “we are looking into legal options based on the judge’s ruling from the bench.”

“It would be inappropriate to comment further on these issues until the Judge has issued a final written order,” the statement said.

The Fulton County district attorney’s office, which is advising the grand jury and sent a prosecutor to the hearing to answer questions, declined to comment.

The arguments were held in Pickens, about 20 miles west of Greenville, because Meadows resides here. Since he does not live in Georgia, the Fulton DA’s office needed a local judge to sign off on the summons, technically known as a certificate of material witness, for it to be enforceable. Like other witnesses who have fought their subpoenas, Meadows did not attend the hearing.

The former North Carolina congressman is at the center of several events of interest to the grand jury, including the infamous Jan. 2, 2021, phone call he helped facilitate between then-President Donald Trump and Georgia Secretary of State Brad Raffensperger.

During the hearing, which was sparsely attended, Bannister peppered Deputy Fulton DA Will Wooten with procedural questions about how the 23-person special grand jury works. He also asked about previous challenges from other subpoenaed witnesses, drawing exasperation from Miller at some moments, who insisted the hearing was not meant to be “political.”

Bannister pointed to Meadows’ pending litigation against the U.S. House’s Jan. 6 committee in federal court, in which the former Trump aide is citing executive privilege to argue he’s immune from testifying.

“Determining whether or not Mr. Meadows is material ... should be guided by what comes out of that federal decision in federal court,” Bannister said. “In other words, if executive privilege covers all these issues, then I would be able to stand in front of you and say ‘judge, nothing they’ve named isn’t going to be covered by executive privilege, and therefore he can’t be a material witness because he can’t offer any testimony.’”

Pick’s lawyers argued that the Fulton special grand jury proceedings are civil, not criminal, because they don’t have the power to indict, and that she subsequently can’t be compelled to testify under interstate guidelines for witnesses. Fulton Superior Court Judge Robert McBurney, who is overseeing the grand jury, has stated that the proceedings are indeed criminal, but several judges on the Court of Criminal Appeals of Texas expressed skepticism in their ruling on Pick’s challenge.

In another echo of Pick’s strategy, Bannister argued Meadow’s summons is now moot, since his originally scheduled testimony date of Sept. 27 has come and gone. But Miller appeared unmoved.

The Fulton district attorney’s office offered to reschedule Meadows’ testimony for one of four alternate dates after the November elections in a recent affidavit.

The original petition seeking out Meadows’ testimony was approved in late August.

In addition to the Raffensperger call, prosecutors said they’d like to question Meadows about his surprise visit to a Cobb County audit of absentee ballot signatures in Dec. 2020. Also of interest is a Dec. 21, 2020, White House meeting Meadows attended with Trump and members of Congress, during which the certification of Electoral College votes from Georgia and elsewhere was reportedly discussed.

Wooten said Wednesday that prosecutors are also interested in emails Meadows sent to top Justice Department officials in late 2020 making allegations of voter fraud in Georgia, as well as Meadows’ “own unique knowledge about the coordination, execution and communications” regarding the above events.

Even though Meadows has avoided testifying so far, his onetime aide Cassidy Hutchinson is reportedly cooperating with Fulton prosecutors. Her attorney did not respond to a request for comment.

MEADOWS AND THE FULTON GRAND JURY

Fulton investigators say they’re interested in questioning former White House chief of staff Mark Meadows about several events he was involved in following the 2020 elections. Among them:

— His participation in a Dec. 21, 2020, White House meeting with President Donald Trump, members of Congress and others in which they allegedly discussed voter fraud and the certification of Electoral College votes from Georgia and other states.

— His unannounced appearance at an audit of absentee ballot signatures in Cobb County on Dec. 22, 2020.

— His involvement in then Jan. 2, 2021, phone call between Trump and Georgia Secretary of State Brad Raffensperger.

— Emails he sent to top Justice Department officials in late 2020 in which he made allegations of voter fraud in Georgia and elsewhere and requested an investigation.